Bf110 totally useless as a fighter?

I think they pretty much are in a 1v1 situation.
But when they have a numbers advantage, they can be pretty effective.

I’ve had great success with Bf110s over the years, going all the way back before European Air War even to Aces over Europe.

The issue is the fighting style is different. I personally often have a tough time with a 109 vs Western or Russian planes, but in a 110 I can clean up. My style is most effective at extremes–I do well in really heavy fighters like a 110 or really light ones like an La-5. The mid-weight planes can really present a challenge.

Yes, 1 v 1 is a poor choice, but the 110 wasn’t designed for that. Most missions where I do really well the 110 is just one of several types of birds on the Luftwaffe side. While the lighter planes dart and weave and jockey for position, I set up my attacks with care and pick them off while they concentrate on other targets.

Another benefit is the nose-mounted gun location makes it more effective in snap shots against crossing targets compared to planes with dispersed nose/wing mountings. Having a tail gunner helps when someone tries to get on your six since you usually can’t break and escape.Instead, you make your attacker break off to try and save themselves.

Heavy fighters aren’t for everyone, I know some pilots who do nothing but flail about and die in them but are very good in 109s. If you can play to their strengths and avoid their flaws (namely the lack of agility) you can be formidable.

Yeah…the Germans figured that too.

Don’t treat a heavy fighter like a light fighter and you’ll be fine. Play to the advantages, not the disadvantages.

Also as a nightfighter it was superb. Daylight bomber interdiction not so much, but the 110G (IIRC the model correctly) was one of the best night fighters of the war.

Also as a nightfighter it was superb. Daylight bomber interdiction not so much, but the 110G (IIRC the model correctly) was one of the best night fighters of the war.

Yes, I have heard alot about its night time fighting. Didn’t they mount radar on the nose? 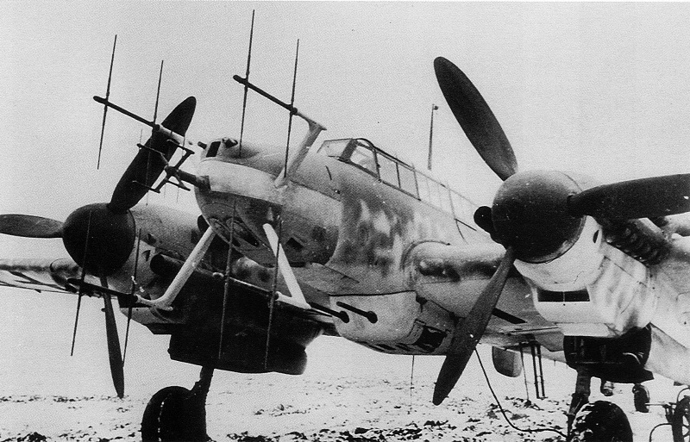 The screens for that radar were also a very interesting design. Not easy to read but with a bit of practice you could really use it to sneak up to a bomber and use a bit of “schräge Musik” on him.

Interestingly enough, the majority of night kills weren’t with schräge musik and the aces who go them, didn’t prefer the schräge musik. From doing some reading on the issue: it basically seemed be that if you could get into position for an attack from below safely, you could probably have safely executed the attack with nose guns anyway. They added a decent bit of weight and shifted the CG of the AC around too.

what are those guns under the body ayone know?

There was a pilot in Cliff of Dover flying often in Stormmof War server wich was very good!

He picked well his kills, and always knew what to do! If defensive he moved to the rear gunner and was a really sniper! After being bitten some times you started treating him with great respect!

Also esperienced a pair making superb teamwork! Flying aggressively and protecting each other with tatch wave tactics! They were a pleasure to watch and fight against!