The very unreliable news sources are saying it was a go around that went wrong. If that is true (who knows given how terrible the news is at disseminating information)…then it would appear they missed the whole “positive rate” part of the go-around. I’d guess that a 777 doesn’t transition instantly from the landing flare to go-around… I seem to recall some stories of B747 and similar aircraft conducting go-arounds in CATII/III conditions actually touching down briefly as they did so.

Here’s a page (in german, but pictures say a lot) showing the wreckage, and more importantly: Is it just me or is there an explosion blowing the roof away? That video you posted…it looks pretty darn foggy there. Not like 1/4 mile though…just regular old 200 and 1 mile type fog maybe… It will be interesting to hear if they forgot to put the gear down (unlikely) or just raised it too soon on the go-around (more likely) and sunk into the pavement…

Possibly. The article says it was pretty windy though. Perhaps they had a gust of crosswind and touched down with one landing gear which then collapsed.

Amazing how calm the coverage of this accident is compared to the Asiana crash in SFO. On CNN’s online report of the accident, there is a copy of a tweet giving kudos to the airline for the quick evac. True, that’s great. But the airline had a pretty violent accident. The coverage isnt propertional.

I would go with AV Herhald for incidents and accidents. It’s the only news website that properly sources and verifies the information including follow up accident investigation reports:

Amazing how calm the coverage of this accident is compared to the Asiana crash in SFO.

Well, I’m not sure how fast people jumped on Asiana - but there already appear to be differences. Asiana was a purely visual approach in very good weather. There was no go around, it was just a poorly flown approach. So far it looks like the Emirates was shooting an approach to pretty low weather, did conduct a go-around for whatever reason, and then crashed. Still a really poor showing…but perhaps not as bad as driving a plane onto the rocks during a purely visual approach. (I guess…I dunno…)

Regarding the vapor coming from the vents and sidewalls, I have only seen that on the ground or in flight as a hot airplane cools. I have never seen it from a cool airplane descending into warmer, more humid air. (But then again, LAS is as close as I have come to a Dubai-like environment. Density altitude always plays a roll because you have less performance potential and higher true airspeed. But in the case of Dubai it is no worse than Denver on a 30C day. Meaning it is well, well, well within the capabilities of an overpowered 777 at max landing weight. This was an error of some sort. The only question will be: was it a crazy stupid error like Asiana or an understandable error like …take your pick, most of the rest.

Yep, 120F+ in Freedom Units. Dubai is at least at sea-level, but the heat there is brutal.

How many meters is that?

Since Dubai is at sea level the answer is 1146 meters I guess.

Joke aside, density altitude could play a role in that, couldn’t it? At those temperatures the difference looks quite severe. 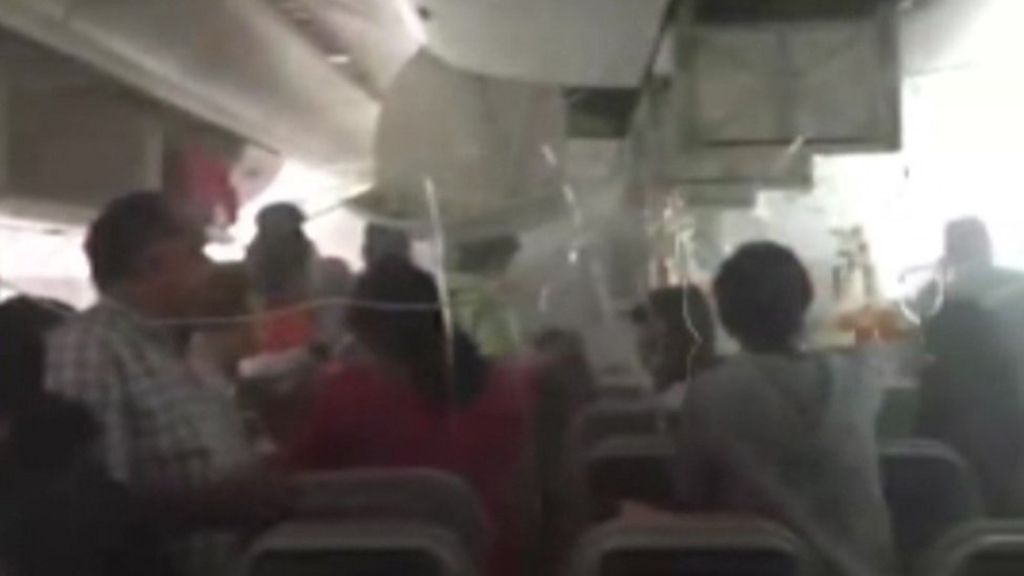 Firefighter killed battling blaze after Emirates Boeing 777 crash-landed, but all 300 on board were evacuated safely.

Has a video from inside the aircraft after the landing. Arent you suppose to leave the overhead luggage? Anyway

As we were landing there was smoke coming out in the cabin," said Sharon Maryam Sharji.

Depends on what part they are talking about, as soon as the aircraft touches the ground with the wheels up I would expect the Airco packs having a hissy fit and just pushing in whatever is in the air.

I’ve read someone that it’s a standard response of people to get their luggage, psychological effect due to the crash, not quite sure I fully understand how it works but somewhere a psychologist is being very happy with the footage.

The same thing happens with fire alarms, you want to rescue as much of your belongings as possible. Life is not worth it if your phone melts… or something.

The “smoke” as they were landing was probably condensation from the air condition vents. Just a guess.

That is condensation, otherwise those people would be feeling it on their lungs and you would hear coughing.

I wonder why though, perhaps some systems got shut down for safety reasons? I am a bit at a loss what exact sequence of events would cause it to stream in like that, obviously the pumps are still operating so a part of the aircopacks are atleast doing their thing. Perhaps the water seperator failed?

Well, that video isn’t from the incident flight. And I’m speculating on what the passenger reported as “smoke”. I don’t know much about Dubai - so I’m not sure what 110 degrees at what humidity level is. Typically you see that fog coming from the vents when the ground service cooling is working at a maximum and the fog isn’t necessarily coming out of the vents, rather, it is being created instantly as the air exits the vents at a cold temperature. The cold air coming out of the vents cools the much warmer, moist air in the cabin. Colder air can’t hold as much moisture, thus, it precipitates out in the form of that fog. Really it is mostly just a reaction between the cold (dry) air coming out of the vents and the warm, moist air in the cabin. We see it a lot in the Carolinas…very hot, very humid here…

Aha fair enough, I thought that was from the incident flight.

I suppose if one of the engines that feeds one of the airco packs shuts down then I suppose condensation might set in due to the lack of warm air.

This forum software is weird. I meant to add a new post and somehow edited a post above.

Let me rephrase that: I’m weird. And I seem to be incompatible with the software the drives this forum.