Building a server box...what do I need?

How about something like this - still not enough horsepower on the chip (i3-9100)?

That would probably good enough!
My i3 was a 2 core, 4 thread model.

That being actually 4 cores - it has practically double the performance and about 30% better on the single core performance more importantly.

You may or may not be able to actively use multiple game servers at the same time - that we’d need more data on from the various programs. I don’t think you’d have any trouble using one at a time (can probably run others so long as they idle when nobody is there).

(I haven’t tried any setups in the mid range for server - I had my old I3 and skipped to a 9900k. WreckingCrew’s Hollo Pointe ran on a quad core but it was an older generation one that didn’t have the single core performance - 6th gen I think.)

Here’s a live screenshot from HPN while running one of @Franze’s complex missions: 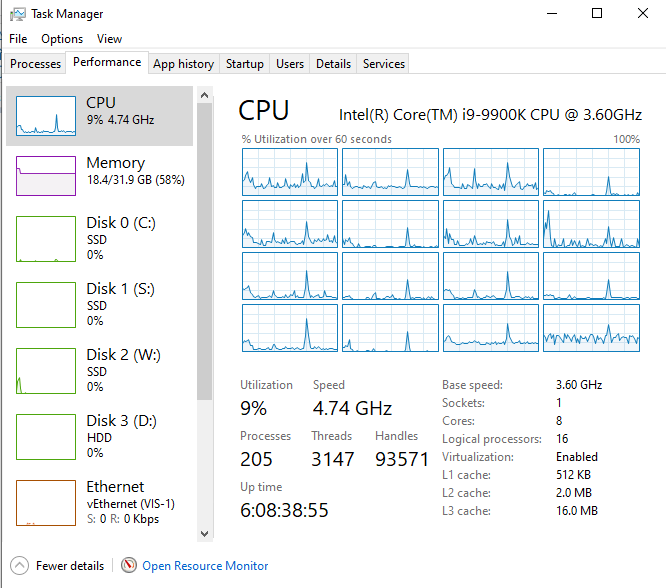 DCS Server is using about 13GB of RAM with this complex scenario running on the Syria map.
Only really active programs are iCue and Acronis True Image (which has a anti-ransomware type engine but I haven’t noted it to be too invasive). Windows being about 5GB of RAM otherwise seems typical.

Edit: changing to a static mission on Caucasus brings the DCS RAM down to about 7GB and the system total to 12.6GB.

Thanks…I’ll put that one on the list… I do see some perhaps more affordable options on refurbs that are popping up…this one has a i7-4770 (not a K though) but seems to compare favorably (about even) with the Dell…but nearly $300 less:

If you are new enough that you get the LGA1151 (6th gen) and up, you’d have a lot of options if you need to change out a CPU.

Ha I know that case!

(These are all 2nd gen i5s - much slower

Haha…they are waiting to become sentient to form an army!

I think I’ve decided to feature creep my way up…this one still has a pretty small form factor, and seems to get me where I might want to be with regards to processing power (i7-10700):

That’ll not only work now, but still be relevant for a while, run multiple servers etc.

Did you have any other usage plans besides game servers?

Did you have any other usage plans besides game servers?

Not too much. I sometimes think media server…but honestly with Netflix streaming directly to the TV and other stuff, I don’t ever think I’m going to need to do that. I have a Synology DiskStation that I use for vacation videos and photos…so no real need to tie that to the server.

Well the CPU price difference is about $160 USD there, RAM maybe $100? So not entirely out to lunch.

No all good. It just depends on how much creep is on Beachs menu today

Alrighty…an enjoyable morning of shopping around…I very much appreciate the advice given! I did settle on the Inspiron 3880:

I think that should cover the bases for now. Kind of nice that it comes with W10, mouse, and keyboard too since that completes the package. If it is just running on the floor…can I virtually access it through my primary PC so I don’t have to hook a monitor up to it?

West Coast is waking up…

Do you sell all your old hardware then? You seem to update PC’s quite a lot, and got new systems for the boys, so my thinking was isn’t it worth trying to run a local server on an older CPU/motherboard/RAM you must have discarded?

If the old hardware doesn’t work then upgrade etc, but for 2 or 3 people playing on a LAN you could get away with a pretty lowly set-up I would guess.

Yes.
You can use something like AnyDesk, or go the easy route with Google Chrome Remote Desktop if you have a Google account already.

TeamViewer is on the blacklist now, they like to lock accounts for commercial use all the time on Home users.

Do you sell all your old hardware then?

- other than that, all I have is some older laptop computers.

all I have is some older laptop computers.

Could be worth a try, I bet they’ve got some serious hardware in them, as you probably used them for sims!

(This message brought to your by the Church of Consumerism Prevention™ )