Cactus 1549, the Miracle on the Hudson

It’s been a decade, already… 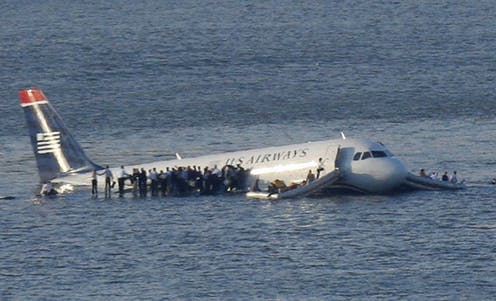 The crew (especially the pilot) did a great job there.
I remember hearing the radio comms for the first time, and despite knowing that they would be fine it gave me goosebumps.
He needed a few seconds then he said “it’s going to be the Hudson” and then just did it. The ATC guy kept suggesting a few other options but the pilot dismissed them all. And he was right!
Yes he may have made it to LaGuardia IIRC, but there was hardly any room for errors.

Hard to believe it’s already been ten years. I remember seeing the news reports live- I’d just gone on terminal leave, so I was at home as it was unfolding.

A friend of mine from high school used to commute between her home in Manhattan and her work in Charlotte on that flight every week- she just missed that one because she was home sick.

Here’s the audio from that fateful day:

The Airbus involved is actually on exhibit at the museum attached to Charlotte-Douglas International Airport. I haven’t been there yet myself, but I seem to remember @BeachAV8R posting pics from there a little while back.

Air Traffic Controller testifying before Congress about the accident.

Not sure if it was in the Tom Hanks movie (I haven’t watched it, is it good?) but what is also thrilling about that case is:

People tried to solve the situation in a simulator, and IIRC only half of them made the landing on an airport, even though they knew what was going to happen, and when.
One of them even tried to return to LaGuardia but crashed.

So yeah, great respect for that crew.

In the film despite knowing the heading and turning pretty much straight after the bird strike, they still took about 17 attempts to land it and couldn’t land it at all when a more realistic reaction time of 35 seconds was introduced.

I don’t know how factual that part of the film was tbh - it makes out the investigators to be utterly clueless morons.

Enjoyable article by @BeachAV8R on this incident:

My beautiful wife with the two heroes. I was jealous. Not of them, but of her…I wanted to meet them. 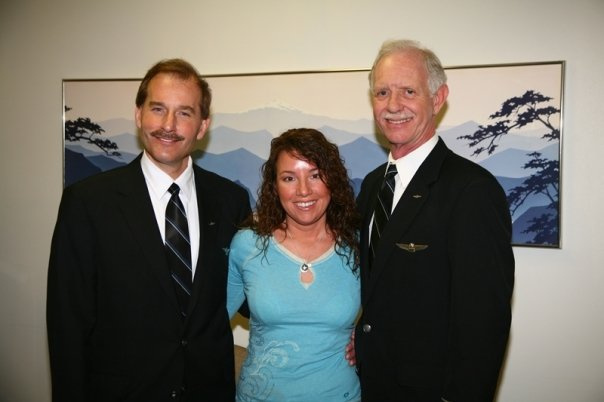 My God Beach, when are you going to show your pictures of your family with Neil Armstrong, John Glenn, the Wright Bros? You probably have a photo with Amelia Earhart too… j/k

ps I thought the movie was quite good. But like any movie, would have been better with Sean Connery in the lead.

I have another picture somewhere of an earlier girlfriend with Bob Hoover. He even told me what a great looking gal she was. I wonder if he pinched her butt while I was framing them…

So its a Friday afternoon back in 2004 in the N2 office onboard CVN-74 berthed at NAS North Island. My assistant, Don, mentions he has a friend who he is going to give a tour of the ship on Saturday and does he need to inform any of the ship’s company chain of command about it. I say, “No need”.

…then I get to thinking. Don is an avid space enthusiast. He goes to various talks and presentations and has photos of himself talking with astronauts such as Neil Armstrong…maybe I should ask who his friend is…

Me - “So Don, What’s your friend’s name?”
Don - “Walter Cunningham”
Me - “Ummm…the Apollo 7 Walter Cunningham?”
Don - “Yes, That’s him.”
Me - "Yeah…on second thought you might want to give the ship’s PAO that you will be bringing an Apollo astronaut on board for a tour.
Don - “OK, Thanks. I’ll do that.”

Don later told me that they had a nice tour.

Don later told me that they had a nice tour.

Cunningham:
”Nice boat. I was picked up by one…”