I wanted to see if anyone on here plays Cities Skylines. I loved SimCity 2000 and enjoyed SC4 but I have to admit the Skylines is a game I just have to open up regularly and work on.

I’ve had issues with letting outside trains on to intercity tracks, causing lots of congestion, so I make freight and passengers transfer to keep the traffic down.

The intersection of confusion and despair.

Post up your cities, discuss the game, post updates!
(wasn’t sure if this should go in screens shots or games lol)

I have it installed, but haven’t played in over a year. I should look at loading it back up- I loved the SimCity games before they got EA’d.

What mods are you running?

Only content ones, American fire trucks and ambulances, a few building updates. I’m always nervous to get lots of mods cause that’s a way I’ve killed several games lol

There was a paid expansion about a year ago and a free one a few months ago.

I LOVE city Skylines! Even working on a building that I have to texture still, if anyone has seen Shaun of the Dead, then it’s the Winchester that I’ve modelled. I figured limited occupancy and making it wildly attractive should put a nice crowd outside the front entrance

I have the game and both expansions.
Although I admit that I haven’t played much in the expansion because I realized that the city I built (160,000 people) is completely incompatible with the expansion, one of the reasons being that it relies heavily on solar power.

I do plan to start a new one though. The game is really fun.
I just hope they fixed the traffic. Cars just don’t use as many lanes as they should, forcing you to lots of workarounds. If they didn’t fix it: There is a mod I’d like to try that implements all that stuff, like bus lanes and proper traffic rules.

@TheAlmightySnark That’s something I haven’t explored yet but want to, the asset creation seems very interesting.

I’m probably going to start a new one soon as well, always exciting. 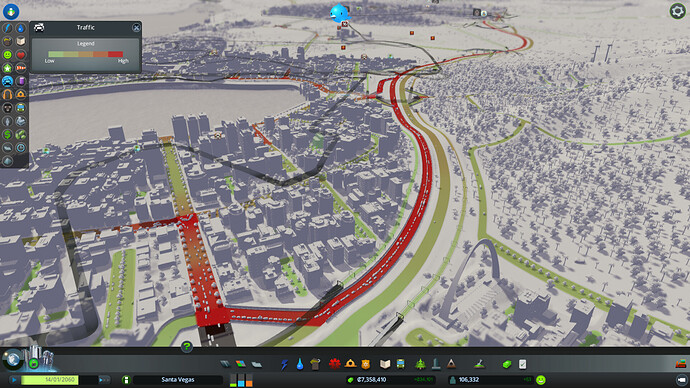 @Andrew116 Hey that second pic reminds me a lot of the Santa Monica coastline, with that little cliff. Cool screenshots. I’m going to have to look into this game. Haven’t played a good city sim since SimCity4 and been a little scared after the abortion that was SC5.

Never tried SC5, but I can say that Skylines is a great move into the future for city building games. I does lack a few things that Sim City had, you can’t micro manage to the same level to a certain extent, but it makes up for it with other things like a vibrant community of content makers… and curved roads lol

@Andrew116 replace that traffic lights with a round about, that should solve your highway problem.

Yeah, I have roundabouts built out of freeways everywhere. They don’t create traffic lights and are one way.
I’ll post some Screenshots soon.

Love the game but I suck at it.

This is my second largest one and it still bogs down…

I wouldn’t mind living in this neighborhood if it was real, nice view lol

It’s not a once size fits all solution. What you need to do is look at where the traffic is coming from and going to and see if you can create a bypass to relieve part of the traffic. You could do this by an elevated roadway, or an underpass or whatever. Consider alternative forms of transport if public transport is lacking. Or dedicated buslanes, perhaps.

Absolutely agree.
Bigger does not mean better, especially since the traffic is SO dumb. The problem is also the routing. If one way is ever so slightly shorter EVERYONE uses it, regardless of the traffic jam on it, and the completely empty streets running in the same direction.
Bypasses are great, I built some really crazy ones.

Right on! My years of playing OpenTTD has taught me never to trust the auto routing! Atleast the trains try and find the least congested route…

Fun fact: Some (in real life) really effective strategies don’t work at all.

German example, since in germany we are having lots of traffic and no space to build even more roads:
The Autobahn A5 and A67 between (roughly speaking) Mannheim and Darmstadt are basically one path. Most of the time I drive there it doesn’t matter which one I choose. Both are almost equally long, both can handle roughly the same number of vehicles at the same time. If everyone uses the same (which happens because of accidents sometimes) you get one huge traffic jam. If everyone chooses at random it usually works fine.

I learned the hard way this won’t work in Cities:Skylines because the A67 is slightly longer. It would stay empty.

I present… an experiment…

I’ll have to post an update when it gets some traffic on it, but I have high hopes for the lack of traffic lights lol

I have seen such things work for some players.

And I actually have built such things as well, although mine are usually below ground level. More expensive but I love tunnels.

The CS Subreddit has so many inspirational pictures, many people make their city a work of art!

Yeah, it makes me sad.
Because my cities are molochs. They are ugly and most of their streets are rectangular because I KNOW I have to build efficient or I won’t be able to reach the population I want.

…I wish the maps were bigger.

…also there are types of industry I want, but they die all the time because everybody is too educated and doesn’t want to work there.