A submarine expansion/stand-alone. ‘Give me a ping, Vasili. One ping only, please.’

CMANO topic here for those not familiar with it: CMANO Megathread 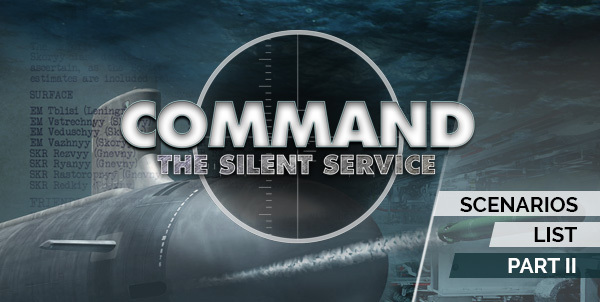 The Silent Service, the new standalone expansion for CMANO, is due for release on March 1st, using the new v1.14 game update. Following Part 1, we now conclude coverage of the scenarios of this new battleset. We use the default listing order (easiest to hardest) but players can also choose to try the scenarios in chronological order, or in any order of their preference.

The United States enjoyed technical superiority in terms of sonar, signal processing and submarine quieting for the majority of the Cold War. In the mid-1980s however, the Soviet Union made massive leaps in quieting their submarines, with the newest Victor-III class submarines being comparable in stealth to the United States Sturgeon class. These dramatic advances were in no small part the result of the Walker spy ring, and the Toshiba-Kongsberg affair.

The UN intervention in Korea is going poorly. The Korean People’s Army (KPA) has pushed UN forces back to a pocket extending approximately 60nm from the port of Busan. The remnants of the Republic of Korea (RoK) Army and the US 8th Army are currently preparing to mount a desperate defense of this perimeter along the Nakdong River.

The speed and momentum of the KPA assault has exceeded all pre-war calculations; intelligence suspects that the KPA is receiving material assistance from the Soviet Union and People’s Republic of China. While the bulk of the US 7th Fleet prepares to mount a counter-attack at Seoul, the USS Segundo is tasked with identifying Soviet shipping that may be assisting in the war effort.

After decades of being ‘one step behind’ in terms of operational freedom, in the spring of 1987 Admiral Chernavin initiated Operation Atrina, known afterwards in US naval intelligence circles as ‘The Great Soviet Sub Suckerpunch’ – and some of the finest Soviet submarines ever assembled surged out on the Atlantic.

The arrival of USS Preserver (ARS 8) in Tivat, Yugoslavia on the 8th of August 1978 marked the first time in history a United States Navy vessel had entered a Yugoslavian port for routine repairs, and was a significant step forward in US-Yugoslavia relations.

NFSP-01–the first convoy carrying military materiel from the United States to Yugoslavia under president Carter’s military aide programme–is approaching its destination port of Split and is due to arrive in 12 hours at 0900L. Meanwhile, the Soviet union has announced a ‘Naval Quarantine’ of the Adriatic and has publicly committed to preventing arms reaching Yugoslavia.

The USS Memphis, operating with the support of the USS John F Kennedy CVBG in the Mediterranean, is tasked with guiding NFSP-01 safely to its destination and avoiding a confrontation with the Soviet Union…

Following an incident at sea between a US destroyer and a Soviet spy ship, the world teeters on the brink of World War Three.

As the Soviet Red Banner North Fleet sorties from its bases in the Barents Sea, NATO submarines in the east Atlantic scramble to form a barrier and intercept the Red submarines before they can break out into the western Atlantic.

How many subs will slip through?

World War III has been raging for a full week, and as yet neither side has secured a firm advantage. The Soviet Union has made rapid gains in Europe, but the Red Army is suffering heavily from NATO air attack. On the Naval front, NATO has managed to contain the Red Banner North Fleet within the Norwegian Sea and yesterday conducted a massive carrier-borne air offensive against the Soviet Union with heavy losses on both sides. The Soviet Navy will now retaliate, starting with the carrier group’s supply train.

Yesterday NATO conducted a massive carrier-borne strike against Soviet facilities in the Kola Peninsula and occupied Norway, severely damaging several airfields and logistic centres. In retaliation, Soviet Naval Aviation executed a multi-regiment missile strike on the NATO carrier group, sinking the carriers USS John F Kennedy and USS Dwight D Eisenhower. The remaining carriers USS America and USS Forrestal are headed south to replenish their magazines, with the presumed intent to return to the Norwegian Sea to assist in the sea control campaign.

While the carrier strike group retreats to re-arm, the Red Banner Northern Fleet’s Submarine Division has one final surprise in store: an Oscar-class cruise missile submarine is assigned to eliminate the NATO group.

After nearly two weeks of fighting, NATO force in Europe are beginning to falter. The front line is slowly but surely slipping west of the Rhine, with heavy losses on both sides. The surprise counter-attack by the Soviets in the Norwegian Sea has put extra pressure on NATO Sea Lines of Communication between mainland Europe and the United States.

In order to bolster their flagging defences, NATO is relying on a number of convoys from the United States carrying troops and materiel. While the Greenland-Iceland-UK submarine barriers are containing the bulk of Soviet submarine activity, a small group of Soviet submarines has managed to get into position off the west coast of France…

The Third World War has raged for a week. Soviet ground forces have made massive gains in Europe, steam-rolling West Germany and pushing NATO back to the French border. Desperate fighting is taking place in Belgium and the Netherlands, while Norway is under attack in the north.

Due to the efforts of NATO anti-submarine forces, the Red Banner Northern Fleet submarine force has been largely contained within the eastern Atlantic where they are creating havoc with Allied shipping. Unbeknownst to the NATO alliance, an elderly November class attack submarine has managed to approach the US East Coast undetected, and has just received orders to make her presence felt…

The arrival of NATO reinforcements from the United States dramatically changed the situation in Europe, with the Soviet ground forces being pushed back beyond the East German border from their furthest points of advance in Eastern France and the Benelux. With neither side seeming likely to employ the use of nuclear weapons, peace negotiations are underway in Geneva.

Meanwhile in the Pacific theater, Vietnam and North Korea are under increasing pressure from the Soviet Union to open a second front to strengthen the bargaining position of the Warsaw Pact at the negotiating table. With the bulk of the Soviet Pacific fleet concentrated in the safety of the Okhotsk bastion, Naval Special Warfare Command in conjunction with the 7th Fleet has been tasked with sending a clear message to would-be adversaries in the Pacific.

I can’t wait! I like Cold Waters for its interface and ease of use but I keep coming back to Command for real, old school sub ops. I also just re-read ‘Red Storm Rising’ for the first time in 20 years so this is just what the doctor ordered.