Alright, first few flights are in! Let’s see what the experience was like.

Finding my way into the options to set up my controls. I pump the graphic preset and kick in some anti-aliasing and things like that. Even despite that the game is not on par with some of the products we are used to. I’m personally not bothered so much by that.

Some Blufor and Opfor aircraft keeps the background active. I found this MiG-21/J7 a bit weird. It looks untextured, and it seems to be carrying an AIM-120B and an AIM-9.I suppose this is all work in progress and placeholders! Setting up the controls was a breeze in my opinion. Click the function or axis you want to set up, move that axis or click the button and voila. A bit weird is that the save function is in the main controls menu, as seen on the screen shot. There is currently no warning if you attempt to exit without saved controls. So I had to set them up one more time.

Time to see if this baby can fly!

It looks like I have hidden acces to the sea harrier…

It turns out that the toebrakes where the issue… There are none. The brakes are on a toggle. So I was trying to take-off while braking. Let’s try that again.

Great succes! At this point I am starting to like the sim, and fast. I have an X-55 and set the left throttle for the actual throttle in the AV-8B. My right portion of the throttle actually controls the angle of the nozzles. This mimicks the real controls layout of the AV-8B harrier II. Since I couldn’t find a full manual or anything, I theorycrafted a bit and decided I would try to hold the brakes and throttle up with zero degrees angle on the nozzle. When the propulsion starts to overpower the brakes, I toggle them off and start my roll. A few seconds before sliding of the other end I set my nozzles to about 60-65 degrees in order to sustain my flight as I keep building up my speed and retract the gear. Then back to 0 degrees for full speed forward flight. I like it, it’s not been done in any modern combat flight sims (Don’t know about the harrier sims of the days of old or how it is handled in the civilian flight sims) I tried moving the nozzle around during forward flight and the effect it has on flight seems very well modeled. I like it. Unfortunatly a crash occured whenever I atempted to change the loadout or the loaded fuel quantity. So I was not capable of testing out proper VTOL or STOVL mechanics. I tried getting the Harrier into a hover. I was somewhat capable of doing this, but the Harrier could not properly sustain flight and eventually rolled over left while losing altitude, I was not able to recover. I expected this behaviour from a fully laden Harrier. So I count this as good.

Note that the cockpit is unfortunatly not fully interactable. Far from it in fact. Most of the cockpit interaction is centered around the MFD’s. You get some sort of popup whenever you mouse over certain cockpit elements like the UFC. But they do not appear to respons to input. Perhaps its not modelled, perhaps it’s still WIP. 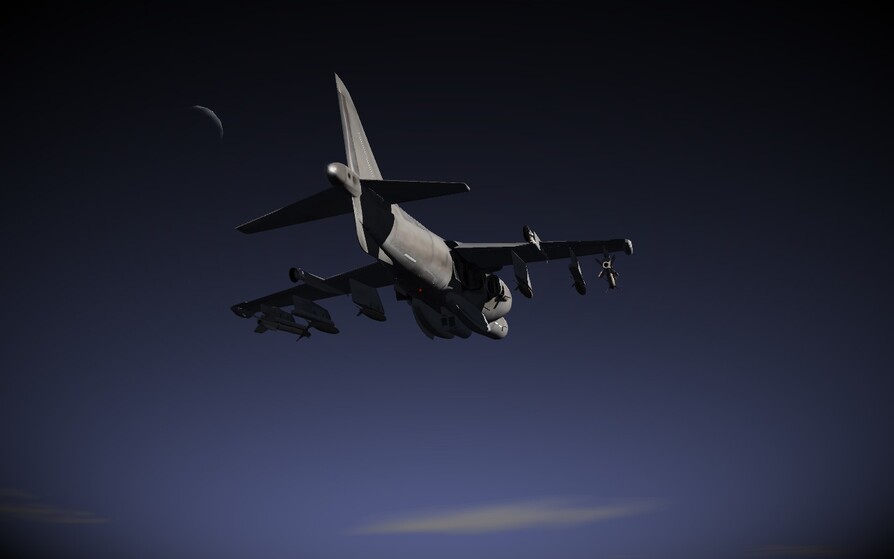 I took the aircraft for a few spins. The FM feels good to me. Perhaps not PFM level but sure good enough. I haven’t taken her to extreme flight regimes yet but the aircraft seems to respond believably to turns, AoA changes and stalling one wing before the other. It’s not on rails for sure. I’ll try to test it in more detail tomorrow. Hopefully I do not have to retract my statements. I also took her out for some shooting. The GAU-12 was employed against opposing grassleaves and hilltops. I didn’t see any impacts, I didn’t feel any recoil, the ammo consumption was way to low for a gattling gun. Maybe this is still WIP too?

Ofcourse I tried some carrier landings as well. Sure is different with no hook and instead use the nozzle to get to acceptable short stop speeds while sustaining flight.

This part seems to work great. I don’t know the ideal way to handle the AV-8B in a landing yet. But I managed to land her over 75% of the times. So far having had to do 1 go-around (my very first attempt) and only smacked into the rear of the carrier a handful of times. I only got struck by a bug once where the touchdown catapulted me a few hundred feet into the air.

There are training missions but unfortunatly they’re not that great. There’s some sort of checklist but there is no instruction or interaction. You just check things of the list as you deploy your gear, set up your flaps etcetera. There’s also things for setting up the nozzle angle correctly. However I think this works for people using the keyboard or other buttons to control the nozzle angle. It does not respond to my throttle axis commands even if I put her on 90.0 degrees perfectly. So I cannot complete the checklist. I do get a mission complete when I touch-down and make it into a full stop on the deck though.

I have tried the first combat training mission. However I am ordered to navigate to waypoint Charlie. I could not figure out how to change the waypoint yet. I want to try this again tomorrow.

You should get this now if you are a

Keep an eye on this title if

You should look out for something else if

Thanks for reading! Hopefully I can do another one tomorrow.

I too have flown about a bit, and am looking forward to the more graphics settings in tomorrow’s update release build on Steam. It looks like the Dev is going to be pretty active in early access.

But how’s the snow?

I’m thinking that Beach called in sick today, but now is finding himself majorly conflicted, being both a Harrier and switch fanatic.

He’s away from his PC, so torture time.

It is very much in the vein of Strike Fighters so perhaps right up his alley. He’ll be doing the main review, but as it is early access not this week.

Here’s some campaign shots, as there hasn’t been many of those online. The vector map is neat:

Lots to learn/fiddle with so far.

I’m thinking that Beach called in sick today, but now is finding himself majorly conflicted, being both a Harrier and switch fanatic.

I wish. I’m currently in Dallas at SimuFlite going through the annual “get thrown around the box-fest”…so I’m unable to really comment on CAP2. I did download it to my traveling laptop…but it doesn’t have the horsepower to run it really. So I’d rather wait until I’m home on my desktop before I breakout the pitchforks or the sugar…

I’ve added a few video clips from my first flight as well.

Plays.tv is the easiest way to share your great gameplay moments. Finally there's a fast, simple way to share them. And a community that will love you for it.

So far, I really like it- very moody, in an EF-2000 kind of way. Now if only we could get some more lights on the instrument panel, we’d be in business…

That’s a nice statement…and evokes lots of memories. I can’t wait to get home and try out CAP2.

Great videos… Thanks for making me sad that I’m not home so I can play this… Grrr…! Thanks for sharing!

Dang…just watched the “Flyby of the Battlegroup” one…that looks silky smooth and beautiful. That landscape is really rugged and lush. Hope they can populate it with interesting targets and missions…

Sorry for the necropost… What’s 3 years between friends?

How is this sim in 2019? Keep seeing it pop up on Steam (I did buy it years ago but refunded as there wasn’t much there and I couldn’t get my then current HOTAS to map anything) and wonder if it’s time to jump back in again?

I’m interested as well. Same thing. Keeps going up for sale on steam but I read the same reviews over and over again and don’t try it. But it does look cool

I asked @damson on Steam and he says it’s still quite barebones but there’s a mission editor now but I’ve only heard of ground units in there (SAMS etc). Think I might buy again tonight and have a look, still have the 2 hour refund window

Aww that is a shame. I hoped this was going to be a hidden gem. Thanks for taking the plunge @Mace. Good to know these things

It may be different for you, I know many have it and have no problems but I’ve tried it on 2 different HOTAS’ (HOTASI? HOTI? HOTASESESES?

) and does the same thing so not sure what’s going on but I had gone up to the 2 hour mark so couldn’t look into it further.

I had similar problem - one of my throttle axis was constantly overriding anything I tried to bind. So I went to Devices in Windows Control Panel and checked what throttle inputs were showing. As it turned out 3 of its axis were at their minimum inputs - and those were the ones that were not connected, optional from the rudder pedals (which I don’t have) which can be connected to the throttle.

And since the binding routine in the game seeks for deflection from centre not movement of of an axis one of those 3 axis were instantly binding to anything I tried to assign an input to.

Eventually I sorted the issue myself. IIRC I recalibrated the throttle in the control panel and those 3 axis were set to their “neutral” values.

But still when binding controls you need to have all you axis in the centre, including throttle and any additional rotary axis you have, which usuallly are set somwhere else as they are not self centered by a spring.

Thanks for the feedback. Yeah, I seemed to think it was one of the rotaries on the X56 throttle but as I had bought the game before and returned it Steam keeps your previous playtime so I only had a few minutes to check it over and no time to check anything in depth unfortunately. It did it with the T16000 HOTAS I had before too with no rotaries so not sure what was interrupting the inputs there.

It did it with the T16000 HOTAS I had before too with no rotaries so not sure what was interrupting the inputs there.

I have T16000 FCS HOTAS and it has a rotary on the side of the throttle. But as I said in case of T16000 FCS you need to have the slider on the joystck as well as the throttle and rotary axis centered (best checked the position in control panel) before trying to bind anything in CAP2. 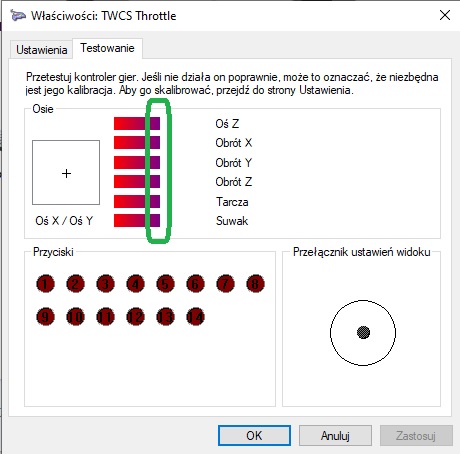 Ah yes it does, I’d forgotten that.
Hopefully this is helpful to anyone else that picks it up