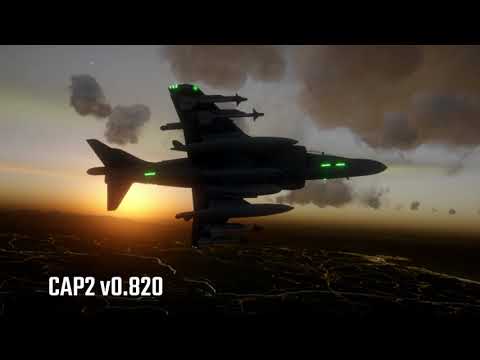 I was wondering about that sim but couldn’t remember it’s name. Wanted to see how it has improved if any. Great post.

The progress is really slow on this one, but considering there is basically one guy behind it it’s an achievement, getting all the advertised features (like dynamic campaign) may take some time though.

CAP 2? I have not from CAP 1 in ages. Hope this makes it big. I like the idea behind the game.

A mere 4 years later, .820 is about to release. That is probably competing for slowest development ever.

The progress is really slow on this one, but considering there is basically one guy behind it it’s an achievement, getting all the advertised features (like dynamic campaign) may take some time though.

Yup. In more ways than one, it’s like the second coming of strike fighters…if they (he) can get mod support up and running…

I bought into this quite early, and it’s actually quite fun to play - given what is there.
Soon as you start it up you’re thinking Strike Fighters. So it’s cool.
For a one man show I’m impressed.

Got to appreciate his tenacity

Sorry to necro this thread, but whatever happened to CAP2? Youtube algorithm served up an old video and it looks great even today. Is there any prospect of further progress?

I haven’t heard anything…

I think from my last research on their steam forum and also last updates, its sadly fully dead. Its a shame, because was one of the best promises as a modern visuals simcade of a modern combat aircraft.

Its been so long without an update that now DCS not only has a harrier and a Nevada map, it’s got Persian Gulf and the Falklands as well!

I’m kinda sad that this never really got its campaign system finished, the game is flyable enough that you could have some fun if the campaign worked…

Its a shame, maybe Jason can pick it up and finish it

Steam really needs to give users a way to flag a title as abandonware. The devs are no longer marketing in good faith in calling this ‘early access’, which implies an intent to finish it. If active development has ceased, the store pages content is basically false advertising.

At the moment the best we’ve got is to give it a negative review and add in the review that the software is abandonware. I believe you can withdraw or change the review if the dev picks it up again, but that seems unlikely in this case.

At least if enough of us do this, it’ll show up near the “add to cart” button…

I enjoyed CAP 2 for a while until the last patch “broke” it for me. For some reason, the sim became problematic after the last patch. I ended up deleting it. Tis a shame, because it had so much potential.

I wished the project well and purchased it, but thought the mountain too high to climb with the DCS AV-8B as competition.