Since a lot of people seem to have problems with the controls I made this video showing my control setup and demonstrating that it handles nicely if you treat it right.

Feel free to share your setup and experiences with the Gazelle I made a video where I look at trimming for hover and forward flight. 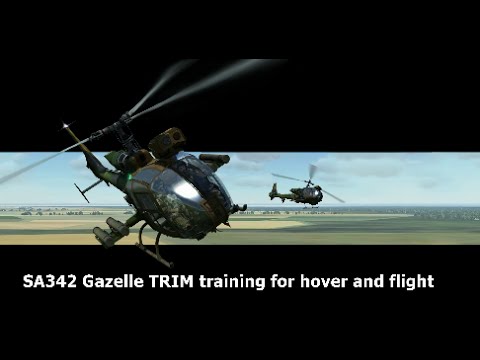 Posted it before in the first moments in the gazelle thread but it got kinda burried.

Excellent video Derby! This a bit of practice I find the Gazelle to be a nice ride. Very fun. As I remarked to @near_blind, I find that the Gazelle reminds me of how I first felt when flying the UH-1 - it was a handful at first but after you get used to how it behaves it becomes a more tame beast. The Gazelle is similar.

Thanks for that Derby and Sryan.

Crashed and burned with my first flight in the Gazelle and been meaning to ask for some help with curves … I use a TM Warthog HOTAS too along with Saitek Combat rudder pedals, my TM Warthog stick has one of those sort of mid length (about 100mm) extensions that I use in a combination of different types of simulations that I’m trying to keep universal, pretty much used to the extra stick throw now in most sims and just wonder if that would be a bad or good thing with something as natively nervous control wise as the Gazelle? Its quite easy to remove and revert to stock TM Warthog stick though if need be.

Going to give your settings a try very soon though and see how I get on.

What sort of pedals are you guys using, also any special tweaks for them physically and in the sim settings? I’ve done the centre notch removal on my Saitek Combat pedals and feel that’s a valuable mod for helicopter flying especially.

I would recommend you keep the extension. It should help quite a bit with controls. Maybe try a lighter curve with the extension. As for my rudder pedals (Saitek Pro Flight Rudder Pedals) I only have the centering force on the lightest setting, no modifications.

Thanks Derby, going to try this quite soon.

I recommend you do not look much at curves but instead at desaturating the controls. It’s what “did” it for me to get the controls under control

This means you lose out on maximum controls deflection ( you wouldn’t want to try that anyway) and gains you more accuracy. I don’t like curves. They cause acceleration in the controls wich I dislike.

Thanks Sryan, that makes a lot of sense too, going to dedicate a whole afternoon to DCS choppers soon with lessons learned, have them all now and must admit its been embarrassing here to ask for help as I consider myself a seasoned flight sim vet, but this stuff is quite hardcore:) Was OK with the Huey after some practise though but was not flying it in what I would call a realistic manner of any shape or form.

I’ve only got about an hour in the Gazelle, but have thought a lot about Derbysieger and Bunyup’s ideas on configuring flight controls. My hardware setup is a slightly massaged (internals smoothed and greased) TM Warthog, no extension, and Saitek Pro Combat pedals.

Having consumed said videos and as I do in the Huey, I was determined to fly the Gazelle with the aforementioned default axis tuning. While I can take off, hover, fly around, and land with the defaults, the amount of movement used with the Warthog stick is basically equivalent to the center play that one has in the stick. In other words, it almost imperceptible visually. No crashes yet, but definitely a few oh sh1te moments.

I remember reading in one of the Vietnam era Huey books, probably Guts and Gunships, that when transitioning to the underpowered gunship from slicks, the trick to taxiing and moving to TL was to use almost imperceptible movements of the cyclic. That’s all well and good. But a pilot with a full length cyclic would be able to more finely control than with what the TM has. It also requires enough attention that my SA is basically 100% focused on flying the aircraft smoothly and as soon as my attention moves to something else, like an instrument scan, I venture near an unusual attitude.

Now lower the saturation and throw in some curve, say 60/13 for pitch and bank, and things become much more manageable, without limiting the aircraft’s performance. Still working on yaw, but I’m thinking a very small curve without lowering saturation will be in the ballpark.

So. what I’m wondering is if the designers created the default controller sensitivities with full sized controls in mind? If so, that would make a lot of sense.

If there are pilots who like flying it with a short stick and hyper sensitive tuning, then rock on! I’m more in line with Sryan’s settings.