Take the Call of Duty series as an interesting example. Many have associated its’ success with popular interest in military style weapons/tactical gear (in the US and abroad) as well as mil-sim airsoft type games. (Let’s keep politics out of this).

With the rise of MSFS and what seems to be an ever-expanding (if not exponential) player base for DCS, could in-depth aviation enthusiasm grow in the same way? Will air shows once again be widespread? Could the economy of scale decrease the cost of enthusiast aviation?

Perhaps it’s too niche, but it does feel as though the winds are changing. New aviation podcasts pop up regularly, and it seems daily that new sub-niche groups are forming.

One can hope, perhaps.

Considering the success of previous MSFS versions and now this latest slugger, I think it will definitely help spreading the word about aviation.
Especially since it’s also available on console.

DCS has grown a lot in recent years. Not only in scope but more importantly also in player numbers.

I remember when I started almost 10 years ago (damn, time flies!) I was part of a small group of about 5 people who flew DCS: A-10C missions on a semi regular basis. There weren’t really any well populated public servers and when we wanted to fly someone hosted the mission and we flew together for a couple of hours (usually until the host’s DCS crashed

Then DCS World came along and things started to change a little. I was a regular on the Virtual Aerobatics server, got formation flying lessons from one of the guys on their TeamSpeak, regularly flew the airraces on their server, practiced aerial refueling etc.

The little group I was part of started to kick of a little more with the release of the Huey but there still wasn’t a dedicated server .exe for DCS and we weren’t big enough to host and maintain our own server - so missions were still hosted locally when we wanted to fly together. Operation Bactria, Operation Vetka, Operation Pilot Search, Huey Drop - we flew them all and we also built our own missions.

But it was still only a handful of people. 2015 we founded the ‘Serious Uglies’ with the goal to have a group that is open to anyone who wants to learn real life procedures together but without losing out on the silliness that we like to engage in from time to time.
However, DCS was still too small and often too buggy to keep people interested outside of some few dedicated individuals. But we did grow - slowly.

Then the biggest change was the release of the Hornet. Suddenly there was a lot more interest and a lot more people turned up on our Discord to fly with us. It was so much that we had to stop being open to anyone who wanted to learn flying jets and helicopters in DCS with us.

Compare this to today: We have large public servers that see good player numbers like the hoggit severs, blue flag, Storm of War etc and in our little squadron we have three dedicated servers, our bigger organised missions see 10-20 people, training usually 5-10 people atm but it’s summer and people are on holiday, it’s too hot to turn on the PC etc.

When we do stuff like training with a controlled airfield (thanks to our RL pilots and our RL air traffic controller!) or train CASE I or CASE III we often get 10-15 people as well, even during the summer months. And everyone turns up when we do large formation flights xD

This was the big formation for our 5 year anniversary last year, appropriately led by a trusty A-10C, the plane that started it all: 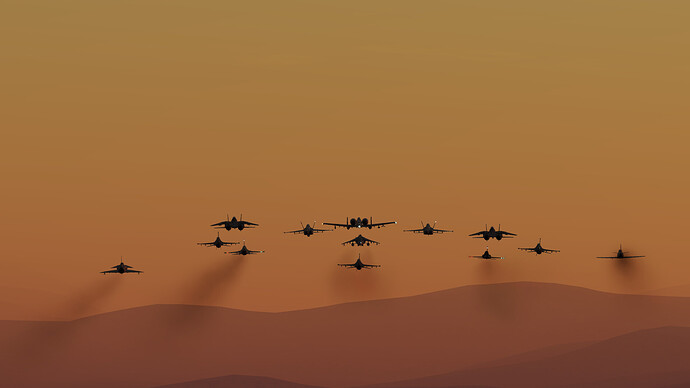 I hate to be naysayer, but the flight simulation community across all of it’s various products is an order of magnitude below COD, FIFA, etc.

COD averages 20 million or so units per release. MSFS is probably the most widespread FS title in history has managed just over a million, and that is after a decade long absences of a new MS flight sim, adding cross platform compatability, etc. COD usually sells over a mil both in preorders, and again in first week sales. COD has been selling 15-20 million units every release since 2007 (and that’s almost every year).

Arcade titles like Ace Combat sell in the 1-1.5 (occasionally 2 million) range per release. These are far larger numbers than “simulation” titles sell.

With all that said, I think it’s an excellent time to be a flight simmer.

A friend recently texted a question out of the blue as to what is the best flight simulator “for his son”. I told him MSFS, but later lamented that they probably don’t have the hardware to run it.

Then I remembered because our kids get together in Roblox that they do have an XBox. Hardware problem solved. As much as I worry about Microsoft focusing development resources on XBox, it’s probably a brilliant play, and perhaps a gateway drug for future simmers.

Get-em hooked while their young!

Amen. My dad’s buying Comanche Gold, Comanche 3/4, and Flight Unlimited when I was a kid literally altered the path of my life.

Sales and attention will probably not rival CoD and the likes. But I still think a title like MSFS will help raise the public interest for aviation, which seems to be at an all time low.

MSFS was the most sold title the day it was released on Steam, so there is widespread interest for the title. The question how widespread…

Back in the old days MSFS was the biggest title in PC entertainment. There are reasons for this that are unique to the limitations of PCs back then. I guess it was a draw. I flew Flight Simulator on my Atari for hundreds of hours before taking my 1st lesson at 16. But I think the real draw to MSFS is not for pilot wannabees. It’s for people who want a pleasant, realistic and beautiful experience that can be enjoyed in short or long investments in time. I am considering a new Xbox to play MSFS. I’m not looking for a new sim. But I do like the idea of a more enjoyable version of Google Earth where I can pass some time in the comfort and openness of my living room.

In another thread I tried to explain how this seems to be happening from the other direction. In Oshkosh non-pilots and pilots alike were able to sit in actual airshow and airshow planes, along with planes and helicopters for sale, and fly these machines in VR, often with the owner at their side confirming that this is exactly how she flies. Real aviation is about to leapfrog the sim community at its own game.

appropriately led by a trusty A-10C, the plane that started it all:

That said, it’s also worth noting that MSFS lead to a run on flight sim hardware, a further sign of interest.

What we need now is for the visuals of DCS (which save for the occasional janky early 2000s hold over for a vehicle model) continues to be one of the prettiest looking games on PC, to have a baby with the approchable-but-grounded nature of Strike FIghters (and give it the dynamic campaign from SF too). SF isn’t a capital S sim like DCS is, but it’s not Ace combat either. Then hire some ex google employees to build a fresh AI system for it. Maybe the guys from Turn10 that made that community informed AI model for cars in Forza can pitch in too.

That will at least score with the ‘dad’ crowd of gamers. Folks like me that in in their mid 30s/40s and grew up with games, and now want to settle into something more mature but without the brutal, unforgiving time-suck DCS can require to get proficient in something. With the right polish and balanced attention (eg. sacrifice a bit of the button-for-button accuracy in the name of better AI), you’d have the "dad novel’ of flight sims ready to go for a waiting audience of middle-aged suburbanites that want the escapism of what life could have been like if it wasn’t for needing those damn glasses…

I have hope that Microprose 2.0 sees this opening in the market. They have a drool worthy cadre of titles in the oven already, and it seems clear they aren’t chasing free-to-paly-massively-open-battle-ground-flavor-of-the-week-me-too titles.

Well we did have some people from Black Shark days but they weren’t regulars and only joined us every now and then. So for us it was the A-10C that started it.