COWS cooped up for the winter are being fitted with virtual reality goggles — so they think they are outside in a summer field. And the bamboozled bovines appear to be happier and producing more mi… 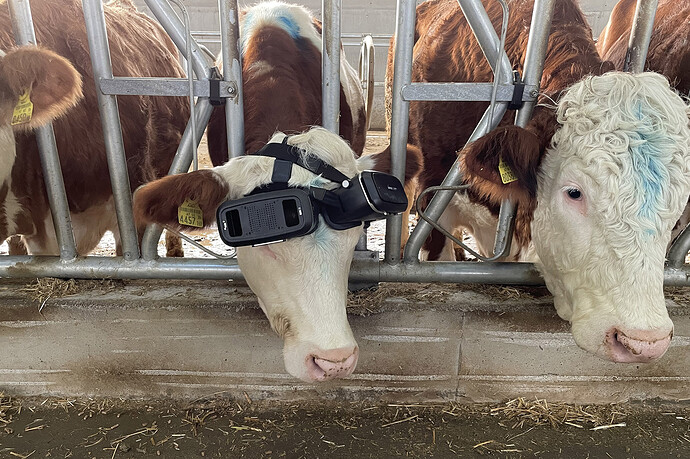 Having spent almost 8 years working as a data scientist in the ag tech sector, what that headline really reads to me is: “Hey, we found another way to increase milk yield and we’ll greenwash it a bit by telling people it makes cows happier.”

We’ve altered the genetics of some cows to the point where they are dependent on concentrate or their udders will deprave them of so much energy that they will starve to death.

The average lifespan of dairy cattle is between one half and one third of what it used to be 70 years ago. The reason for that is that the cows simply start turning infertile after about 4 lactations due to the stress that producing 9 gallons of milk per day puts on their bodies, then immediately get sold off to the butcher. But yay, more milk.

Jesus that is crazy @sobek I never knew it was that bad.

I worked for a short while in a poultry factory and its a similar grim tale in there as well. Gruesome stuff

Feel free to remove if this is off-topic, but I can imagine @sobek’s comment might make people feel uncomfortable. If you’re curious about alternatives, this site is a helpful starting place.

Honest question @Freak, why would it need removing if it makes people uncomfortable? Does discussing the horror not make people more aware of it and help them find alternatives like the interesting link you posted?

Not in any way intended to start an arguement, just curious as to the reasons

I 100% agree with you @Victork2, but at the same time, I am painfully aware of how easy it is to be annoying, as a vegan, talking about veganism.
I can imagine people not wanting to be confronted with a militant vegan on a flight sim forum.
Hence my cautious introduction.

To be clear, I meant “to remove my comment”, not sobek’s

To be clear, I meant “to remove my comment”, not sobek’s

Apologies I misread that

I am painfully aware of how easy it is to be annoying, as a vegan, talking about veganism.

I understand what you mean mate. I personally don’t believe in Veganism as a true solution (not to say it is wrong at all, just not a solution for everyone) but that doesn’t mean you can’t discuss it for fear of annoying anyone.

Like I say, I eat meat. That isn’t going to change unless something radical becomes the new normal, something like Vat grown meat that isn’t cut directly from animals. But I really struggle with the treatment of the animals during the “growth phase” its abhorrent to me. But I don’t think there is a solution at the moment that can work worldwide and change things.

You make some really good points, I agree completely. Are you interested in continuing this in DM’s?

Yes of course, but I’m not exactly an expert on the subject.

But I don’t think there is a solution at the moment that can work worldwide and change things.

I think that education would be a good start. Society is so out of touch with how food is produced that it sometimes borders on comical.

Did any of you know that when a cow is dried off, it is common practice to simply just stop milking them cold turkey? Since they are still at a point where they produce several gallons of milk a day, farmers actually preemptively give them antibiotics so the resulting mastitis doesn’t outright kill them. After a few days, the mammary glands stop producing milk and the cow is dried off. This procedure is, well, not particularly pleasant for the animal, but it is economically superior to drying the cow off slowly. And even though that could be considered animal cruelty and ethically questionable use of antibiotics, it’s perfectly legal just about everywhere.

Well, I think that’s just about enough OT for a day.

Who moo cows could be so controversial?