Getting ready to build a new computer and I had planned on going traditional air cooled for everything. However Im wondering if and AIO cpu cooler would be worth it instead of a fan cooler?

Any thoughts? It will be cooling an I7-9700K without overclocking.

If you’re not overclocking, regular aircooled will be plenty.
But, liquid coolers have the advantage of (usually) larger low rpm fans, which means less noise.
I have full liquid cooling on a 2x120 radiator. The circuit cools both the CPU and the GPU. With a delidded i7 8700K running @ 5GHz I get temps around 60-70°C on full load.

Cool, Ill stick with air cooling for now, knowing I can upgrade to liquid in the future if I need or want to.

Call me old fashioned but Im still leary about liquid inside a electronic computer case. I’m sure they are safe but since I dont plan on overclocking anything I feel air cooling will be the best for me.

leary about liquid inside a electronic computer case

Corsair’s AIOs use non-conductive coolant, so that’s safe incase of a leak. Still the mess though. I’ve had one of 3 I’ve owned fail (on my brother’s PC) and it was well past expected lifespan of even the fans. Pump died late last year, and CPU would thermal throttle. My old build’s cooler is even older and still running with the friend I sold it to. Both of those systems were gen2 Intel Core, to give an idea of age.

I went from water cooling to a Noctua air cooler and have been really happy with it. If you’ve got room in your case it’s worth the money. Might be overkill for a stock settings, but it will be cool and very quiet.

There have been plenty of tests run on the youtube tech channels, but TL:DR is Air coolers will perform better than the AIO stuff. The Noctua is basically king kong of the air units, will serve you well.

The only two areas that the water coolers win is in aesthetics and small form factor builds. They look really cool and can fit in smaller cases. Are you running that with a single fan or did you upgrade to the second fan?

I use the fan that came with it in the center, and then one I had with a previous cooler on the outside, towards the case exit (it comes with a clip for any 140mm). I’m not sure it even needs two, as the heatsink is about the size of a car and I think does most of the work. Do make sure you’ve got room for it, as that’s the only downside. The product specs have the sizes.

I’ve looked at builds that have it and the motherboard im looking at and all was good.

It sure does look huge, but its under a $100USD and works better than some liquid coolers Im game for it.

From what I remember, Noctua have a very good checklist page to guarantee that it will fit here - Noctua so worth a double check.

I have the Noctua NH-D15S dual tower, and love it. They do a much smaller NH-U14S but if you have room for the 15 do that.

It seems a bit funny, to me, that when comparing ”air” vs. ”liquid” coolers, most of the time liquid is compared to liquid…
To me, an air cooler is a fan blowing air over a cooling rib.
Several of the high end CPU coolers are basically a small closed loop of cooling media running through a radiator, with a cooling fan.
So, air is always doing the cooling. The only difference is the transportation of the heat and where the cooling occurs.

Water coolers have pumps that can fail. Moving liquid is harder than air, even though it transfers more heat per volume. The h60/h90s etc were good as out of the box closed loop coolers, it’s just the air cooler designs got good/cheap enough not to make them worth it. For a custom water loop it means a nice high-end overclock, which for 95% of people is overkill.

When my h60 and h110 died (both dead pumps) then the PC thermal shut down and the coolers had to be thrown out, while on an air cooler it probably just means getting a replacement cheap fan.

Yeah… Maybe my point didn’t make it all the way:
It’s always air that does the cooling.
Blowing air across radiators cools metal, liquid or gasses.
Even the heatpipe coolers have a liquid that evaporates into gas, that is cooled by air.

So, simply saying that these are both “aircoolers” is somewhat misleading, if you know what I mean… 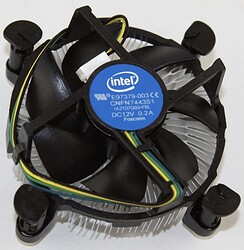 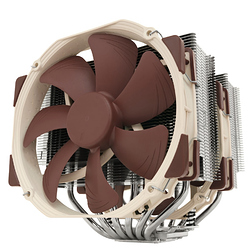 Where as in a air cooled unit the air flow cools the the heat sink over the cpu.

Yes, so the liquid is simply a transportation.
But then there is the heatpipe coolers, with a liquid that evaporates, which is an energy consuming transformation, and rises in the heatpipe, gets cooled by the metal in the radiator, that in turn is cooled by air…

It’s not fair to call the heatsink/fan cooler and the heatpipe cooler, in the pics in my post above, simply “aircoolers”. They are rather different beasts.

Just thinking out loud here, what if CPU’s were purpose built for liquid cooling, made a few inches tall and allowed water direct contact with the walls of the processing unit. Similar to how water runs through an engine block and cylinder heads.

Im no engineer, but as I see it, heat is transferred from the chip to a paste or solder, and then to the IHS (the part you take off in delidding), and then to more thermal compound and what ever is bolted on top of the IHS (air or water block cooler). Imagine a CPU where the water is allowed direct contact with the IHS. I wonder if that would be more effective.

Why hasn’t someone made an IHS that is connected to water lines? Would add an extra install step (de-lid the processor, use new water IHS), but if you are really that worried about a few degrees difference in AIO cooling vs traditional air cooling, you would probably be ok with this.

That’s one way of looking at it.

I see the liquid as a transportation medium for the heat, to the heatsink, which is called ’radiator’ in a liquid setup.

Philosophy can be used for more or less anything, but it doesn’t help repair broken pumps.