This is… weird. And kinda funny.
Apply a grain of salt though. 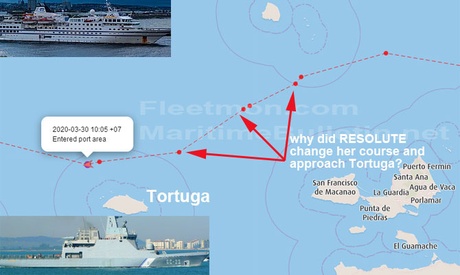 Cruise ship sunk Venezuelan Navy ship after being fired at and rammed. Don’t...

Apr 2 UPDATE: Cruise ship with 35 maintenance crew on board (no passangers) was positioned outside Venezuelan territorial waters, when she was ...

I also wondered if it was a joke, but the news also appeared in other sources both earlier than April 1st and later.
It could actually be true.

Edit: I did some digging and it seems that today (April 3rd) there are official statements about the incident with from the German company that operates the “Resolute” and the Venezuelan navy. I haven’t dug deeper but unless it is a really well orchestrated prank that is also not cleared up a day later… this seems pretty real.

Is on mainstream as well https://www.bbc.co.uk/news/world-latin-america-52151951

Well, in 2018 the Norwegian Navy Frigate, KNM Helge Ingstad, sank after a collision with a civilian tanker… It happens.

A similar thing happened to the Indian navy ship “Vindhyagiri” which collided with the merchant vessel “Nordlake” in 2011.

The difference is: this Venezuelan incident seems to be on purpose. The Venezuelan navy claims that the cruise ship rammed the warship, while the operator says that it was the other way round.

Yeah, like the time I was standing, minding my own business, in the middle of a set of a railroad tracks and the train comes along and RAMS me! Didn’t make one attempt at evasion, it easily could have gone around.

Apr 1 UPDATE: I’ve been correct in my assumption, that the decision to flee was justified, or so it seems, judging from updates published by local sources. According to Curacao media and their information, ANBV NAIGUATA did attempt to seize cruise ship and take her to Margarita Island, east of Tortuga, under a dubious pretext of “violation of Venezuela territorial waters”. Ships navigating in these waters enjoy the right of free passage, so it looks like an attempt to hijack cruise ship. That explains this strange leg in ship’s track and unexplainable Tortuga approach.

“Ships navigating in these waters enjoy the right of free passage” - again, that doesn’t really apply. On the other hand, warships may transit territorial waters in certain circumstances under “the right of innocent passage”. - again not a civilian ship thing:

Finally, it sounds like what the naval ship was attempting to do is something called “shouldering” - you approach in the same general heading and then move in at a shallow angle until contact. If done correctly the damage is minimal. (the Soviets used to do it with us during the Cold War…oh, what happy halcyon days those were… think there is YT video)

Now when I saw done. correctly, part of that “correctly” means that you don’t try to shoulder a big cruise ship with a small patrol ship…in that situation, the “law of gross tonnage” applies and trumps all else.

I read somewhere that the cruise ship supposedly was outside of the 12 mile zone.
I would kinda understand their decision to just go away after they were attacked by the warship and that failed.
They report that the war ship was trying to make them turn into the direction of Venezuelan waters with no space to turn around. If the warship had succeeded doing that they would probably have had to follow them.

Anyway, this is just assembled from the different things (all second hand info) that I could obtain.

Conspiracy theories of the day I heard:

I read somewhere that the cruise ship supposedly was outside of the 12 mile zone.

Well, there is this from the article - the yellow is my annotations:

It is a pretty rough chart; it’s accuracy is suspect. However, if that is also the cruise ship’s track, then twice it entered Venezuela’s TTW (which is how you abbreviate “territorial waters”…why? I don’t know). I would have to dive into UNCLOS to see if and what provisions are made for “hot pursuit” - i.e. if the cruise ship was ordered to heave to while inside Venezuelan TTW, did not comply, and subsequently departed Venezuelan TTW.

Shouldering was not the right thing to do…obviously. The correct way to handle this was, after verbal warnings (Channel 16)put a shot across the bow from your main battery. If they then fail to comply the choices are shots into the bridge or engineering spaces. I prefer the engineering spaces - less bloody and nothing says “stop” like wrecking the engines.

In the US Navy we would use a couple of specific, highly technical terms to describe this situation, namely “Soup Sandwich” and “Cluster F__k”…although I can imagine “Frigg’n Goat F__K” would also be apropos.

Yeah no clue what exactly happened (and I am not am expert on ships or the things they do).

A similar incident happened long ago between the HMS Queen Mary and the HMS Curacoa.

A little-known fact about the mighty luxury vessel the “Queen Mary” is that she was involved in an horrendous accident in WW II which claimed nearly 330 lives. For reasons