Darkest Hour - Why did someone put me in charge again?

I’ve decided to go play Darkest Hour. I am terrible at 4X games, but hey! Failure is fun too!

So for those not in the know and for me, let’s start asking ourselves first “What is Darkest Hour”. Something something Hearts of Iron 2 mods:

Right. So with that out of the way let’s get to the gameplan!

That’s the map, and I want to control all of it.

Will I succeed? Absolutely not, but perhaps for a few days we can pretend I am succeeding at getting through this game. My HoI3 experience pretty much is messing about a bit with small countries trying to bring them victory(Cuba really isn’t that much of a starting base in singleplayer as it turns out).

After that I’ve also messed around a bit in multiplayer with a ground friend and our South American conquest triggered WWII 5 years early.

So yeah, i have a spotty trackrecord with Paradox games. But this time it’ll be different!

I’m first reading a some bits and bops from the manual before I launch and dive in, so I’m happy to take any advice that I can ignore!

A few things I’ve learned so far without launching the game:

Darkest Hour allows you to play on the good ol’ world map, or focus on Europe in a 1914 and 1936 scenario. I will go with the latter for the full “Darkest Hour” experience.

IC is Industrial Capacity and determines how fast you can produce ‘stuff’.

It’s based on how many factories you have and how many resources, resources are 4 total:
Energy, Oil, Metal and Rare Metals.

All the trapfalls you expect in a 4x game are there, getting your fighty men somewhere requires transport over water. Ships require harbours, airfields for the flying things. And roads help you speed things up. A smaller better trained unit beats a bigger untrained conscripted non-elite unit. I think we’ve all seen these kind of modifiers/multipliers in a whole host of games(including any Paradox game

I will be starting in 1914, eve of the great war and play for 28 years, until 1942. Once I have selected a nation I will make up some pretend victory condition for the purpose of this AAR and to weave a story of intrigue around that goal.

I may have watched the tutorials to at least give me a fighting chance of playing this game. Didn’t learn much from it, except that sometimes the interface acts a tad weird.

So without further ado: 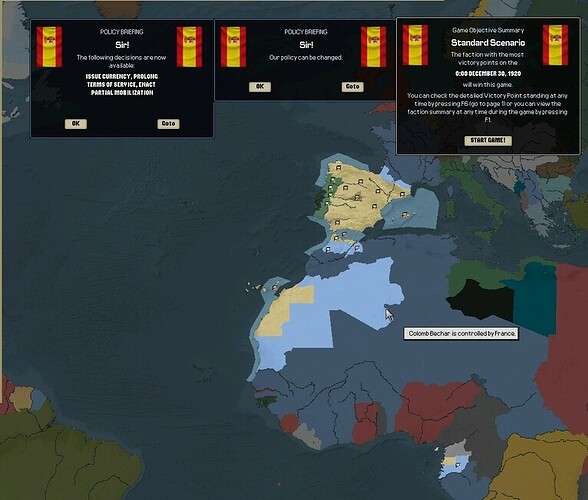 It’s really important to see it like Tim Curry does with the word “Space” in Red Alert 3: So now that we’ve got that out of the way we can start on building a empire!
Well, take control of a former empire. Perhaps we shall make it so that it relives it’s former glory under my benevolent steward ship. It will mostly likely crash and burn though.

I will try and aim for the standard end goal, I’ve started in 1914 and from what I can see I need 45 territory’s including some key territories under my control. Although tradition dictates me to find my own goals and in this case I’ve decided upon the following.

With the forbearing knowledge of history books I will try and avoid both WWI and WWII, Spain will become a powerful and peaceful(I’ve been playing Stellaris, I will NOT make the same mistakes again) nation striving to better the world. Anyone that stands between me and peace will feel the hammer of SPAAINNNN coming on them in a very non-sovjet way.

But first, I’ve got boxes to read and decisions to make. Hopefully I can last through the Great War period, time will tell!

So, on the eve of the great war I’ve opted to put some research into naval and avian warfare given that I look woefully unprepared compared to Britain and France… They keep paradeing their fleets up and down the Iberian peninsular coast! 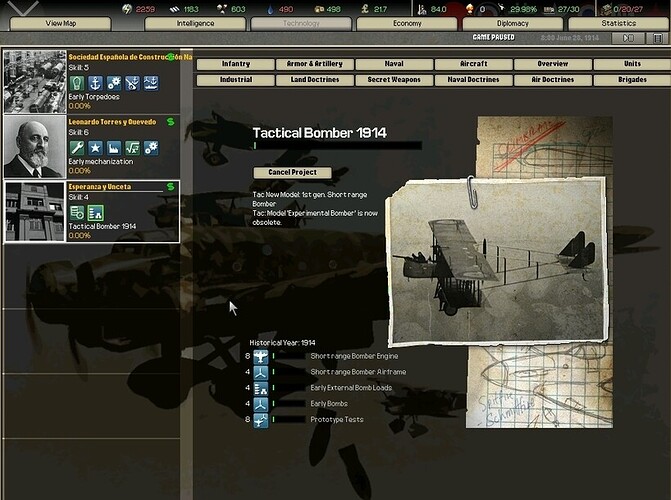 Currently I am building some BB ships, whatever that means. I am sure it has some meaning to the water oriented people in my government. What can I say, I was elected to lead, not to bother myself with flotilla stuff! 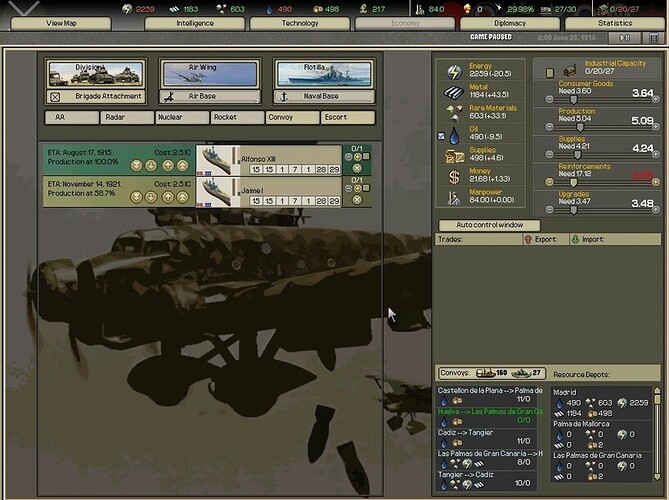 Interestingly enough the trade deals come flowing in, I think there’s some automated trading system going on that I have no idea about.

So far not many interesting things have happened during the first play session. Time will tell if this will go anywhere in anyway!