This is an interesting story in these crazy times… Hey @Troll - you can get through your 75 or whatever hour per month guarantee in just a few round trips! 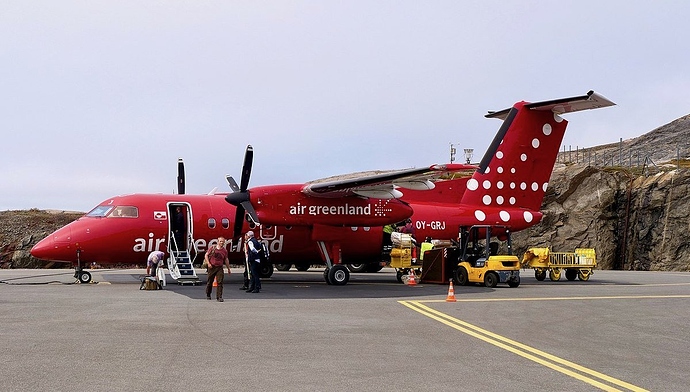 Air Greenland has an eight hour flight using their turboprop between Nuuk and Copenhagen. Here are the details of this interesting flight. 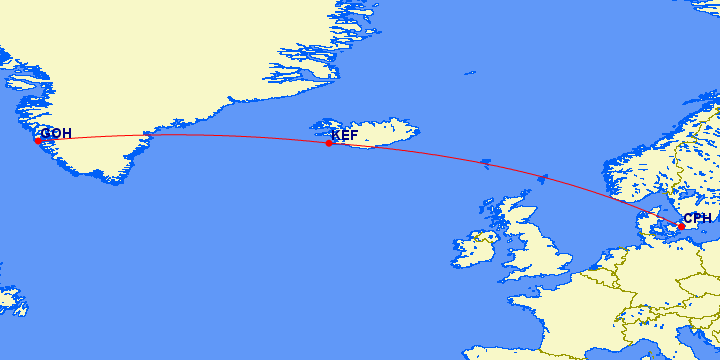 !
They can do that without ETOPS approval?

Yeah that’s a loooong flight for a prop plane.

I’m going to throw the “Not Entirely Correct” flag on that report. While I am sure the part about them flying that rout with Dash 8s is correct, the report implies that this is a new thing.

It is not. Air Greenland has previously flown that route with Dash-8s.

A few years ago, I was working up a simNovel that was to be set in Greenland.

As I do with this work, I did a lot of research into Greenland in general, and into aviation in general in specific. I needed to know how Air Greenland operated both in and out of the country. I came across a bit of info concerning how they were using Dash-8s for the run from Nuuk to Copenhagen. This actually makes sense in non-pandemic times.

Nuuk is the capital of Greenland and according to Wikipedia, the center of its economy and culture. So the must destination, if one is going to Greenland. However, its airport (BGGH) is fairly small and tacked in to a peninsula near town; runway length is 950 meters. I am fairly sure that is too short for commercial A330 use. However, just up the coast is Kangerlussuaq Airport. Only 317 km away and a former air base with a 2810 m runway. That’s where the A330s used to fly into / out of.

With the financial vagaries of the airline industry, evidently there was a time when A330s made sense and when Dash 8s made sense.…and now it makes sense too.

Air Greenland usually fly their 330 CPH-SFJ (Søndre Strømfjord/Kangerlussuaq) and then the DHC8 locally around Greenland.

I’m just surprised they are allowed to do it since the DHC8-2 single engine 1hr range is 197NM.
But looking at google earth, it looks like they can make that last trek from Iceland with a few miles to spare.

While I am sure the part about them flying that rout with Dash 8s is correct, the report implies that this is a new thing.

Yeah, I think the implication was that the Dash 8 route to Copenhagen is not the normal operation. As you said, normally they run the Dash 8 to the international airport (Kangerlussuaq) and run a larger aircraft to Copenhagen…so they were just adapting to the reality that they couldn’t justify operating the A330 with so few seats filled.

Nuuk is a pretty cool field. I wrote about it a few issues back…

“Direct international flights have come and gone over the decades, with routes to Iqaluit, Canada and Keflavik, Iceland, but the short runway, remote location, and challenging weather have conspired to constrain expansion of direct international flights. Flag carrier Air Greenland operates a fleet of Bombardier Dash-8 Q200 aircraft capable of regional flights, including linking flights to international destinations through the larger airport of Kangerlussuaq (BGSF), while Air Iceland provides connections to Keflavik (BIKF) and points beyond.”

Oh I saw your piece - it was excellent (as usual).

I purchased the Aerosoft Nuuk for FSX a while and it is a great enhancement to go along with the ORBX Open GL.

Yeah, I think the implication was that the Dash 8 route to Copenhagen is not the normal operation…so they were just adapting to the reality that they couldn’t justify operating the A330 with so few seats filled.

Yep, I agree…still it was something where they just pulled their old Nuuk-Copenhagen Dash 8 flight plans off the shelf to use.

I also discovered that at recently as a couple of years ago Air Greenland was flying Dash 7s into Nuuk. I found a good FSX Dash 7. and Air Greenland skin and had at it! Great fun!

That is one of those routes (Nuuk - Copenhagen) where I would go buy a ticket and spend the day in Nuuk (or maybe a few days obviously) just to experience the flight. I have a list of those:

And a few others. Maybe when we are retired and we can take full advantage of non-rev flights (assuming there is still an airline to fly on…)

Aukland to Queenstown then Queenstown to Milford Bay! I have flown this flights in FSX ever since I got the ORBX scenery - years ago! Would love to fly them in RL…as a passenger of course.

You need to add NAS Guantanamo Bay to your list. The “GITMO Turn” in a large jet really must be experienced to be appreciated!

You wrote that list to tease me, didn’t you?