One of my favorite YouTube channels is Data is Beautiful. Some of you have likely seen their videos posted over the years. The channel recently became active again after a 3 year hiatus.

When I watch these videos, not only is the data interesting to watch, it also brings back many memories of those time periods as we watch the rise and fall of these products/businesses. Many of us were loyal to one product, then switched when the tide turned. Brings back some thoughts and memories for me:

Grew up with Playstation2, racing games fan - got a wheel setup even. Later came a loaned Xbox from my sister’s boyfriend at the time as he wanted to borrow my wheel for a while so he let us have the Xbox for a while. He also gave us his copy of Halo CE. After that we were team Xbox (360) which payed off for racing with Forza 2 double since the Xbox controller’s triggers were axis and not buttons like Playstation, meaning variable throttle and braking!

I never thought I would fully break away from console, as PC controller support even in games that were on console - such as Left4Dead or COD was atrocious. Plugging in an Xbox controller, the axis tuning was way off and there was no options then to adjust it.

These days, I can play Halo MCC or Infinite with controller and it feels properly native. I haven’t touched my Xbox1 in months. For me, the console war is practically dead - PC is the winner. Other games I have yet to finish on Xbox I am considering just buying on PC such as RDR2.

Recently though, news is coming of older titles being pulled from stores when the developer doesn’t want to maintain the overhead for them on their servers - which makes the older consoles with physical media suddenly seem relevant once again.

I was late to Chrome, early on I never had the major issues with IE that my Chrome-fanboy friend claimed existed. Later I went to Chrome because it was better, ran smoother, did more. Now I am back to Edge. Microsoft killed their home-grown Edge, and the current Edge is built from the Chromium open source project - same as Google Chrome. They are effectively the same but different skins.

Chrome’s Software Reporter tool is a CPU hog, which I don’t need. Edge doesn’t have one because MS gets telemetry from Windows already. Edge integrates to my MS account. I am not a user of extensions so Chrome has been removed. I’m even killing it off at work because we use O365 and Edge also integrates well with that, and business setups like Active Directory and Group Policy. Users signing in to personal Google accounts in Chrome is a concern too.

It is a bit funny how much information is out there in the data that is really just never looked at.

At work I had to edit and fix reports, so for my own learning I sometimes make my own reports to answer a question nobody asked so I can try a new function or feature of the reporting software and make sure I am doing it right. Some of those reports are now annual review data.

Sometimes you just have to look!

The cellphone wars over the years are fun to watch. My very first cell phone was a Nokia (in early 2000). I still remember that feeling of having all this POWER and FREEDOM in my pocket (with this brick

) I then migrated to Motorola for a few years. I had the original Motorola Razr back in 2004/2005. All thin and compact.

Then the iPhone in 2007 and well, the smartphone wars began. I was on iPhone for a few generations then defected back to Motorola with their Atrix. Then got on the Samsung/Android bandwagon in 2013 and have been a loyal Samsung user since. These Motorola’s were my first cell phones. 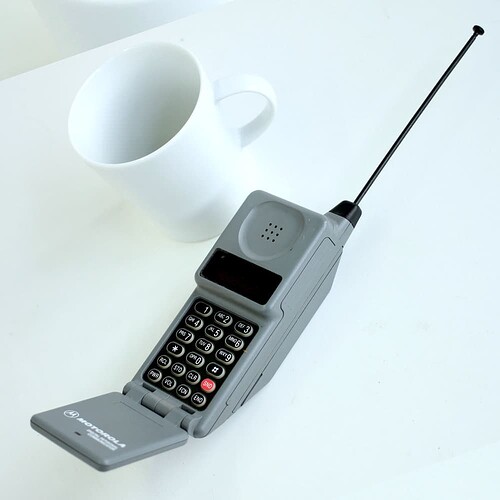