I have a question on the working of the DMT/ARBS. As of now it is possible to ground stabilize the DMT at any point and basically slew it around at will. How is this ground stabilization possible without knowing the distance to the locked point on the ground?

As I understand it, the ARBS is used to lock on contrast significant targets (like a TV Maverick seeker) and then use the rate of change of the depression angle to the tracked target to measure slant range in order to get a bombing solution (hence Angle Rate Bombing System). So tracking a solid contrast lock is needed to determine range. How can the the DMT then track any point on the ground as range is unknown?

No idea about the Harrier. But any modern plane knows its place in space and has a database for the terrain. The math after that should be easy.

Yes but this would lead the purpose the DMT ad-absurdum. The reason the DMT exists is to measure range for the ballistic calculations. If the range was already known through other means, you would not need the DMT in the first place.

How can the the DMT then track any point on the ground as range is unknown?

The flight computer knows the aircraft’s altitude, orientation (pitch,roll,yaw), and velocity & acceleration vector magnitudes and directions, the DMT/ARBS knows the angles from boresight to the designation and the angular rates of change.

With some trig and calculus figuring out and updating the slant range isn’t so bad and from that you can work out the math that leads to the AUTO release mode features.

But don’t take my word for it, read it for yourself!

But don’t take my word for it, read it for yourself!

Oh, this is sexy.

That is not what I meant. What you are describing is the TV being locked on the contrast of a specific target, thus supplying angular rate information that can be used to calculate range\a bomb solution. That is also what I would have expected from the system.

What we see in DCS is that the TV can be slewed freely to any point of the ground without any lock on contrast. For this to work would actually require the INPUT of accurate range information instead of providing range as an output.

For this to work would actually require the INPUT of accurate range information instead of providing range as an output.

So, what’s to prevent you from commanding the DMT to stabilize on a set of angles and then having the logic try to hold the camera on whatever arbitrary reference point gets calculated? You’re going to start running into some nasty errors if there’s elevation gradients but for mostly flat terrain it shouldn’t be too bad.

EDIT: THAT SAID, I’m not sure how RAZBAM’s currently simulating the ARBS or the camera stabilization. It’s entirely possible what we currently have is way too stable because they’re feeding the module too much truth data. No idea.

You could do that but it would serve no purpose other than to have a closer look at the target. If the camera is pointed at the target by the system it generates no additional data to improve the firing solution (it requires range input). The reason the ARBS was installed in the A-4 and AV-8 was to provide range output for bomb solution calculations, for which it needs to be locked on the the contrast of a target like a Maverick TV seeker. I do not see it working like this in DCS.

I might be off base here, but that’s exactly what the ARBS does. Hence the reason why you have to initially place it with the flight path indicator, then it just calculates how far off of that you fly. It also integrates with the INS. The idea that you would need a contrasting target to lock it on a position would be ridiculous. What if you needed to bomb a bridge? I do believe there is a target tracker function in the real Harrier one, but not a necessity for the system to operate.

The idea that you would need a contrasting target to lock it on a position would be ridiculous.

You need that to account for height differential between measured altitude and the height of the target. If the DMT is stabilized on a set of angles with no contrast lock at best it’ll work with the INS to track the point where infinite focal length intercepts the ground (read: the INS’ measurement of where the ground should be at those coordinates, not where the ground actually is) and at worst it’ll track the point calculated at infinite focal length assuming no elevation change.

If you’re contrast locked onto something the angular rates from boresight to whatever the tracker’s locked on to can be used to sweeten the estimate of target height and really improve accuracy.

You could do that but it would serve no purpose other than to have a closer look at the target.

You don’t see any redeeming qualities in allowing that?

Someone on the ED forum was kind enough to upload the ARBS section of the real TAC manual:

In fact a lock on is mandatory for an AUTO delivery. There is even a section discussing the some of the tactical difficulties using the system such as lighting conditions, smoke, low contract targets, shawows, large targets etc Some interesting bits:

Remember that in an auto delivery, the system will attempt to hit the designated target.
When using the TV to designate the target, knowledge of where the TV will typically lock on certain target types is critical to mission planning and success. For example, the edges of a revetment may provide sharper contrast than the artillery piece that is located within. An auto delivered Mk-83 that lands on the designation (in the berm of the revetment) may do little toward destroying that target. Linear targets (horizontal or vertical) will typically draw the TV to their extremes. On vertical targets the TV typically locks at the top, on horizontal targets the TV will typically run to an end, neither of which may be the place of desired bomb impact. Against such targets the TV is useful for LOS rate but CCIP with a TV lock and pilot placed bombs will most likely be preferred.

If your plan is to deliver in AUTO/TV but your TV locks onto a bush 30 feet away, you will be ready because you will have thought about switching to CCIP in such a case. If the TV breaks lock, you will be ready to transfer the designation to the INS and still deliver bombs on target on the first pass.

In fact a lock on is mandatory for an AUTO delivery.

Huh, is this the unrealistic behavior you were talking about? I haven’t tried forcing the Harrier in DCS to do an AUTO delivery onto some arbitrary point where I don’t have a lock but have stabilized the DMT on. Makes perfect sense that they force a lock though.

TL;DR-
Stabilizing at an arbitrary point on the ground without contrast lock isn’t a technical problem, but you absolutely need contrast lock with ARBS for an accurate bombing solution.

Stabilizing at an arbitrary point on the ground without contrast lock isn’t a technical problem, but you absolutely need contrast lock with ARBS for an accurate bombing solution.

Yes, that is a statement I can get behind. Although I would say “on flat ground”

In very broad terms I would also say that the DMT in DCS currently operates like a TGP, while I would expect it to operate more like a TV Maverick.

Btw: Thank you for splitting @fearlessfrog

Btw: Thank you for splitting @fearlessfrog

No worries, I thought it an interesting subject to grow out on its own.

For me, the AUTO and the targeting of the DMT modes in the Harrier seems pretty early, even in the overall ‘early access’ theme of the release. The FLIR is also meant to have a ‘hot spot’ detector, in terms of offering highlighted targets based on contrast, and that is mentioned in the pocket guide as something else with the tagline of “It will be enabled on subsequent updates.”

I love the Harrier, but in terms of systems it feels only about 50% there or so, so far. I prefer it that way, as I get to play, but it does mean that beyond the initial stuff then there are currently some big gaps still to be filled in (and probably redone).

Page 69 or so of the Pocket Guide pretty much calls out that it is probably more work in progress than other bits: 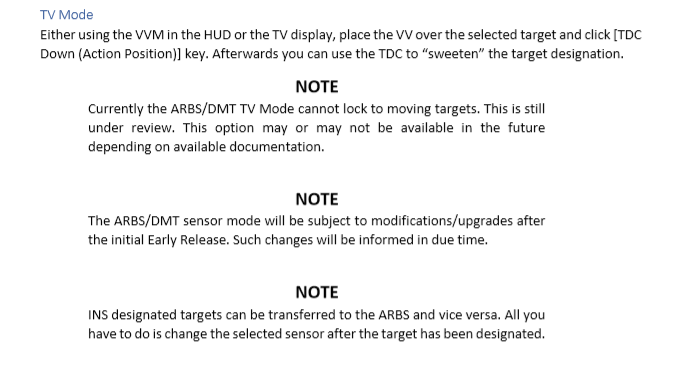 Yes this 50% is also my impression. AUTO mode is kind of pointless anyway at the moment because of how weird the azimuth steering line behaves.

I assume during slewing the DMT should be ground stabilized by using information from the INS and the radar altimeter, deducting slant range by assuming flat terrain and applying trigonometry. Now if you put the DMT on a ridge line on a hill ahead, you can easily see how this is not the case. Put the DMT TV just below the ridge and slew left/right. Observe how it perfectly tracks the ground in the vertical axis. Now move the DMT up slightly, beyond the ridge line and onto terrain many kilometers in the background. Now slew left/right. The vertical tracking immediately changes to perfectly track the new ground again.

I was reading through that ARBS document and found something interesting. If you get sidewinder lock, the DMT will track the target for identification. Curious if this is modeled. Also, maybe dumb question, but how does the DMT operate in darkness for a Night Attack?

I haven’t checked myself, but I think I read somewhere that cuing to the Sidewinder lock is not yet modeled.

You can’t use the ARBS TV mode during night, but using ARBS with a laser is still possible. Otherwise you would have to fall back on less accurate CCIP or INS modes. I think this was the primary reason why the AV-8B+ was equipped with a radar, to get consistent accurate slant ranges for bombing even at night and against all types of targets in all conditions.

how does the DMT operate in darkness for a Night Attack?

The ARBS laser detection works ok currently (using a JTAC etc to emit), but yes, the DMT is a black rectangle at night. We still have the LITENING TPOD to be fleshed out in early access as well, so that will help.

I believe some later USMC AV-8B’s used LANTERN pods, so in some ways the APG-65 sort of pushed the Dual Mode out of the way to make room in the nose, and then systems-wise just got over taken by external recon pods that worked well at night anyway, for the AV-8B II+.

Flir, you use the flir