I have a bunch of questions regarding the TWS & AIM-120s in the DCS F-15C. The image of the TWS radar screen below shows Contacts at the top and the PDT & SDT in the center. 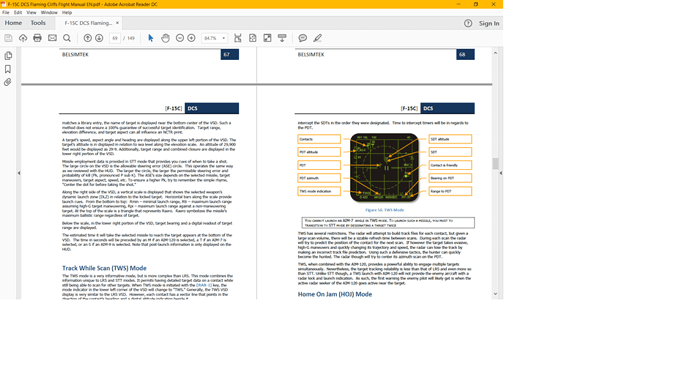 How are the PDT & SDT designated? Is this manual or automatic?

If I do not designate a PDT / SDT can my AIM-120s guide to the Contacts?

Must I designate a target before shooting an AIM-120?

If I shoot multiple AIM-120s will they each guide to a different target?

What do these terms mean in multiplayer?
Raygun
Mudspike
Buddyspike

And finally, after I lock up an enemy target (a rectangular symbol on the radar), I don’t need to wait until the aircraft type is displayed on the bottom of the radar screen, right? I can go ahead and shoot?

How are the PDT & SDT designated? Is this manual or automatic?

If I do not designate a PDT / SDT can my AIM-120s guide to the Contacts?

When you designate a PDT or SDT, you’re selecting a target track, and telling your AMRAAM to fly out to that point in space before activating. Without selecting a target track you can still fire, but the missile is going to go active off the rail and start looking for things to kill. This MASSIVELY lowers the probability of a kill, and is only “viable” within visual range (and I’m very loosely using the term viable.

Must I designate a target before shooting an AIM-120?

No, but see above.

If I shoot multiple AIM-120s will they each guide to a different target?

The FC3 F-15 can bug up to four target tracks. Your first missile should guide to the PDT, the next missile to the SDT, so on until you shoot on the fourth, wherein the system will cycle back to the PDT and cycle through again.

I’M LOCKING SOMETHING UP IN STT, TELL ME IF IT’S YOU

Raygun is an interrogative. If someone calls Raygun and suddenly your RWR shows a spike by a friendly aircraft, you respond Buddyspike. Be prompt, because this is usually called a few seconds before someone makes the decision whether or not to shoot at you.

Ironically enough, this is an incorrect term. Don’t tell @BeachAV8R

. This deals with what you are seeing on your RWR. Generally a radar can be searching for you, locking you up, or actively guiding a missile.

If it’s an airborne emitter that’s doing these things, seeing an emitter pop up on your RWR would be Nails (E.G. Nails 29, 12 O’clock)
If it’s an airborne emitter locking you up, that’s a Spike.
AFAIK there is no specific call for a RWR launch indication because when it comes to aircraft. I generally use “Defending, 29, 11 Oclock” or something like that when I’ve been launched on.

Why a definitive call for ground based radars but not air based radars? SAM systems generally have separate emitters for the guidance phase of their launch sequence, which is far easier to determine. If this radar just lit off, I know the SAM battery just shot!. With airborne radars it’s less distinct for a number of reasons not within the scope of this post.

Raygun == I’m painting someone with my radar and asking on the current channel if it’s anyone I like;
Buddyspike == response to Raygun, then I decide if I like you or not;
<removed Mudspike as it was/is incorrect as noted above and below by @near_blind>

Mudspike == ground based SAM is scanning. (detected on RWR);

That would be Dirt

The number (6) refers to the RWR designation right?

Whereas with A/A threats it is not always quite so clear cut and simple, combined with less radiated power and tighter bandwidths and it can often be harder to tell the difference between say a lock and getting shot.

For designating the TWS PDT & SDT - I can use TMS Forward on up to four targets. I need to do that to get the AIM-120s to go after each one. If I make a mistake and double TMS Forward on any target then what I’m getting is STT.

@near_blind I’ve heard you say “Defending…” - so that’s when you are … ? Are you looking for help?

Seriously, do you want others to come to where you are?

For designating the TWS PDT & SDT - I can use TMS Forward on up to four targets. I need to do that to get the AIM-120s to go after each one. If I make a mistake and double TMS Forward on any target then what I’m getting is STT.

Welcome to the wonderful world of Flaming Cliffs. One one hand it’s simpler. On the other hand the multitude of context dependent ergonomic functions built into a modern aircraft meant to aid in situations like that are part of that “complexity” every one is afraid of. These are things that get cut when you start pairing down systems to their conceptual base.

@near_blind I’ve heard you say “Defending…” - so that’s when you are … ? Are you looking for help?

Seriously, do you want others to come to where you are?

In an extremely general sense, you can reduce any fight to offensive and defensive actions. Offensive is “fangs out”, pointing at the enemy, launching missiles, etc. You have the initiative, are driving the fight with your actions and are forcing the enemy to react to you.

Defensive is when you are taking actions to reduce or negate enemy actions to preserve your life and airframe. You are reacting to the enemy, you are no longer driving the fight. Your SA is suffering. That’s the general sense, you can extrapolate further meaning based on the context of the situation.

If you’re in an air to air engagement, what you’re defending against is more important than the fact you’re defensive. If you’re defending against, say, a BVR shot from a Flanker, there’s not a whole lot for them to do in the immediate sense. It can reveal pertinant information about the engagement (you’re not going to be helping kill stuff as you’ll likely be running away. The Flanker will be glued to you and thus less likely to check his surroundings, thus an easier kill), but that’s more topics for cooperative flight strategy.

If you’re defending against, say that same Flanker who has merged with you and is currently behind you saddling up for a gunshot, that’s a much more critical situation. One of them should make the effort to hustle over to help you.

If you’re defending against a SAM, then that tells your wingmen where the SAM is, and you probably going to be busy flying, and thus not doing whatever you were doing immediately before you were shot at, but otherwise there’s not much they can do (unless you’re doing SEAD).