DCS F-18 elevator/flap UP/DOWN issues…with the AUTO ?? configuration i can not hardly fly this thing… no airspeed…etc. PLUS it seems bombs do NOTHING either…i can drop them…But, do they need to be fuzed ?? armed?? first? if so how ( key? )
any tips/ HELP on both appreciated…i have tried forcing flaps into HALF…no difference i want to just turn whatever it is off… ( some auto recovery mode??) like a anti stall mode that stays on all the time…as you can see in video…i panned around cockpit slowly so perhaps you can see a setting I Missed?
Thanks in advance.

have a small video trying to show what Im talking about…and a pan of cocpit area ( perhaps someone can see a toggle I have set wrong? ) i DID have flaps in HALF…but not sure in video if plane reset to auto…anyway…it does NOT change how the elevatoes/flaps are UP/DOWN all the time… i do NOT have this issue with other planes i fly in DCS…only this 1…MAYDAY Help please !!

For the bombs, looked like JDAMs that aren’t timed out or have INS, plus might not be fused either. A primer on bomb fusing here: For the elevators, you’re asking it do things through a computer, so due to speed etc it might just be like that. Are you starting in the air or cold starting it yourself?

If you haven’t seen it already, this guide covers all things Hornet

| Chuck’s Guides | DCS Guides | The McDonnell Douglas F/A-18C Hornet is one of the most iconic american aircraft operated within NATO forces. Designed to be a multi-purpose fighter and attack…

First thing: your INS is not aligned properly which can lead to errors with the jdam (might not hit the target)

And secondly: your efuze is off. There’s no way that bomb is going to explode this way.

Edit: sniped by @fearlessfrog and his reply is far more detailed

thanks…back to the books…i have watch many tutorials…/videos reading etc. no luck SO FAR

also, i have this issue with both COLD/HOT/AUTO/MANUAL starts.
thanks for tips…will go through your posted material…perhaps i will SEE whatever it is i missed.
again THANX!!

Good luck. Only other things I can think of for the elevators is:

thanks i DO/have pressed the FCS reset to no avail.

also , like i mentioned ( joy calibration etc. ) NO issues in any of my other planes…even the f-16 is fly by wire…BUT the hornet is doing some really funky control surface action…that is why i Figured for SURE it was just some switch i must have missed…as i can nat be the only one that has had this issue…But, i can not find others that do.

Again Thnaks for all the time to try and help me figure this out ( frustrating)
i want to learn it all piece at a time…BUT heck i want to fly some while doing so.

also , like i mentioned ( joy calibration etc. ) NO issues in any of my other planes…even the f-16 is fly by wire…BUT the hornet is doing some really funky control surface action…that is why i Figured for SURE it was just some switch i must have missed…as i can nat be the only one that has had this issue…But, i can not find others that do.

Take a screenshot of the FCS page on the DDI and post it.

In AUTO, the flaps and leading edges will kinda do their own thing, shaping the wing for best performance at any given AOA. However, in HALF/FULL, they should stay there, I think anyway, unless they come up above a given speed to prevent damage or something. Either way, they shouldn’t be flapping. I’d suggest control bindings, but you’ve already looked there…

I had exactly the same issue with the F18.
Nose kept going constantly up despite having the stick full FWD.
Literally impossible to fly.

In this case you have to FCS reset while having the flaps in “auto” position.
Best is done on the ground before taking off.

I page @Derbysieger because he’s a master of this stuff and he told me to look at a specific MFD page to see if there was an error message regarding the FCS.

I think I had you check the FCS or checklist page to see what your trim was set to, right?

So what you can try before taking off is to press FCS reset, then your take off trim button. Your trim should now be set to +12 Nose Up. When starting from land you can leave it there, when launching off a carrier bring up your checklist page to heck your weight and set T/O trim accordingly.

Yes, that was it! 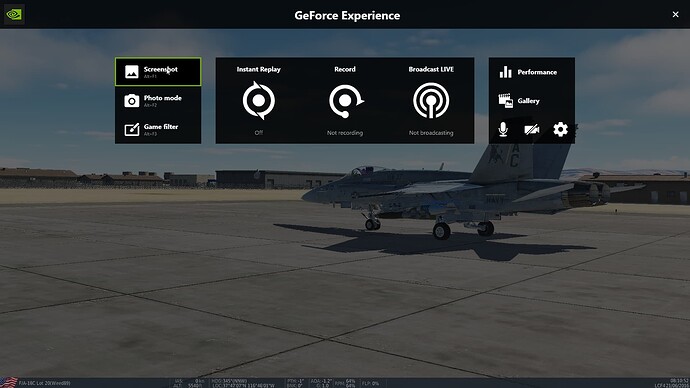 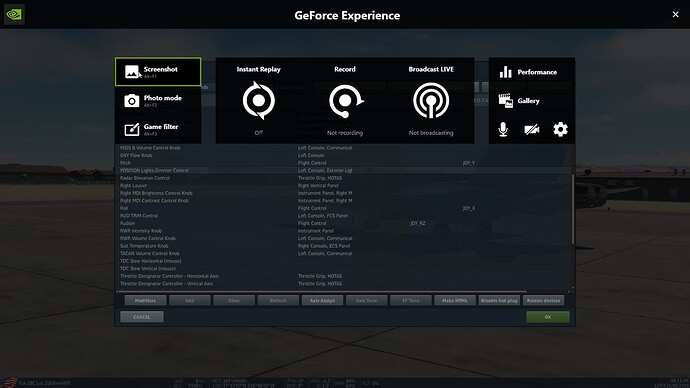 ok pix of the fcs sitting still on ground. as yo can Hopefully see a ton of up 12 degrees i belive…and trim has ZERO effect. this is from a cold start…bot manual ( trying to learn it…& useing auto (win+home)
effct is the same.

i did check FCS in AIR start mission…IT showed elevators at 0 Degrees…I am So lost on this issue not funny.

Food for thought…COULD i be over stressing the plane?

+++G’s and actually BREAKING it?? therefore…the thing is going into auto survival mode I.E. flaps + up elevator to survive ? ( a built in safety thing ?? ( just trying to wrap my head around something i can not figure out…or turn OFF once it is on)

is there a way to actually USE the F-18C HAG V1.5 Kneeboard Pages photos inside of dcs f-18 cockpit?i.e. these are a few of them… 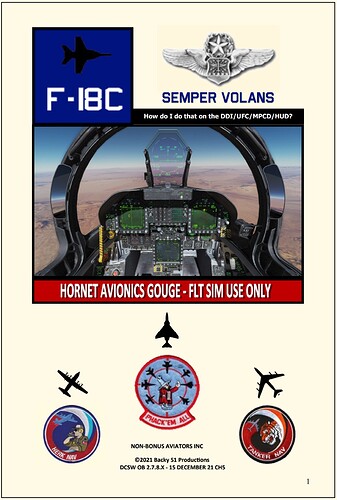 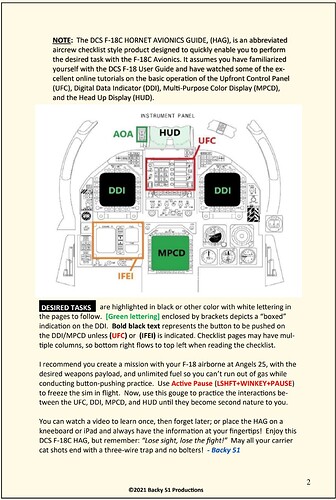 Stab trim shows 12° NU, however you have a bunch of errors on the bottom left that shouldn’t be there.

My advice: Do a cold start using a checklist. That way you won’t forget something important and also make sure it is not too old.

If that doesn’t help, run a repair of your DCS install

This image tells me you’ve done the initial FCS Reset - good! If you hadn’t, control surfaces would have Xs in those boxes. @Derbysieger I don’t know if you can actually clear out those codes in DCS. Even with a full FCS BIT I wasn’t able to.

That you have 12 Nose-Up with everything else zero’d means you’ve hit the T/O Trim but your flaps are still in AUTO. Set flaps half, then hit T/O Trim. Display when done correctly should look like this: (Not including adjustments for gross weight) 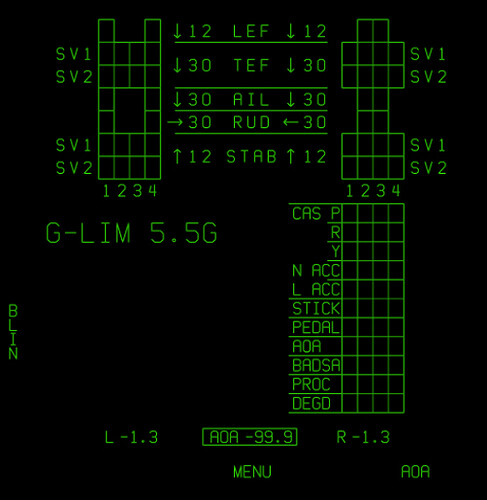 Now, for your initial issue.

+++G’s and actually BREAKING it?? therefore…the thing is going into auto survival mode I.E. flaps + up elevator to survive ? ( a built in safety thing ?? ( just trying to wrap my head around something i can not figure out…or turn OFF once it is on)

Could be. Not a “survival mode” or anything, but you could physically break flight controls. But without seeing your HUD to know what your max G was, we can’t say for sure. My recommendation is to focus on the basics for now. Go through the resources provided on this thread and just focus on getting airborne. If you can’t get the jet off the deck without breaking it, JDAMS are probably a bit too advanced right now. No worries, just gotta work up to it and learn.

If you use the checklists mentioned here and still have the stab issue (without any other cause, IE an over-G), there may be something messed up with your DCS itself.

is there a way to actually USE the F-18C HAG V1.5 Kneeboard Pages photos inside of dcs f-18 cockpit?i.e. these are a few of them…

This checklist is beyond what you need right now. It’s focused on tactical avionics, not basic start and takeoff. Personal opinion but it looks like

anyway. Chuck’s guide (linked above) is a far better resource for getting started.

If you want something a bit more concise and kneeboard friendly, this one is a decent option as well:

Also, check out Laobi’s startup video. It’s fast-paced but quickly covers all the basics for starting the jet. It’s nice for a quick reference to make sure you’ve covered everything on your own.

Lastly, you can just use Print Screen to take screenshots in DCS. They’re saved to the Users/Saved Games/DCS/Screenshots folder.

Thanks @boomerang10 , just goes to show how long I’ve been out of the Hornets cockpit. Too many more exciting modules to fly (Tomcat, Viper, Anton, Jug, Mossie, Hind, Viggen …

I LOVE Minsky’s checklist, it’s very well done and packs a lot of great information (virtually everything I need in the cockpit) into a well organized format that makes stuff easy to find. Wish he would do one like that for every module!

ETA: Heck, I wish our manufacturer checklists in the real airplane were as good as his…

THANKS again!!! LOTS to go work on !! will report back when i actually ACCOMPLISH something

@weed89 checking in, how’s the Hornet coming along?