Guest writer @Chuck_Owl gives us a great preliminary look at some of the features of the DCS: F/A-18C Hornet which is entering Early Access… 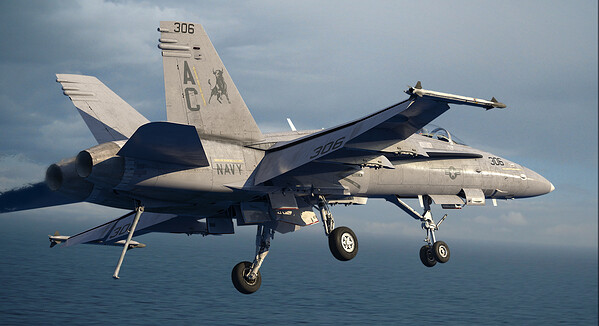 The DCS Hornet isn’t just some generic fighter aircraft. It has character. Switches click and clack, aural warnings ring in your ears during built-in tests, fat rain droplets bounce off the plexiglass, the canopy actuators whine painfully, the APU starter does a painful whirring sound when cranking up, the General Electric F404 howls and roars once the afterburner kicks in, the carrier steam catapult rattles as your crushed bones are jerked back into your seat during takeoff…all these small details bring the Hornet to an unprecedented level of immersion. The sound design is rich and researched. There is such a sense of physicality with the cockpit that once you step your virtual foot in there, you won’t want to leave. 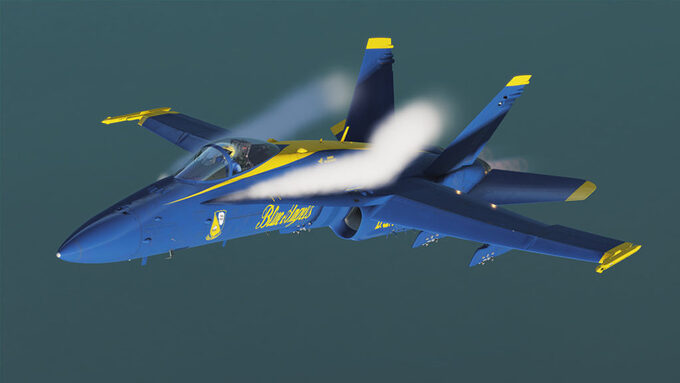 The Art of Flight

Here are three letters for you: FCS. The Flight Control System of the F/A-18 is a digital fly-by-wire system that has a rather interesting story behind it. I could bore you with details about it for hours and hours, but overall the engineers at McDonnell Douglas went to great lengths in order to make a high-performance aircraft with a peculiar aerodynamic shape fly “easily”. 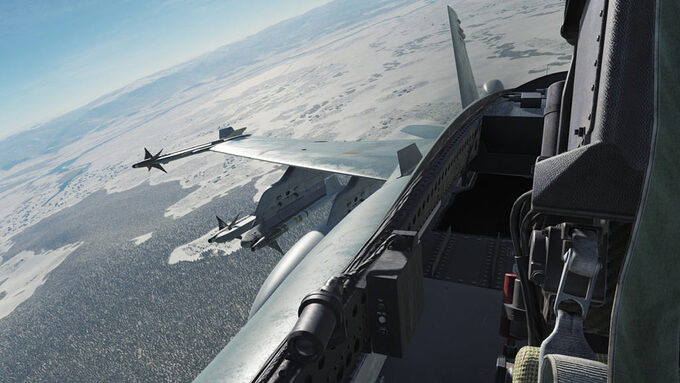 The first impressions I had when flying the DCS Hornet was suspicion at first. Is it supposed to be as easy to fly? It looks like if I set the aircraft in a specific attitude, the nose just stays there. Well, I asked around and it seems like it is as per aircraft; the Hornet has some pretty wild capabilities aerodynamically speaking. High Alpha manoeuvers and spin recoveries can be performed almost effortlessly thanks to a robust simulation of various control laws struggling to keep you alive. I had to press the “F2” (External View) key to finally figure out what the FCS is actually doing behind the scenes to fool me into thinking the Hornet is “simple to fly”.

I’m a systems guy by trade, therefore I love to try to figure out the extent of the madness of the coders behind the powerplant, sensors, avionics, armament, lighting, pneumatic, electrical, hydraulic and fuel systems. Yep, the moving map works! Overlay text is still work-in-progress though. 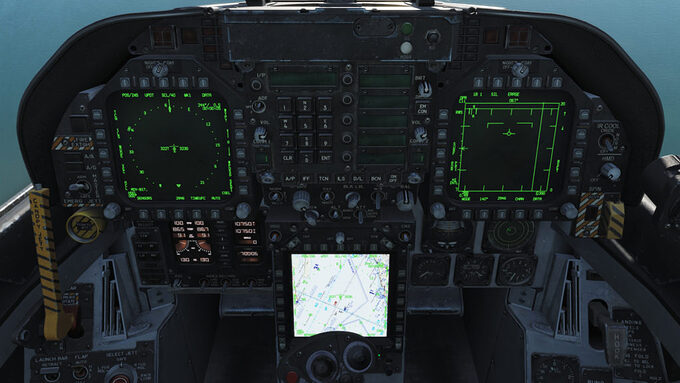 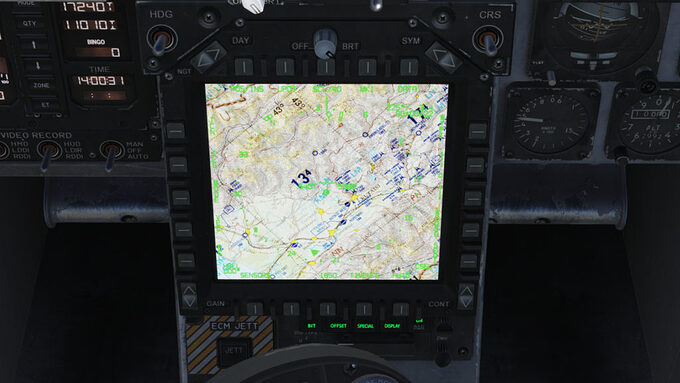 I’ve come to the conclusion that they’re very much insane (in a good way). The Hornet itself is rather simple to operate thanks to automated systems doing most of the hard labor for you (keyword: “most”). So… you started your engines, did the Fire Test and your ECS (Environmental Control System) seems non-functional? Did you forget something? Well, too bad! The Fire Test closes bleed air shutoff valves and requires you to reset them. That’s the beauty of a study-level simulation: problems rarely happen just by themselves and most of them can be explained logically if you look into it. You will learn. A lot. You will learn that the hook under your aircraft that catches wires on a carrier can bounce off the deck if you come in too hot or with a wrong angle of attack. You will learn that the engine response has a bit of lag into it. You will learn that the top speed of a Hornet isn’t limited as much by how well you fly as it is limited by the additional drag generated by your ordnance and the insatiable thirst for jet fuel your engines have.

Eagle Dynamics’ Hornet manual is quite exhaustive and the NATOPS manual available on the net is full of juicy tidbits of information as well. I am sure you will have a lot of pleasure sinking your teeth in both them. Also, circuit breakers are functional! For instance, pulling the FCS CHAN 1 breaker will have dramatic effects on the Flight Control System. Few developers go to this level of depth for aircraft when it comes to simulating damage and malfunction effects. Luckily for us, DCS keeps pushing the boundaries further with each new module. 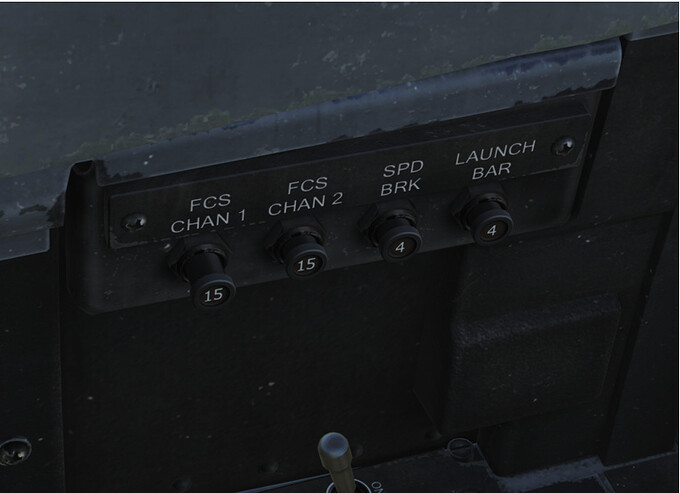 Regarding navigation stufff. we already knew that waypoints can be set in the mission editor… but they can also be edited by using the Waypoint Menu on the DDI and the UFC (Up-Front Controller) keypad and option select buttons to edit the coordinates of existing waypoints. 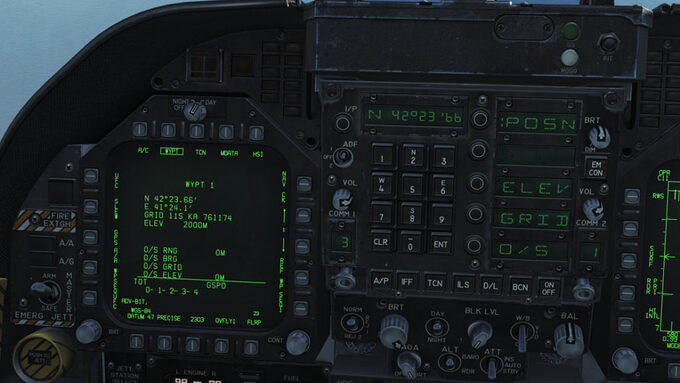 Keep in mind that while the Hornet is in early access, some systems are missing (sensors, advanced weaponry like SLAM-ERs, Mavericks, Harpoons) but the aircraft itself feels very much usable (see this list of features).

The F/A-18 modeled in DCS isn’t just some 3D model hastily welded together; it’s a living, breathing, squeaking hunk of various aircraft parts tied together with string. The nose gear model compresses as you slam the brakes, the catapult launch bar locks into the launching rail mechanism, the wing flexes as you start pulling Gs. The cockpit looks worn out and lived in, and so does the exterior. I think many flight sim developers are great at modelling an aircraft that’s pretty to look at, but the Hornet looks even better than that: it looks like it has a story to tell. Each livery is detailed and polished. 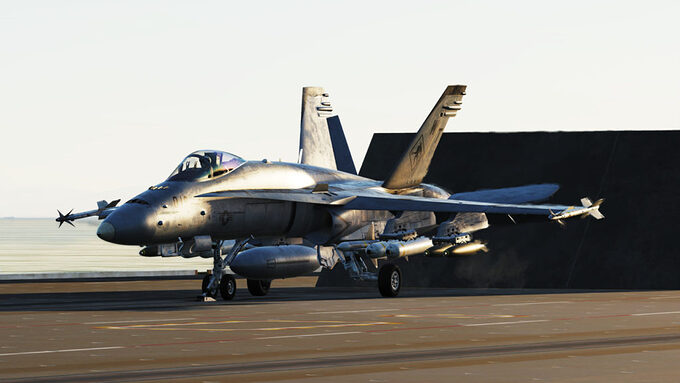 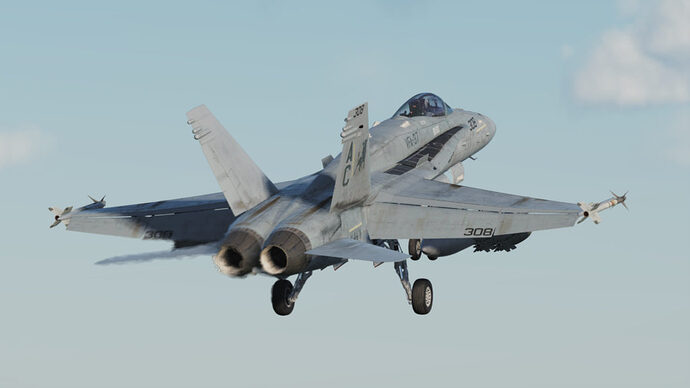 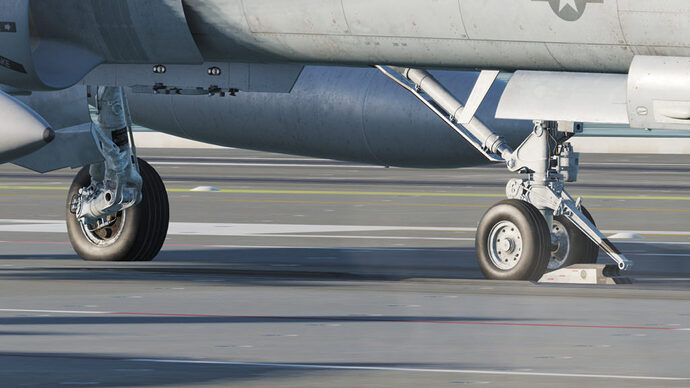 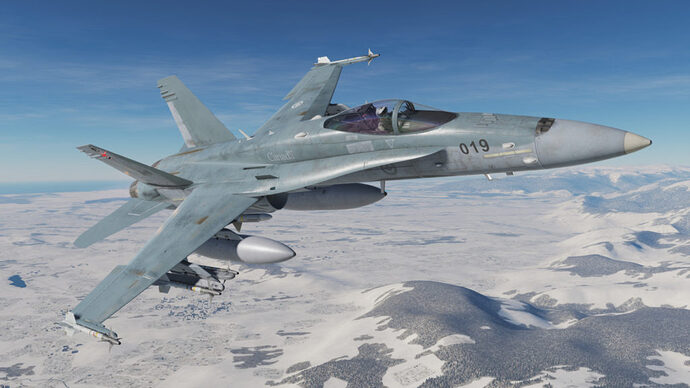 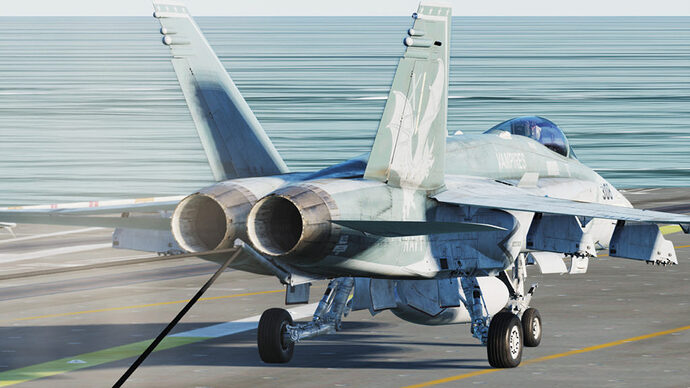 The interior of the cockpit is worn and full of scratches, greasy fingerprints and dirt. The DDIs look like real screens, flickering when they’re warming up like old TV monitors of the 80’s and difficult to read in certain lighting conditions. It’s simply amazing. For the Oculus Rift or HTC Vive aficionados, the F/A-18 is a real treat for the eyes. 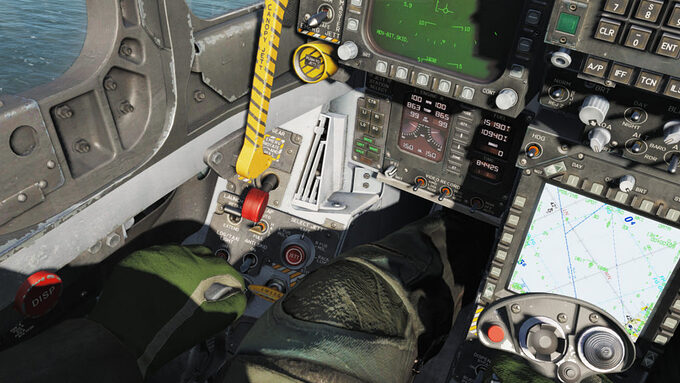 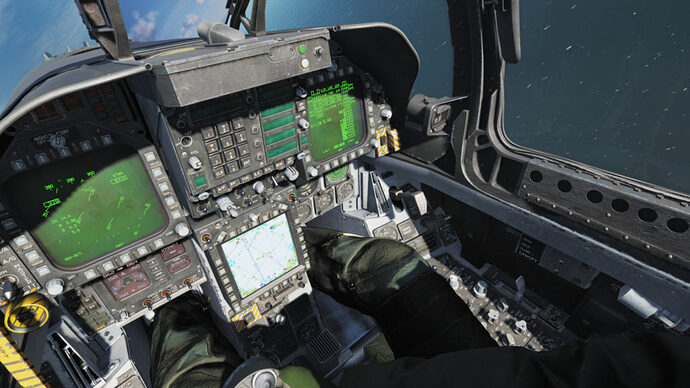 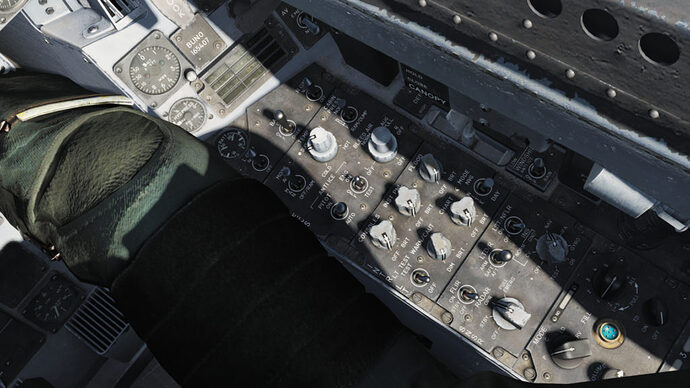 A Sense of Scale

I’ve seen a number of Hornets in my life in various airshows, and I am constantly surprised to see how big it is. Granted, it’s not “F-14” big (ha!) but you certainly feel very small when standing right next to it. When taxiing in VR, you feel quite intimidating when you pass next to an infantry man. I can only imagine how we will feel if we eventually get a carrier deck full of green and yellow shirts running left and right to get the aircraft loaded. 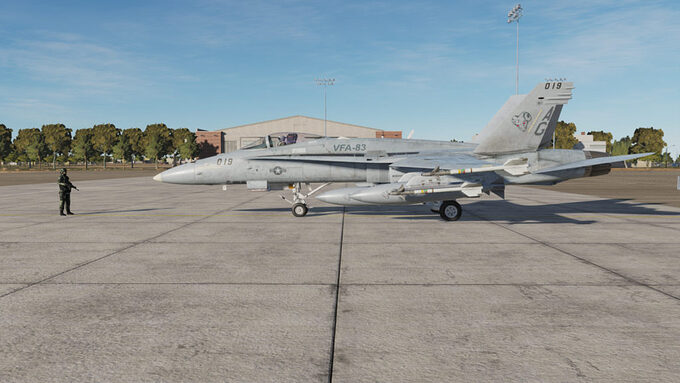 The sense of scale goes even beyond that. During carrier ops, the ship looks like it’s the smallest runway in the world. While being a Fighter Pilot is a hard job, DCS has given me the impression that being a Navy Fighter Pilot is even harder. After dozens of landing, I still feel the adrenaline kicking in when I’m going for the “Three Wire” (arrestor cable), being tossed left and right by crosswind, turbulence and my own shaky hands. When you botch a landing, you’ll know. Catching the first wire will likely happen if you approached way too close to the stern of the ship. If you landed too far, missing the wires will result in a “bolter” and a sudden urge to slam the throttle forward to avoid the mass of water clutching at your toes.

A New Kid in Town, a New Way to Fly

The F/A-18 brings something new and fresh to DCS: a multi-purpose naval aircraft. This means that most of your operations will revolve around (you guessed it) carrier operations. Carefully planning your flight will now be more important than ever since the Hornet is a real gas guzzler and fuel is a rather scarce resource at sea. I’ve flown the Hornet for a few hours now and I can’t count the number of times I came back to land on fumes. This creates unbearably tense situations. Air-to-Air refueling will be quite important too, but so is protecting your carrier. 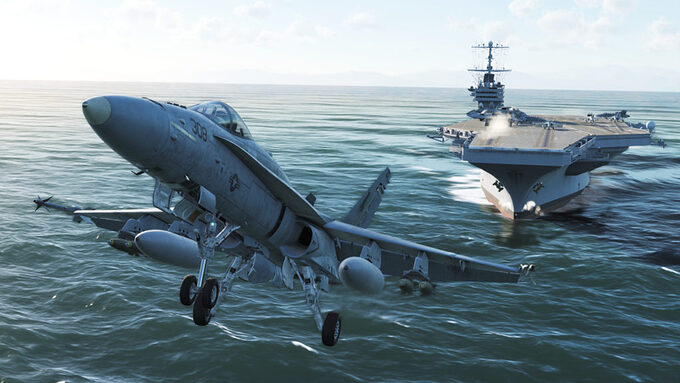 Combined operations with different aircraft types will be easier than ever. As new weapons and equipment become available in the next months, the Hornet’s capabilities will be able to complement almost any other aircraft’s, making it one of the most valuable assets in multiplayer. SEAD (Suppression of Enemy Air Defenses) will be very relevant when operating with other aircraft like the Warthog, which is not equipped to deal properly with long-range anti-air defenses. The Hornet will be able to be used in joint operations with Harrier and A-10 strike packages. I think multiplayer operations will become much more interesting since Viggens will have to hunt one of the most dangerous and heavily defended targets in DCS: a new aircraft carrier.

The new CVN-74 carrier is more than a simple home base: it’s your lifeline. This ship feels like your new home. Once the deck is cluttered with pilots taking off and landing, the John Stennis looks alive and buzzing with activity. Catapult launches, missed wires, aircraft flying in a pattern around the ship, escort cruisers…this might just be my new favorite way to fly. The carrier is quite detailed and immersive. Landing on the Stennis will be serious business. It will take a lot of practice, and landing the Hornet feels unlike anything I’ve flown before in DCS. The landing gear is low and sturdy, and you will constantly feel like you’re about to smack your 25,000+ lbs heavy aircraft on the deck. 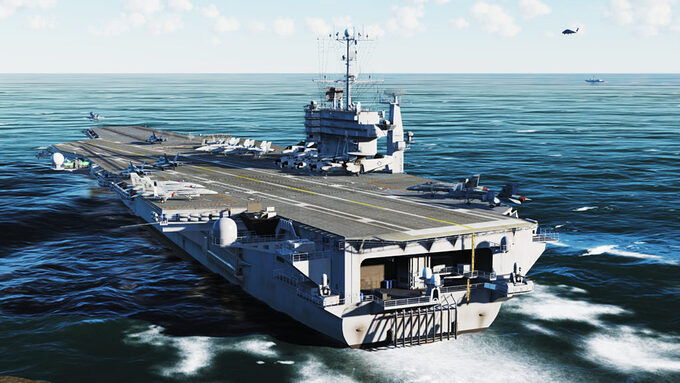 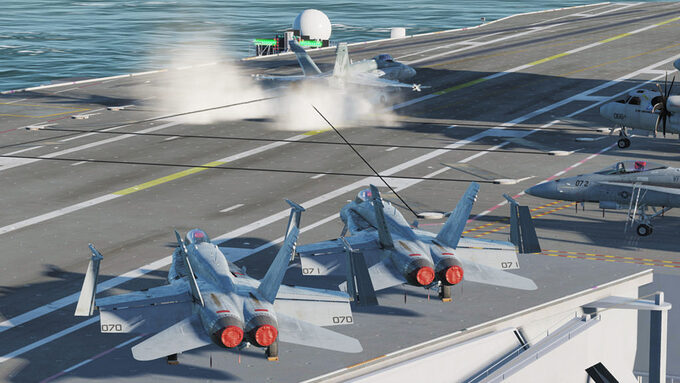 Those of you who fly Razbam’s AV-8B Harrier will feel right at home; McDonnell Douglas designed both the Hornet and the USMC variant of the Harrier II. The UFC (Up-Front Controller) is very similar, and the Hornet’s DDIs (Digital Display Indicator), central AMPCD (Advanced Multi-Purpose Colored Display), Moving Map and sub-menus share a lot of commonality with the Harrier’s MPCDs (Multi-Purpose Colored Displays). The Nosewheel Steering system and flight stick are similar as well. Overall, both aircraft are capable ground-attack aircraft that were designed for different missions but with complementary objectives in mind. 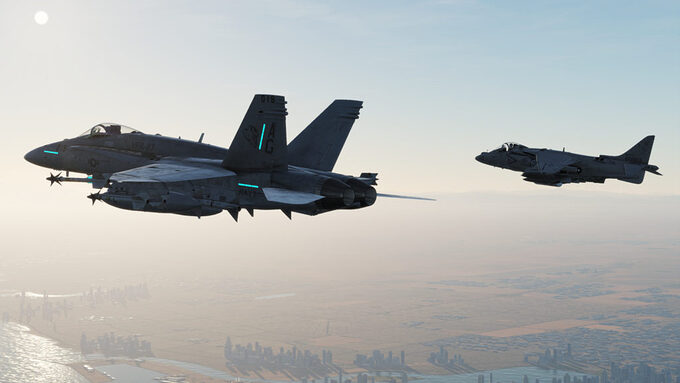 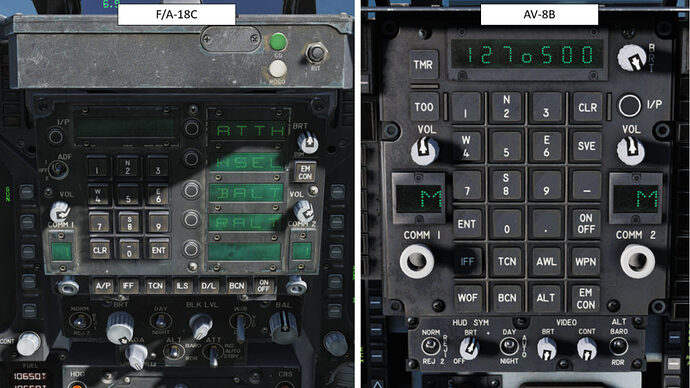 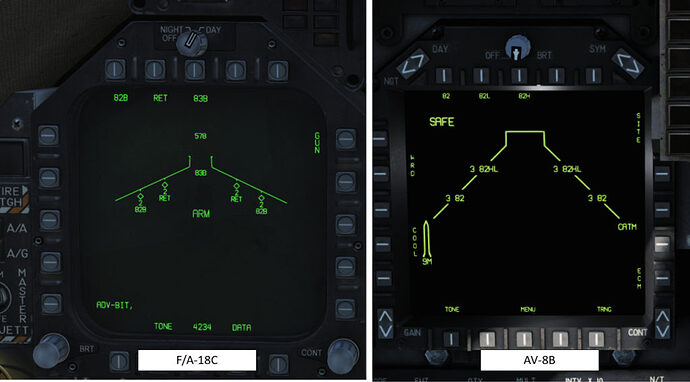 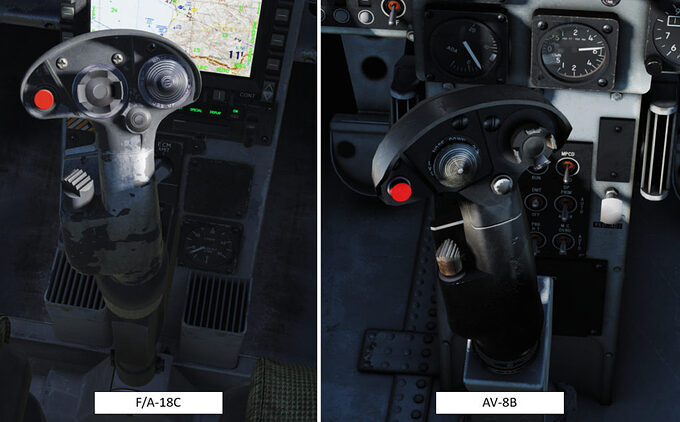 As the release date comes (May 30th, yikes!), so ends the $20 discount that comes with early access. For those who want to wait, it’s totally fine. However, the Hornet in its current state is the sort of early access that I like: the aircraft itself is functional and most basic systems are implemented. The armament available for now is a bit “crude” (dumb bombs, rockets, guns, air-to-air missiles) but I feel like we need to learn to walk before we learn to run. Most of what’s missing is advanced weaponry and system modes, but nothing that is basic is missing. Therefore, the Hornet we have does not provide negative training, which is great since I don’t like having to un-learn things. That will not be the case with the Hornet; I’ll simply have to be a bit patient and learn to walk before I can learn to run.

A guide, you say?

Yep, once again, I’m working on a “Chuck’s Guide” for the Hornet. It will take a few more weeks before it’s ready, but it’s progressing smoothly. There’s a lot to cover, but as long as the coffee pot is not empty… there is still hope. 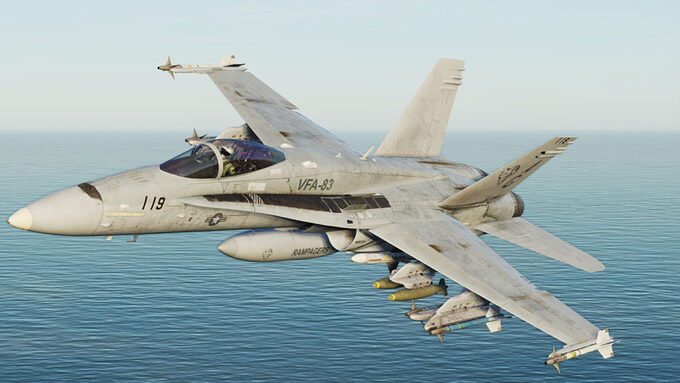 Really nice job @Chuck_Owl - heck, I have the Early Access module and you made ME excited to fly it…haha…! Looking forward to the Chuck Guide eventually… Thanks for letting us host the write-up, and thanks to ED (@NineLine) for providing us with an early glimpse.