You should have asked how many have downloaded the A-4 just to see if it would be worth including in a mission. It’s such a fun little bird to fly around in.

To all: One more question!

@staff are you able to edit the F-86 typo?
Apparently Discourse allowed that in 2018 potentially.

I see a way to do it, but I’m hesitant to just change the text because I’m worried it is tied to the way the poll data is collected. Like there might be something going on behind the scenes where if I change it, it might break the results.

I voted YES for the A-4 despite I dont have it. But I would like to try it.

Yeah…I actually haven’t tried the A-4 yet either…

It’s entirely fair to answer yes as a “I would install if required” I suppose.

There is almost certainly a setting the mods could alter to allow a longer edit time. What amount of time the software would allow is the next obstacle. Some software will allow edits indefinitely and others have a hard coded limit.

I see a way to do it, but I’m hesitant to just change the text because I’m worried it is tied to the way the poll data is collected. Like there might be something going on behind the scenes where if I change it, it might break the results.

The answer for that question @BeachAV8R is to create a Test poll and after a few votes have been cast start editing it. If nothing breaks in the test poll you can be reasonably assured that it will be fine to come back and edit this one.

staff are you able to edit the F-86 typo?
Apparently Discourse allowed that in 2018 potentially.

You (or staff stuff) could edit the text of the post but not the poll options before I think.

Just tried a test poll and the results are in. Editing resets all the votes, and I can only edit the base data and not via the web UI. The poll options can not be changed after the first 5 minutes, sorry. They did this to prevent shenanigans.

We can add a new type of ‘extended poll plugin’ that does this, but it doesn’t come with the forum, so I’m sort of getting exhausted just thinking about finishing this sentence etc.

Eff it, OP will just have to live with the shame of his typo. Shameful display @Wes!

Actually, it was a covert staff training exercise. This entire thread is a farce!

I raised this question because we have a lot of great WWII-early Cold War modules but I feel like that part of my stable gets hardly any use due to lack of scenarios. As I’m primarily a multiplayer guy, I’d like to introduce scenarios to use these aircraft, but the problem is many of the assets can’t be used unless one owns them (WWII assets pack is the big one here). So before committing to making a new mission, I’d like to see what’s viable and what isn’t.

That’s part of the reason for this poll as a WWII-early 50s scenario would be no helicopters, but a 60s-70s would be Mi-8, Hip, and possibly Gazelle.

./me rubs hands in glee… Looking forward to getting my rickety crate on with you guys!

Part of the allure of this is the possibility of dogfights between Mi-8s and Spitfires! 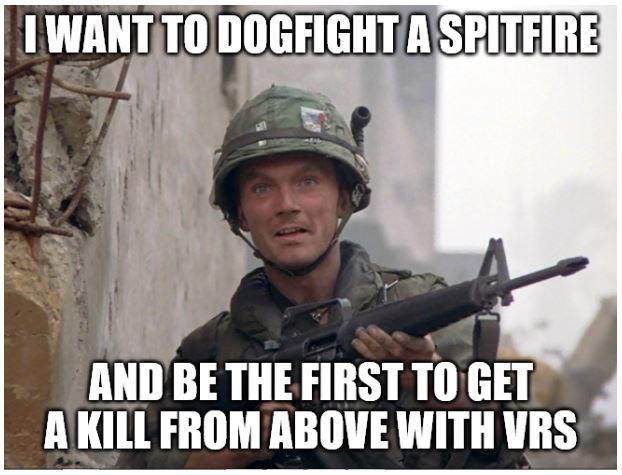