This might be a dumb question but you’re on the internet so no refunds.

When I designate a waypoint on the ATFLIR as a target (the WEPDSG or something close to that) then it slews the Maverick t(F’s if it matters) to that point as well - super handy for checking out an area.

What I want to do is then move the TDC on the Maverick a bit, slew it around and lock something up. So far the only way I’ve found of doing that is this:

This seems really clumsy, what am I missing? Is there some sort of ‘hold down this’ or Cage/Uncage sequence I need to do?

Also, are people using the TDC Depress held down to slew? I’ve played with the Hornet special option to turn it on/off but it seems opposite to how I think it should work. What’s up with that?

I haven’t used MAV with a pod since pre-ATFLIR but I’ll try it out later.

As for the TDC depress, I kept the normal/real mode of requiring depress however since the WH Throttle is so finicky I opted to double assign TDC depress to both the ministick push AND the boat switch forward such that I have a momentary and switched assignment.

AND the boat switch forward such that I have a momentary and switched assignment.

Ah, that might be it - I have assigned something else to be the TDC depress as an additional bind as a helper, just so I don’t have to try to press the stick in, but I think I might need to do it as a toggle, as in the switch assignment. I think I did it as a momentary press. Thanks @Wes.

Yep, let me know about the ATFLIR, I don’t recall it being this odd on the Lightening Pod. It could be me fumbling it though, so curious to see. It’s like if you have a designated waypoint then you can’t slew until you take it off.

Well at least one benefit to ATFLIR is breaking TGT doesn’t boresight the pod. Although I wish it would stay in an inertial track instead of holding the angle and therefore tracking along the ground with the aircraft.

Yep. One thing I am getting more used to is the HOTAS shortcut taps and holds. Double hitting the undesignate with the ATFLIR as sensor puts it in snowplough mode. Just like holding Sensor Select down flips between the HSI and SA for the middle DDI. Especially with ACM, there’s all sorts of Konami Codes for the Hornet I’m just now finally picking up

Just like holding Sensor Select down flips between the HSI and SA for the middle DDI.

I’ve been meaning to post this, it probably needs its own topic but… 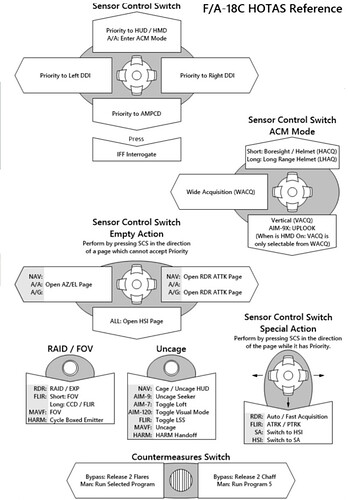 (Stolen from Chuck’s Guide found on a website named after the Mud Pike Mug.

The Sensor Control Left, to open up that AZ/EL page is another good one.

Was LHACQ in Wag’s videos? I don’t recall it at all. Same with 9X Uplook.

I don’t think so. I only started to use it very recently so wonder if it got added after the video? (hang on, are we in the wrong topic?

I haven’t used MAV with a pod since pre-ATFLIR but I’ll try it out later.

Hmm, I wonder if I’m just not using the ATFLIR right. After I do the Waypoint Designate I think I probably should be at the ATFLIR but then hit Undesignate. That allows me to slew around and assign another TDC target (perhaps in Area or Point mode as well). Once I’ve got the thing on the thing, then I uncage the Maverick and let it slew to the target.

I think my mistake is leaving the Waypoint Designation as designated, because it can’t move / slew from that.

ATFLIR + MAV F
Same result as with TGP will the following exception:
upon undesignation ATLFIR will drift, but remain on-scene.

Notes:
Designating with pod again will pull maverick to new location when you swap DDIs again.
Setting ATFLIR to an area track didn’t cause the maverick to pull to the pod’s new location but did prevent me from slewing the maverick until I did an undesignate on the ATFLIR screen.
I gather this will be the same with LITENING but because it returns to snow plow I do not see much use in testing that because of the time lost in manually bringing the LITNENING back to the target area manually.