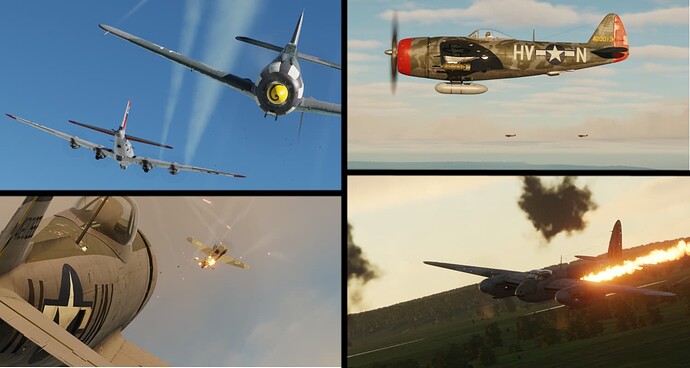 I’m releasing my Channel Sandbox missions. They started as simple missions where I could practice with the warbirds, then they evolved into a sandbox. Nothing dynamic, but still plenty of things to do: Intercept, escort, OCA, ground attack, ASW, recon, basically anything. It isn’t balanced for PvP, but can be played online. AAA and Flak has been nerfed the best I can with barrage triggers and placing guns in defilade so they can’t fire on low-flying targets. AI are dumbed down and will only go after their assigned task, mostly ignoring everything else, but will take evasive action.

Full moon for maximum illumination; I recommend the winter map for easier flying. Active airfields will pop illumination flares for landing whenever same-coalition aircraft enter the trigger zone. You will probably need to increase gamma or turn out your room lights to taxi out to the runway.

Roughly the same assets as above, but fewer client slots, no radar sites or V-1 sites, nor aircraft at Abbeville. You do get some landing Jerries to spawn near Merville if you fly Mosquitoes (and only Mosquitoes) for some intruder fun.

Thanks @Clutch! Gonna check these out now!

Always nice to have someone else mission so you don’t know what’s coming. Thanks

The trigger zones that spawn the Mossies and Jugs might be a little ambiguous, so if anyone gets lost I can grab a map shot to show where they are.

I updated the missions with some fixes. Mainly the B-17s weren’t playing ball. I finally got them to stick in a combat box. Also lead bomber group is immortal since the AI go retarded if the leader goes down. The left/right/back formations are killable.

Second update to the daylight missions: