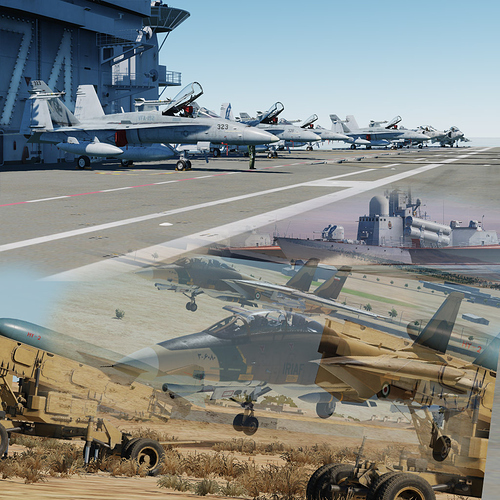 Red has had enough of Blue’s Operation Southern Watch! They have closed down the Strait of Hormuz and trapped the Abraham Lincoln, Independence, and Tarawa in the Persian Gulf. Blue must secure passage through the strait and get the carrier group to safety in the Gulf of Oman! 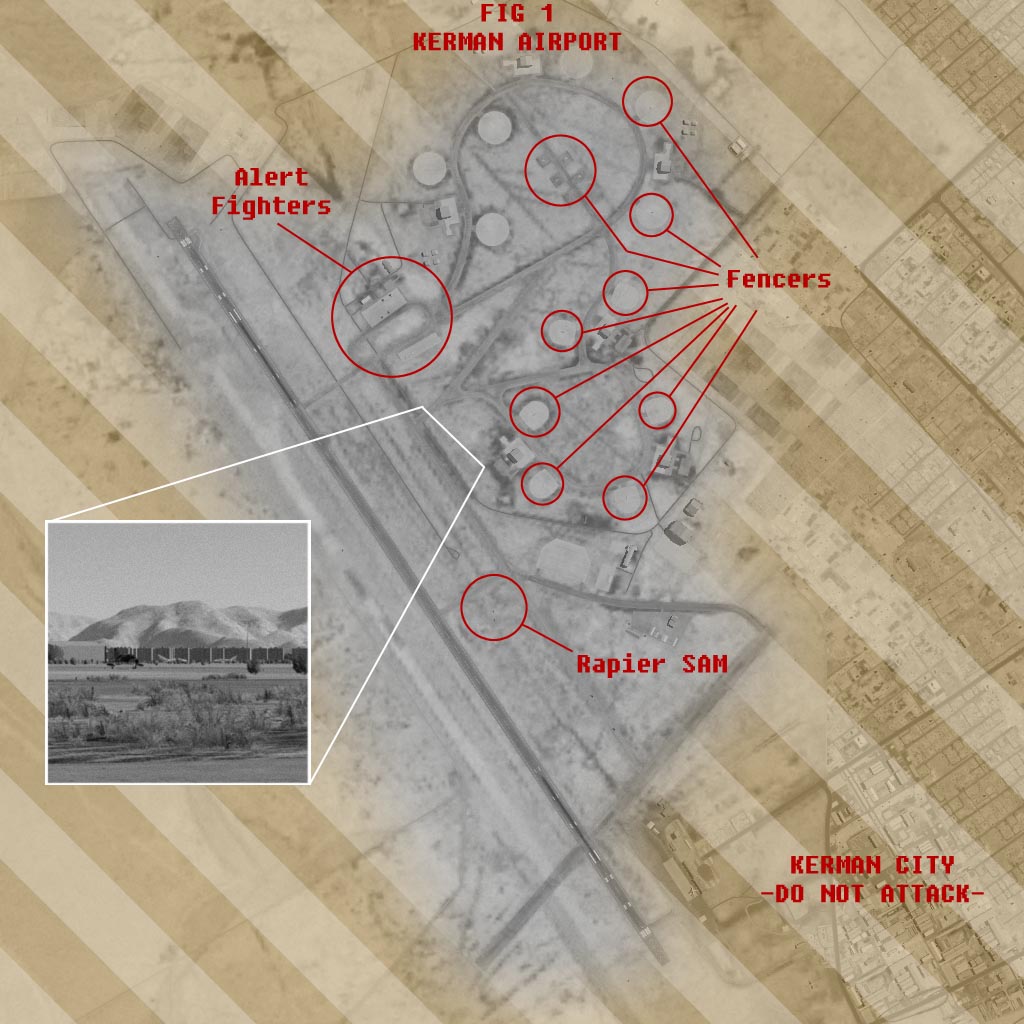 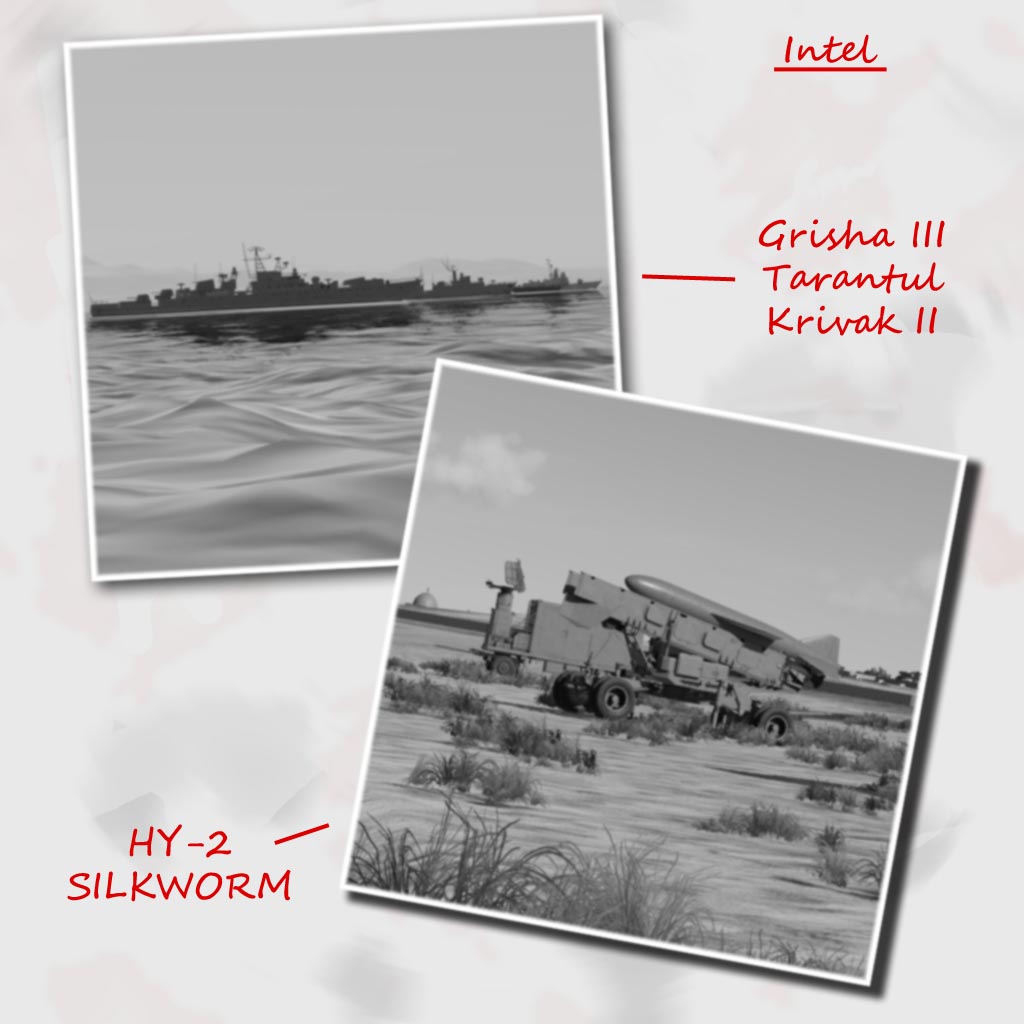 Three primary threats must be destroyed: 8 Su-24s at Kerman airport, 5 hostile corvettes in the Strait of Hormuz, and a convoy of Silkworms heading to the coast. Threats are variable between Hawk, SA-2, SA-6, Rapier, and MANPADS ADA, as well as various fighter patrols consisting primarily of F-4s and F-5s, with some F-14s and MiG-29s. The mission is successful when the primary objectives are destroyed or if the carrier group makes it to the Gulf of Oman without losing any of the three carriers.

This is a cooperative/PvE mission intended for anywhere between 4 and 16 players (there are a total of 46 playable slots). The primary intent was to have a more relaxed mission for the new Supercarrier module, but there are slots on the old Stennis as well as the Tarawa and land bases. AI assistance is available to help achieve the primary objectives, though they will by no means complete everything by themselves (and there will be some variability on their success, depending on how the mission plays out). It is not a short mission as the overall flight distance is anywhere from 200nmi to 800nmi, depending on chosen objectives and airframe. Available aircraft are F-14s, F-15s, F-16s, F/A-18s, A-10A/Cs, AV-8s, Mirage 2000s, Gazelles and UH-1s (note: helicopters have a smaller secondary objective to achieve).

Gonna need a relief tube in my chair!!!

Gonna need a relief tube in my chair!!!

Or you achieve all the destruction objectives prior to that point.

The mission is open ended so if you want to do something like take an A-10C up and destroy a few boats, that will only take about ~30min. Could probably do the same with the Bug and Harpoon. A thing I even did was take an F-15C and follow the strike package in, doing a one-jet fighter sweep of the area.

This looks AWESOME. I got a 3 day weekend coming up too!
Thank You for sharing @Franze

We flew this the other night and the consensus was that it’s an awesome mission. We’re planning to run this mission as an all-day mission the next time the VAF hosts a public server.

I just have one bug report, and it’s definitely ED/AI behavior (but may be fixable). We enabled the AI, and they proceeded to clog up the carrier. We had an S-3 on Cat 2 and a F/A-18 on Cat 3 that went into tension and just wouldn’t budge, and pretty much stayed that way for the entire mission. We could land at Ras al Khaimah as a workaround, but I wanted to let you know of this behavior. The mission was saved in the latest version of DCS.

Thanks for the report! Was this at the start of the mission or mid way?

Pretty close to the start. It had already occurred when I spawned in (and my flight was delayed by about 5-8 minutes, likely due to the carrier shenanigans).

I’ll take a look, I might need to set them to an air start for a temp fix.

In single player it works OK, so I might need to see if the behavior is different on a server.

ETA: I tried it on HPN and saw no issues, so I’m not sure what might be going on. Were there a lot of players on the deck?

I’ll try to get someone who was on deck when it happened to post.

From someone who saw it from the start:

First group spawned and launched except for the S-3 immediately after loading in. F-18 on cat 3 spawned and didn’t move. Deck crew semi-catawompus. Don’t know what mods were made.

Note: the mission was modded, but AFAIK only to add a special waypoint to the Tomcat to display bullseye.

I know in the Earnest Resolve campaign, the player’s wingman at one point wouldn’t take off because a CH-53 landed (even though it wasn’t in the path of the cat). I’m thinking there may be something to having too many birds spawn on deck at once that causes this issue in MP. MP can be a weird bird when compared to SP.

I can try a late activation of the F/A-18 escorts, having two more cats free might correct it. I may also edit them to begin with as the escorts have a tendency to fly around in full burner while stalling to keep their pace with the E-2.

Ah yes, the AI always literally behind the power curve.

but AFAIK only to add a special waypoint to the Tomcat to display bullseye.

Per the mission in the thread: I haven’t forgotten about it, but I thought I’d wait to make all the major updates until after the F-14A hits, since I’ll be replacing a couple slots in the scenario with F-14As.

Fix point should be fine. Really, any of those points other than Hostile Area (which cannot be selected as a nav point). Just something to mention in the brief (e.g. FP is Bullseye).

Big thing with the Tomcat is that it only holds 3 nav points and home base (which is automatic), so if you have a long route Jester will only load the first 3 points and HB. All waypoint lat/longs show up in the kneeboard for human RIOs to input as required, but if you can use things like IP, Surface Target, etc. Jester will input those. Also, I recommend starting all tomcats with stored heading selected; just makes the preflight less painful by the tune of about 4 minutes.

BTW, special waypoints are input just like using custom ABRIS points in the Ka-50. On the airplane group, select the Custom Target Points tab (the square icon on the right panel), enter them, and name them FP, IP, ST, HA or DP.

Good to know! Stored heading should be selected for all slots by default as I normally do that to keep the F-14s on par with the Bugs for at least the initial run.

Using the additional points isn’t something I do a lot in the aircraft (I typically keep them open and then use F10 map to tell Chester to put them in for various things mid-mission), so if there’s any recommendations on where/how to input those by default, please share!

We ended up doing IP, ST, and FP for the IP, ST and egress points in the Osirak mission so that the tomcat could keep up with the longer flight plan. That’s the only real waypoint recommendation I have thus far.

I was hoping that the F-14A would hit and allow me to add/change some slots for this mission and a couple others, but since that has been pushed to the 18th, I’m updating this one due to a small glitch with the weapon restriction script.