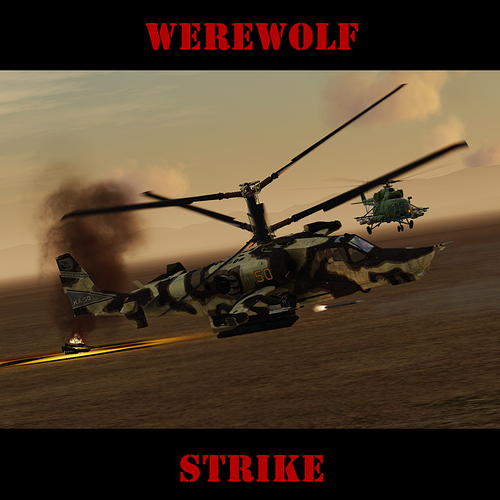 General Sarukh, with the backing of the CIA has staged a coup in the peaceful nation of Dessertland! With Sarukh threatening the region with war and terror, only an elite team of Russian helicopter pilots stand in his way!

This mission is based on the old Desert Strike game, except from a Russian point of view. A cooperative/PvE mission, it is intended for 4-16 (39 slots available) players, with an AI assistance option. Almost all helicopters start on ships, with some slots on the Supercarrier Kuznetsov and some on the old one, as well as various starting positions on cruisers and destroyers. It has some fixed wing slots, but these will definitely up the difficulty if used. All the critical objectives can be achieved by Ka-50s alone, but some need Mi-8s or UH-1s for personnel movement. MANPADS are featured throughout as well as various SHORAD, so it’s not a pure cakewalk. The mission times out after 6 hours.

You have been productive! I like the sound of this one a lot. Does anybody want to group up to fly this one some day soon?

Yes, I am overdue to fly it & have to learn as I go so solo is not ideal! (Not a helo pilot)

You have been productive!

I decided to dump a bunch of the missions I’ve been working on for the Gulf due to a few recent bug fixes as well as the fact I feel these missions are better suited to smaller groups in a PvE environment.

alright! Maybe we can put it on HPN some time?