Enjoy this presentation (not mine!) looking at various stores configurations under heavy G load in the F-16.

Shouldn’t CAT III limit the plane to 6G only, or am I mistaken? Seems like in the last test he overstressed the airframe even while flying Cat III…

The purpose of CAT III is to prevent departure when in a CAT III configuration…it does not limit G. It reduces things like roll rate and AoA but you can still pull 9G if you like. Very unlikely the wings would fall off but if it gets people to observe limits in MP then okay I guess. 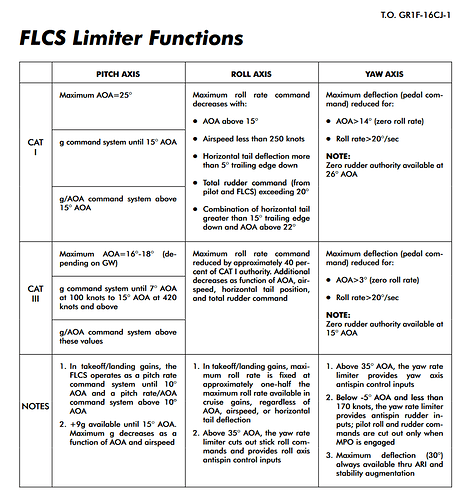 Ah, thanks for the explanation. Much clearer now!

You will likely be met on the flight deck by the Maintenance Department Master Chief…well the aircraft will be met by the Master Chief. After giving you a single cold glare, he’ll be examining the jet.

You will be met in the Ready Room by the SDO (Squadron Duty Officer) who will tell you that, “The Skipper said to report to his stateroom right away…he’s really pissed.”

Your subsequent “conversation” with the CO will be loud and one way. You will remain standing through out it.

On return to the Ready Room for a cup of coffee, you will notice that somebody has taped over your callsign on your coffee mug and printed, “G-man” or “Wing Bender” or some other appropriate witticism in its place. (Note: If you loudly curse and rip off the tape, the new callsign will stick like epoxy. If you say nothing and quietly remove it after a few days, your original callsign will survive.)

I always picture James Tolkan (the CO from the Top Gun movie) as he screams “that’s not your plane, but the tax payers’ plane!” at the pilot, along with a few choice words about the pilot’s presumed heritage that are not suitable for TV.

Their heritage, their mental acuity, their future career prospects or lack thereof…yep.

That would be awesome!

Outside of “war ops” is it a very very infrequent event or does it happen more than we would think? I’ve always wondered what happens when planes get bent by pilot error and how often it occurs

I always picture James Tolkan (the CO from the Top Gun movie) as he screams “that’s not your plane, but the tax payers’ plane!” at the pilot, along with a few choice words about the pilot’s presumed heritage that are not suitable for TV. 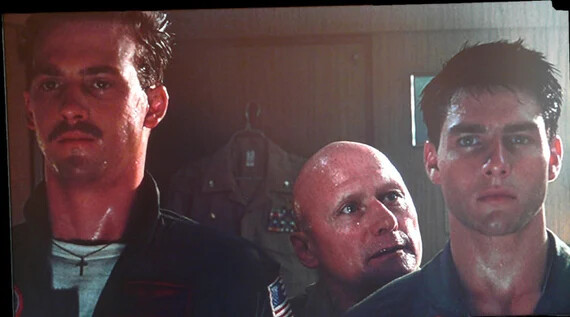 The F-14A had something called “torque tubes” that had something to do with the…I want to say, wings. Anyway, they would bend under certain stress conditions and I think that was not all that uncommon - but not career ending by a long shot.

We had a guy on deployment who had a “partial ramp strike” - one of his main mounts touched down just short of the flight deck. Some damage and they sent him back to the US to re-qualify carrier landings.

Another guy took a cat shot with his parking brake on (he swore it wasn’t) and blew both main mount tires. He got to land last since the metal rims might cut an arresting gear cable. It was a louder trap (as heard from just below the flight deck where we lived and worked) but all it really earned him was a temporary callsign “Boom Boom”.

We had a jet have to take the barricade - fuel issue not pilot issue. The jet was down for a while since wings tend to get bent and antennas ripped off by the barricade.

Our sister squadron had a jet overrun the runway at NAS Roosy Roads - pilot was upset and threw his helmet to the ground…probably broke it. The jet looked OK - just a lot of mud. He might have gotten in trouble for the broken helmet.

Our squadron had a jet get a weird electro-mechanical problem that, after landing, caused it to go off the left side of one of the runways at Nellis AFB. It went “dune buggying” across the desert between the runways…and across the parallel runway to end up off that runway too. That would have trashed an F-16 but the F-14 “Grumman Tank” took it in stride. They fixed the initial problem, checked for FOD damage and it was flying the next day.

We did put one into the water; crew ejected safely. But that was a bad cat shot so the ship’s fault - a petty officer miss-checked the launch bar in the shuttle…yeah, probably a career ending issue for that guy.

During my time aboard CV-67, LPH-9 and CVN-74, I saw (…counting) about 6 accidents that damaged aircraft or put them in the water, where the aircrew survived to face consequences, if any. Thinking only one where there were serious pilot error ramifications.

There were 5 other crashes where the aircrew (17 total) did not survive. Of those…4 were pilot error with weather being a contributing factor in two. The fifth we will never know - just never came back.

All of this was outside of war ops. So…(thinking)…probably minor plane damage due to pilot error is less frequent but major accidents are more frequent than one might think…at least they were regretfully more than I thought they would be.

Sorry for the stream of conciseness answer. It was a thought provoking question.

Thanks for your insights!

Just from listening to the Fighter Pilot Podcast, I get the impression that over-g-ing an airplane is something that most fighter pilots have done once or twice. When the topic comes up, the answer always seems to be “of course not” with a wink and a smile… or whatever the podcast equivalent of that answer is…

The damage model -systems failures- seems a good place for this; bend the jet and lotsa lights turn on/flash, with some annoying noises to go along with it. The Tomcat wings used to snap off, or so I hear

I’ve not had any luck with the “Failures” tab, at least for Clients. Not sure it works for MP but been a long time since I tried it. Time to look again.

Maybe change the splash screen (the “Fly” menu/window) background to something appropriate, at least for several days? Associated with a pilot profile perhaps.

The Tomcat wings used to snap off

They still do, don’t they @Freak

The F-14A had something called “torque tubes” that had something to do with the…I want to say, wings. Anyway, they would bend under certain stress conditions and I think that was not all that uncommon - but not career ending by a long shot.

They still do, don’t they

That is fair enough I think.

Sometime after WWII fighter structures started being designed with a concept of “Design to Fail” which keeps the weight and cost of the structure down.

This means that if you fly something that can exceed what is termed the “Ultimate Load Limit” then structural failure and loss of aircraft is expected. The Ultimate Load limit in terms of G is a variable and depends.

There are 2 reasons why I don’t think an F-16s wings would fall off like in the video. The reason that is easier to explain, is that the wing attachment points are designed to fail before the wing.

Some pilots might prefer to see the pylons fall off…rather than the entire wing with intact pylons.

Confirmed last night during load testing. The load testing was commenced due to frustration of not being able to catch a wire on the supercarrier if you don’t own it