In an effort to help new Jug pilots, or those whom are intimidated by its somewhat complex engine management enough to give this fine aircraft a pass, I’ve started this topic as a resource for both sharing reference material and experiences learned by those flying the sim. Please add your best practices.

Disclaimer: I’m far from an expert and still learning how best to employ the DCS Jug. Furthermore, the P-47D is still in early release and subject to modification and refinement by the developer.

New Jug Pilots
There are a lot of engine management controls in a P-47D. But you can set it up with a basic configuration and not have much to manage while you are getting comfortable in the airplane. Set mixture Auto Rich, RPM to 2550, throttle/boost latched, oil and intercooler shutters to neutral (50%), and have control mapped for cowl flaps. Take off like this and once you are above 200 mph, close the cowl flaps. Using the throttle as desired, keeping manifold pressure around 45 inches except takeoff and combat.

Advanced
Map controls for unlatching throttle and boost levers, controls for opening and closing oil and intercooler shutters, and a button for toggling water-methanol injection.

Even though you can use boost at low altitudes, since the supercharger is gear driven, you loose up to 300 horsepower engaging the turbosupercharger. This more or less negates the gained higher manifold pressure. As altitude increases, the mechanical disadvantage lessons.

Golden rule: to avoid damaging your engine, never advance your boost lever further than your throttle. Again, this is not as bad as it sounds, because at typical medium to high altitudes where you will want to fight in the Jug, you will have already your throttle to the wall, and will be adjusting your manifold pressure with the boost lever. So, unless you are Arnold Schwarzenegger and shove the boost lever through the instrument panel, you won’t be able to advance the boost lever past the throttle. You can over boost your supercharger (18,250 or 22,000 RPM depending on the model), but that is usually a rare condition.

Video explaining this in greater detail. I have not tested it in the DCS. It does behave this way in IL2 GB. …which is part of a series of P-47 related videos.

In typical combat, I have the prop and throttle pushed to the wall, intercooler on neutral, oil at between 50 and 70% open, cowl flaps closed, and regulating manifold pressure with the boost lever.

Trim is also important, and I find myself adjusting rudder trim more than with other aircraft. So have it mapped on my stick.

In typical combat, I have the prop and throttle pushed to the wall, intercooler on neutral, oil at between 50 and 70% open, cowl flaps closed, and regulating manifold pressure with the boost lever.

Trim is also important, and I find myself adjusting rudder trim more than with other aircraft. So have it mapped on my stick.

This is a good refresher. I have not been flying for a hot minute. This really helped a lot. The most important things to take away from this are, the Boost control is your “throttle” and RUDDER TRIM is your friend.

since the supercharger is gear driven 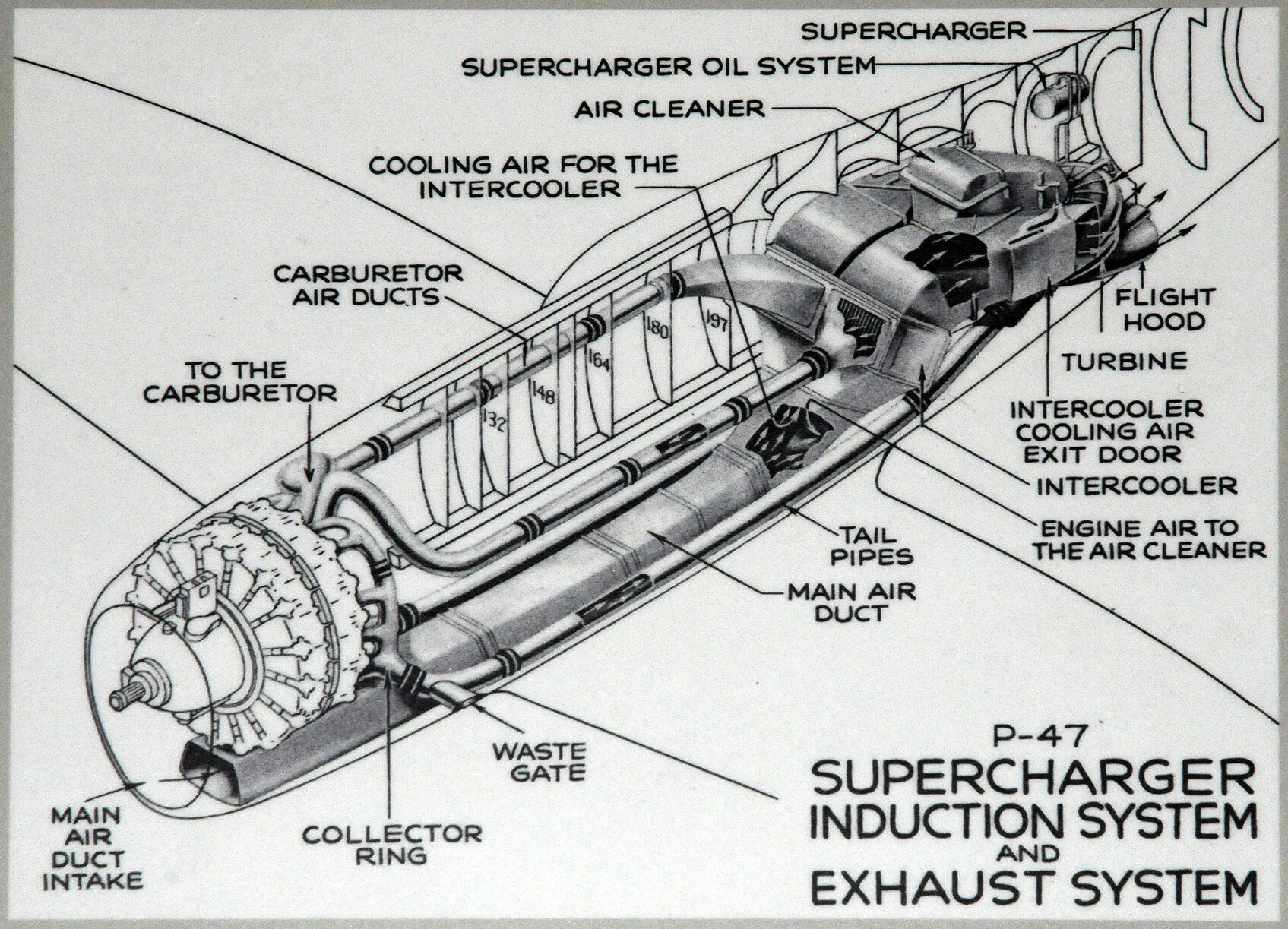 A friend and I were struggling with the coop Wolfpack mission I flew earlier. Here’s what we deduced.

But may the gods forgive you should you fail to lock the primer.

Hmmm. Sounds like the DCS P-47 was built in England…

Is this actually the case?

I’m going by the Greg videos which state that it has both an exhaust driven turbocharger and a gear driven supercharger. He also goes into a lot on the history and philosophy of both. But, Rather than rely on that one source, I’ll try to find an explanation in the pilot’s operating manual. It deserves critical analysis to be sure. Edit: see page 12 of the AAF Pilot Training Manual for description and operation.

Same with the oil cooler.
Do as you wish with the cowl flaps.

Maybe I’m running mine harder in other settings (rpm?), but if I start a fight with oil shutters set to neutral, at least at medium altitude, I can get the oil temps over redline in a few minutes. The intercooler seems fine. As far as cowl flaps, IME they have substantial drag. But it’s good to hear a contrasting opinion. That’s what this thread is about. Now I want to test to see if my initial impressions match actual performance. Would not be the first time that my imagination incorrectly persuaded my decision making.

I was trying to be a little bit tongue in cheek. The engine management stuff will matter eventually in the flight. But what we were struggling with were engine failures fairly early in the initial climb out. That’s because in our rush to fly we weren’t locking our primers. But I have flown for hours at altitude before I ever knew about the intercooler and oil settings. By dumb luck, it seems that leaving them at their initial settings is generally survivable on a cool day without too much idling on the ground.

Wes, if you download the AAF Pilot Training Manual, which I’ve just linked in my original post, page 12 describes the two systems. It calls them both superchargers, the gear driven one an integral part of the engine, and another installed just forward of the tail section.

I see that now, thanks!

Really doesn’t help that they also throw both terms around to refer to the turbine even within that document. Gladly today they aren’t talked about as such in cars…

Gladly today they aren’t talked about as such in cars…

For sure. Clearly the one near the tail is a turbocharger by modern definition. What I’d like to know is if the boost lever controls just the waste gates at the bottom of the engine cowling or also mechanically linked to the supercharger on the engine.

I would think just wastegate control, it is implied on the next page to the one you referenced. I would think supercharger control would be a lot more complicated to make it variable - hence why other engines had single or two speed systems.

I once owned an old book (early 60’s maybe) called “Aerospace Propulsion Powerplants”. It was thick with a green cover and was filled with geek gold. If you run across a copy on ebay or a yard-sale, pay any price you can afford for it. It has probably 100 pages on P&W variants and the engineering behind their complexity.

Found it on Amazon. At 677 pages, it’s doubtful that I would read it cover to cover. But I feel like buying it and leaving it on the bedside table, just so my wife understands the importance of us one day owning an airplane

Or perhaps, that will raise all kind of alarms.

Thanks a bunch for writing this up! Below was just what I was looking for in terms of getting my feet wet.

New Jug Pilots
There are a lot of engine management controls in a P-47D. But you can set it up with a basic configuration and not have much to manage while you are getting comfortable in the airplane. Set mixture Auto Rich, RPM to 2550, throttle/boost latched, oil and intercooler shutters to neutral (50%), and have control mapped for cowl flaps. Take off like this and once you are above 200 mph, close the cowl flaps. Using the throttle as desired, keeping manifold pressure around 45 inches except takeoff and combat.

I read this response in the ED forum by Greg of Reflected concerning the challenge of keeping up with climbing AI in the Wolf Pack campaign.

“AI climb speeds are hard coded ,and it’s not easy to keep up - see my playthrough video on youtube. Don’t be afraid to use 2550 rpm and 52". As long as you manage the temperatures with the intercooler and oil cooler you should be fine. Also, trim your aircraft perfectly, and fly clean.”

Chiming in on this because Greg’s video and all the gaps in our manuals confused the hell out of me on this:

Max performance takeoff is 52"; everything says boost isn’t necessary under 7,000ft or so (that I recall). However, you will not get 52" on takeoff unless you use both throttle and boost. Max throttle on takeoff will only give 45~47" depending on weather/altitude.

Also bearing damage is very sensitive. You can overspeed the prop on a power-off dive, so apparently always keep power on (despite period training videos saying you should be power off). One rule of thumb I’ve read to keep radials happy is to knock off the last two digits of your RPM, and never go below that value in MP. Ex.: 2500rpm = min 25" MP.

What speed are you guys landing at, 150knots seems the sweet spot for me but that seems a tad fast

It must be my technique, I bounce at 120

I am thoroughly enjoying the sink the sub mission for it. Those scnellboots escorting it can sting quite badly 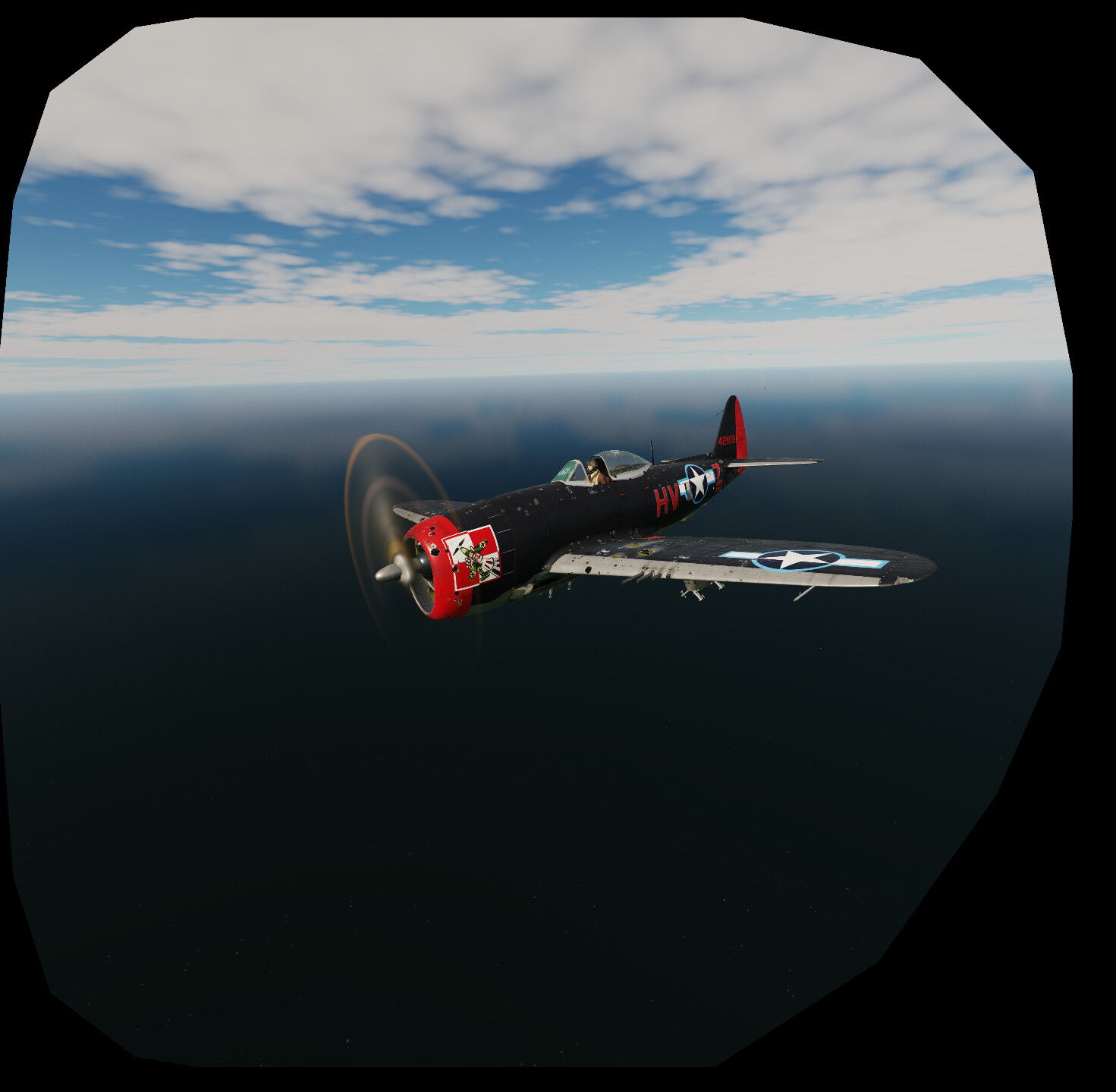 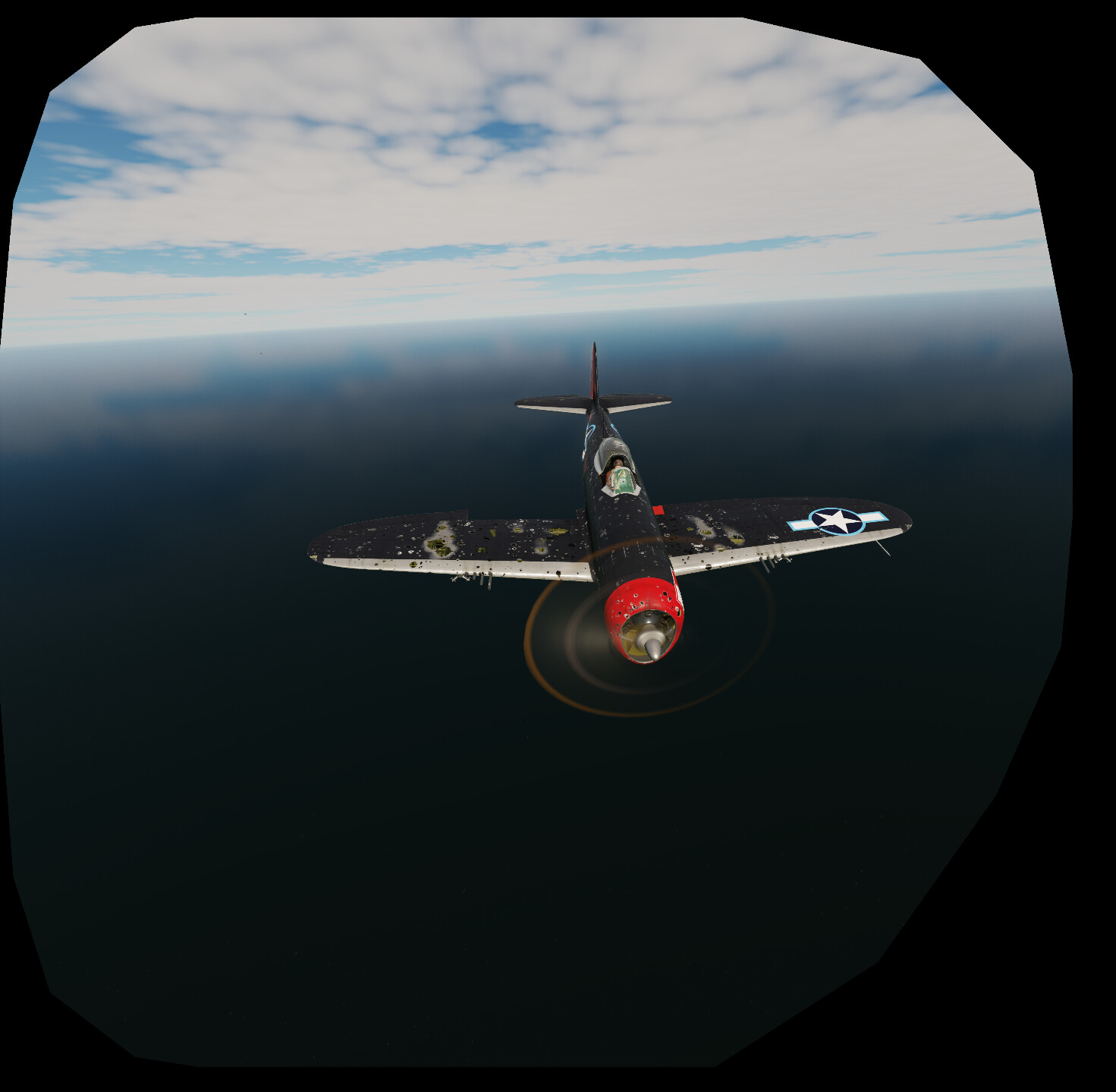 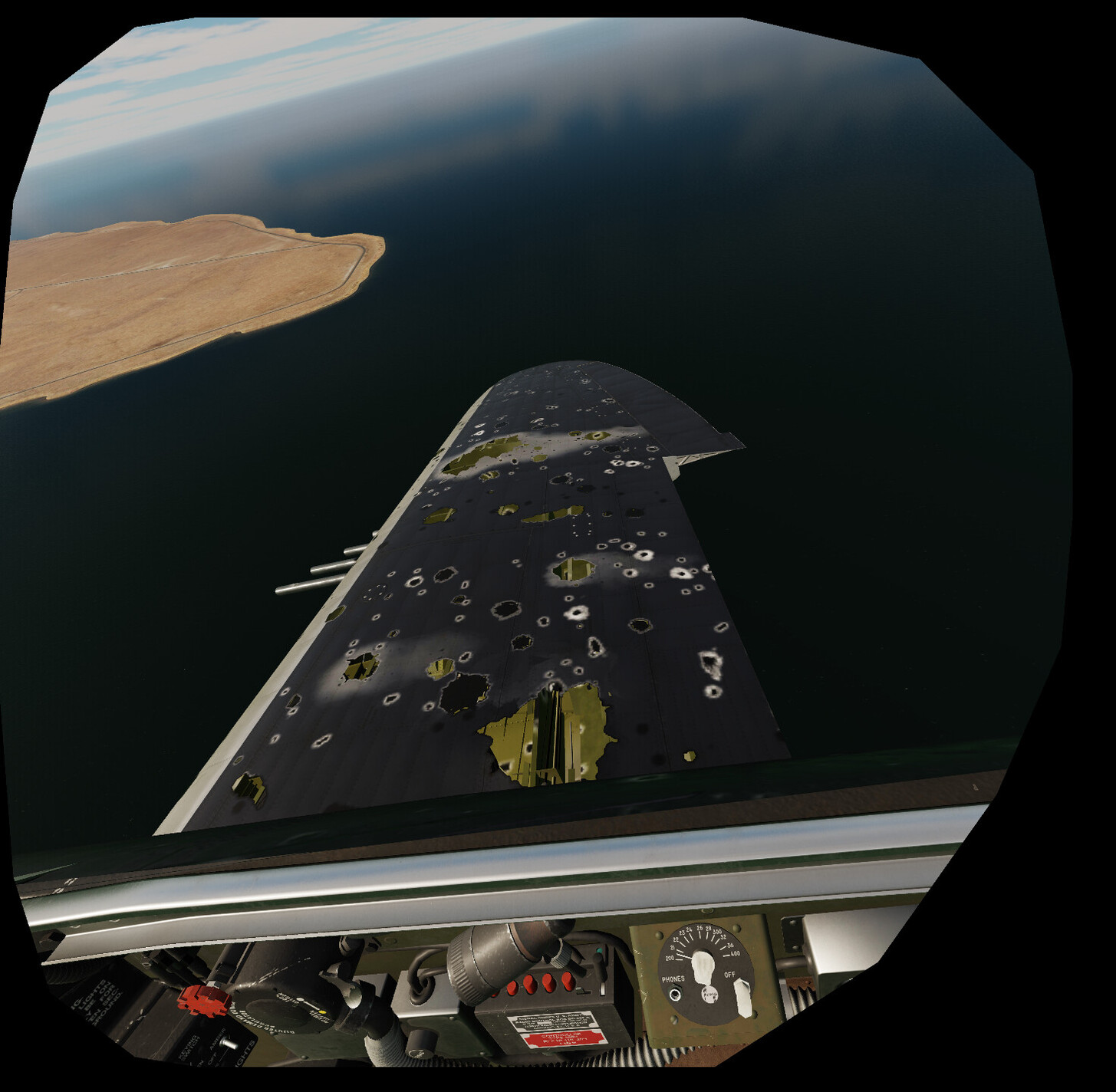 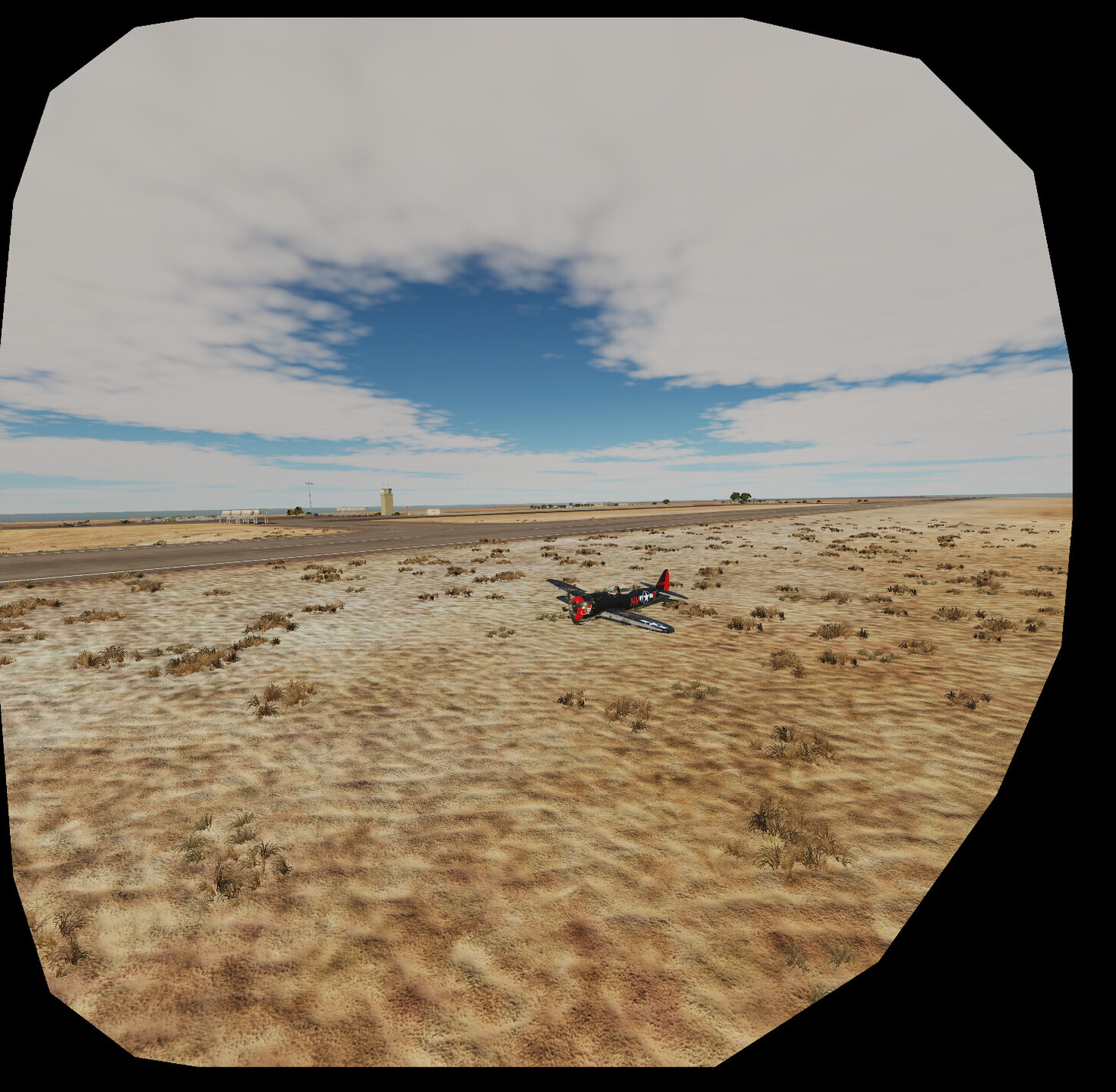 PS need a better way to do screenshots in VR