The Yakovlev Yak-52 is a Soviet military trainer that fits nicely into the hierarchy of DCS World. Fully aerobatic with high G-limits and a snappy roll rate, the Yak-52 is a great choice for both initial training and advanced maneuvers. Light Background First flown in the mid 70s, the Yak-52 is powered by a 360hp…

Does it drop or shoot things that go BOOM?

He can still bail out, though.

And no, the version we have is completely unarmed.

He can still bail out, though.

That is soooo wrong! You destroy a few Viggen and you are labeled for life! “Hangar200…The AJS-Annihilator”!

My innner child is weeping.

You destroy a few Viggen

Oh! I’m sorry!
I thought this was some sort of sport for you…

I think I’ll pick this one up this winter, just because I like quirky Russian aircraft. Granted, it’s no IL-2 or IL-10, but I like the subject matter.

Yes. I would absolutely love for a bit of a role-playing element to DCS World with a more robust rank system, squadrons you carry with you through campaigns and single missions, and other little things to liven up the game and make one feel invested in their character. You read the request here first - Eagle Dynamics Loot Boxes with custom aviator scarves!

Let’s get a career system in place before loot boxes!

I want to manage my pilot’s thirst, hunger, and rest.

It’s worth mentioning here that there has been some work on creating a full English cockpit mod for the Yak. Still a WIP since the module is in early access, but Quatermaster has done a nice job:

The physics of the ADI make changing it impossible though unless an alternate physics code is written for it:

“Before you ask, I cannot change the “upside down colors” on the attitude ball - it is the exact same type of ADI ball as the Saber uses, its a simple, cheap “wet” ball, so the fact that the colors are “inverted” as you view the ball is intentional, and by design, I cannot do anything to alter that, you must learn to fly that instrument as-is, sorry not sorry.”

Why would they change the ADI anyway? It doesn’t make sense to change a system behaviour.

Why would they change the ADI anyway? It doesn’t make sense to change a system behaviour.

Because people retrofit cockpits all the time? Case in point…our King Air…where I don’t think they left a single system intact! 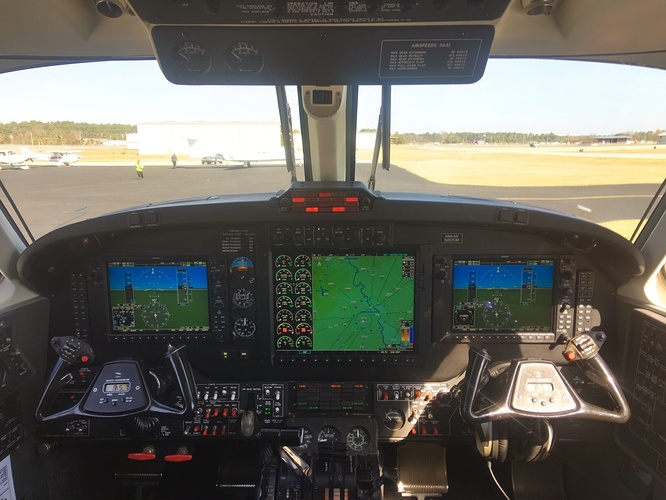 I’m with you on the non-EFIS ADI. I’m not really a fan of glass cockpits. Prefer steam gauges. Speaking of gauges I believe that you have to switch the ARK-15 into radio compass mode for the RMI guage to work. You might also need to press the button to the right of it to make sure that the panel in whichever cockpit, front or back, that you are in is controlling the ADF unit.

@BeachAV8R Have you tried out Flight 1’s Super King Air B200 Blackhawk for FSX/P3D? If so, what did you think of it?

Have you tried out Flight 1’s Super King Air B200 Blackhawk for FSX/P3D? If so, what did you think of it?

I like it. I think the underlying code is based on the original Aeroworx B200 v2, but I’m not 100% sure of that, so take that with a grain of salt. The G1000 panel definitely is a bit of a resource drainer…so I do find it isn’t quite as smooth as the older models, but it also looks better and the whole world looks better (P3D v4). Their modeling of the G1000 is fantastic though…and you can’t ask for much more depth than what that module offers. At this point though, I’m a 90% X-Plane guy so, sadly, I fly P3D and FSX less and less…