So I bought the Hind and thought I’d set up the PC to give it a whirl…I had my flight sim PC put away for a while with the new baby taking up all my time.

I tried out starting up with my old GPU and it worked…so the issue was the 1080Ti. The only valuable part in the old computer, lol.

I just started looking for an explanation and I think I found the culprit. 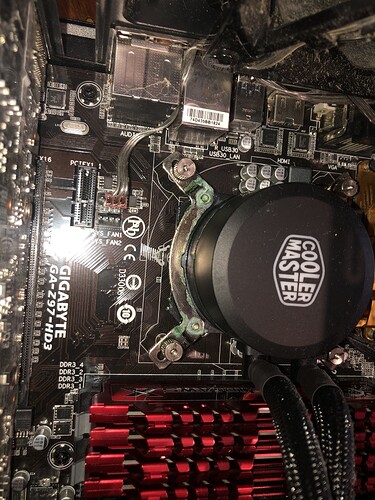 That’s the AIO CPU cooler and next to it is evidence of cooling liquid that’s not inside the thingy. I’m no expert but I’m pretty sure I was never meant to see that liquid because it was supposed to stay inside the thingy. 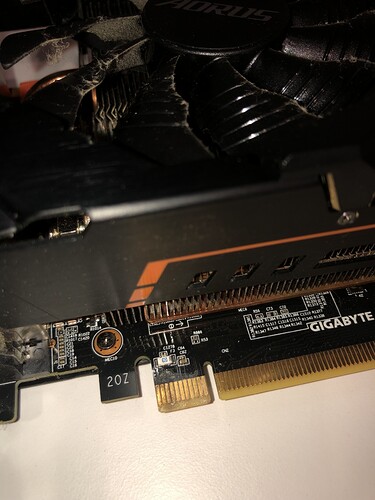 And that’s downhill from the leak. I guess that would do the trick.

Would I be right in assuming that GPU is now almost certainly only worth its weight in copper cooling pipes?

Rest in peace to that old awesome card

You could try checking your coolermaster warranty. Some of those cooler manufacturers warranty extends so far that they will replace components damaged by their leaking fluids (on the provision of absence of abuse/mishandling etc.) It was the reason I went with Corsair. If the leak was still fresh (maybe it happened when you moved it) you could try to put it somewhere warm (maybe put something that absorbs water over it, like rice). and hope that the liquid will evaporate. But if the thing has properly shorted already I’m afraid its value has been reduced to just its rare metals.

I have decided that I am going to get into the hardware business. My first product will be the Badonkadonk Motherboard Sump-Pump (with optional float alarm - 85db!)…

Could it be condensation from the cooler block…?

It has a colour and feel on my finger of something else than just water, so it seems likely it is from inside the block.

Anyway, I think I’ll be reading your “building a new PC” thread closely!

I thought maybe the color could be from the copper plate… But you will probably notice if liquid is missing from the loop, when you dismantle it.

Edit. Nah. Googling the issue seems to rule that out. The cooler plate is warm enough to evaporate any moisture there.

Try cleaning the contacts on the 1080 with some water or preferably alcohol (don’t use any organic solvent like benzine or petroleum ether!). If you are very lucky, there’s just enough of a short between a few of these pins to throw the PCIe bus off (high frequency digital communication is very sensitive to parasitic currents).

And definitely get rid of that cooling loop. 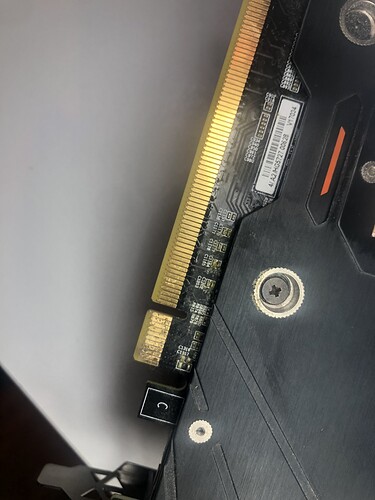 The other side is even worse.

I’m going find out if I could put it on the home & contents insurance as the next step, actually - unsure if it’s covered but might as well try. A friend of mine succeeded but this was in Finland so the policies might be different.

Those smd components do look pretty bad on that side.

The other side is even worse. Take the cover off and make sure the damage is only present on the PCI slots. As sobek says clean it off moisture on a unplugged pc should only corrode not short out

Well, I’ve got the PC inspected for an insurance claim. Took the PC and the GPU for their last adventure out to West Auckland to a computer repair guy to check things out. The guy confirmed our assessment, unsurprisingly.

See how it goes…worst case, I get nothing and spent $60 on the inspection, best case I get my full claim (dead parts + still working parts that have had water exposure)…most likely case, I’ll get something but they’ll calculate some kind of depreciated value based on purchase date rather than use current replacement value. Still, if I get something I’ll be happy - goes in the tin towards the new PC.

Yeah…was about to say…based on current valuations, you might make money on that graphics card…

I know, I hope they have an input in the formula for current value…that would be handy lol.

But I remember trying replacing some sunnies on insurance years ago and it basically didn’t work because they had an aggressive depreciation formula applied. By the time you removed excess and depreciation, there was nothing left to claim. I guess sunnies have a formula like that so people don’t just stomp on their scratched Serengetis every 2 years for a new pair, haha.

So…I just got the accepted claim report back, it’s about to be paid out to me today.

They took their time interpreting their policy, but basically in the end took the view that it’s “a custom computer” (I.e. one piece of equipment rather than individual components - like it was a laptop or whatever).

They will not reimburse the cooler, as that was the part causing the damage (okay…unsure how that works but whatever) but they will pay out the replacement cost of an equivalent computer apart from that. GPU, PSU, mobo, RAM, SSDs, the lot, based on a quote from a retail electronics chain.

Suffice to say that amount ended up being a decent subsidy towards the new PC, it basically pays for 90% of the 3090. That’s a windfall I didn’t expect! Basically makes the completely outrageously costly PC purchase to only somewhat outrageously costly, which in 2021 isn’t a bad result.

+1 for insured water cooling, I guess…

That’s a windfall I didn’t expect!

The trouble is you might find your insurance renewal for next year is mysteriously up by the same amount.

@fearlessfrog Hehe - yes. Typically you do get a few isolated claims before you go “up a slot” in premiums, from what I understand (we haven’t made any contents claims since a cracked bathroom basin 8-9 years ago, so hopefully we have a bit of leeway).