From the article in the OP:

After the worst year in history for unruly airline passengers, Delta’s CEO is asking the Department of Justice to help create a national “no-fly” list for anyone convicted of federal offenses related to an on-board disruption.

It sounds to me as the Delta CEO is proposing a list of people convicted of the federal offence of an on board disruption, not a list that the airlines can just make up…

That’s what I get for not fully reading the article.

Ah! I see. I just couldn‘t understand what it was that I had missed…

Which is why this is more show-boating than a serious proposal. It puts Delta on map with a sensible leading position. But to any educated observer, the idea is vacuous. You can probably count on your hands and toes the number of FEDERAL convictions over airline disturbances in a given year. Cops come, they drag the tearful offender away, they take a report and (excepting the most violent infractions) they typically uncuff him so that he can get his bags and go home. Or rebook and fly home.

My airline had a very famous event a few years back where we “beat up a passenger”. We were raked over by late nite comics the world over. We were the poster-child of the sorry state of customer service in the US. We employees were traumatized and demoralized. But the truth was, it wasn’t us. It was an express carrier flying for us. And it wasn’t them! The passenger refused to move so the airport police were called. THEY manhandled the dude. It was totally out of our hands. But we were monsters and he was a hero. I can’t say more but dig deep and really learn about the people involved and you see how upside-down the world really is. Perception is often, maybe always, wrong.

I was a flight attendant for 10 years, 1979-1989, for Eastern Airlines, who at one point had more daily flights than any other US airline. Mostly, it was a great experience for someone in their 20’s, given the flight benefits, above average pay (at the time), and liberal social environment. It also gave me a pretty good insight into public behavior, that is when confined to a small space with easy access to alcohol.

It’s a thankless menial task, but someone has to do it. A-300 MIA-LAX probably mid 80s. 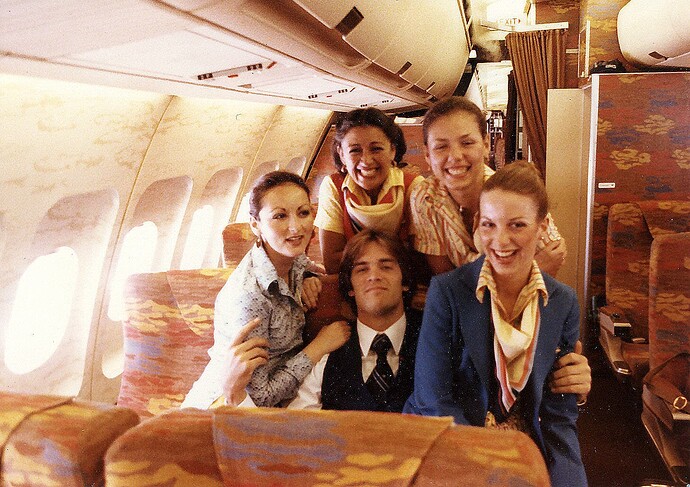 Prior to flying, I did 2 years active duty US Army Reserve, so you might say that I was subject to a change in working conditions in the extreme. When I tally my hours, not counting briefings, pre and post boarding duties, transfers, waiting for aircraft, but just the block to block time, it’s somewhere around 8,400. Hard to say exactly. I kept a written log for a long time, but due to deregulation and the company changing hands, working conditions changed a lot over the years. I have some thoughts on labor unions vs company management, having endured and reluctantly participated in a strike that eventually brought down the carrier. But that’s a rabbit hole for another day.

I got certified to fly the Senior position pretty early in my career in order to hold better trips. At least what I considered better trips. I was based in EWR for a year, MIA for three years, then ATL for the last six. Out of Atlanta, I flew probably 80% of the time either Salt Lake City, Los Angeles, or Portland trips. For instance, probably for 5 or 6 years, I kept my skis in the Salt Lake City Marriott luggage room. A typical trip would be work ATL-DEN-SLC, getting to the hotel about 9:45PM. Grab the ski bus which stopped in front of the hotel around 7:45 AM, ski Alta or Snowbird until about 3, catch the bus back to the Marriott, try to grab a few hours sleep, then take the hotel airport shuttle at around 9PM to work the night coach back SLC-DEN-ATL. Get home around 8:30AM, sleep a few hours, then do the same trip a couple of days later. Rinse-repeat for months at a time, with an occasional company forced diversion or trip swap to have specific days off. Replace SLC with PDX and LAX and I did this for quite a few years.

Back to the public. Just a few of the things that I witnessed in-flight:

There were many more incidents over ten years. These are just a few that come to mind.

And that kids, is why I could never be a pilot.
I’d have gone medieval on almost every one of those passenger.

I always had in my head you were a flight engineer @chipwich. Never realised you were on the front lines in the back!
Fantastic stories by the way. Love hearing about this stuff.

I can’t say enough good things about the front end crews that we had, flying in the worst weather in the Northeast during winter. Those guys could really fly. Once they heard I was working on my ratings, they would often just want to chat about flying and answer any questions that I had. In the rare occasion that the plane was empty, they would usually invite me to sit on the jump seat during landing.

When the company went on strike, I decided to go with what ALPA and the pilots did, reasoning that they had a lot more at stake financially, and as a group, probably a whole better educated than most of the other employees. In the end, the company closed it’s doors, leaving many of those guys job hunting in a deregulated, financially challenging times. Pan Am, National, Braniff, and others all suffered the same fate, more or less. When they got rehired, most of them were back at the bottom of the seniority list. It must have sucked. But they had their reasons, and for brevity sake, I’ll leave that to another discussion.

Priceless little summary, thanks!
Ever thought about writing a novel about that stuff?

@chipwich, that was a great read. Thanks! You got kicked in the teeth at the end. But while the good times were great, you were flying the Golden Age of domestic jet aviation. The cheshire cat grin is telling and priceless!