The Steam Hardware/Software survey is showing about 25% of people on a DX12 capable GPU and running Windows 10 so far. DirectX 12 requires Windows 10, and about 40% of users are running a DX12 capable card but still under Windows 7 or 8 (so using DX11 or lower, with DX9c still the majority of games out there).

There’s very few exclusive DX12 titles as yet, but the one getting the most notice is Ashes of Singularity:

The game is in early access, is a ‘mass unit RTS’ and is playable plus comes with a benchmark to compare DX11 and DX12 performance. There are still AMD vs Nvidia driver optimizations, but people are seeing about a 30% improvement in DX12 so far.

The main selling point of DX12 is the adoption of a reduced draw call approach, that is similar to how AMD pushed their ‘Mantle’ low abstraction API - basically a way to more easily get to the ‘metal’ of the card rather than how DX wants to see the world. This pushes more of the work onto the GPU away from the CPU. It also allows more cores to work in parallel with reduced thread overhead, finally getting us away from ‘clock speed is king’.

Square Enix also did a DX12 tech demo with Nvidia:

If a game is bottle-necked by the CPU then DX12 helps a lot, but it does require an architecture that is built around the concept of multithreading already, and a lot of our existing titles we play aren’t there yet.

another huge point is that DX12 can make dissimilair GPU’s work together. Needing two of the same for crossfire or SLi is a thing of the past. instead of replacing your GPU, you are merely adding more power to it by giving it a buddy.

and in case you’re wondering, yes. It’s possible to make an AMD GPU work together with an Nvidia GPU

can make dissimilair GPU’s work together

The multi-adapter approach on DX12 also works ok on the Intel (Bridge/Haswell plus) integrated graphics we get on modern Intel CPUs. As most of us don’t even use the integrated graphics part of our i5/i7’s, then it provides a relatively small but nice (and free!) throughput boost. 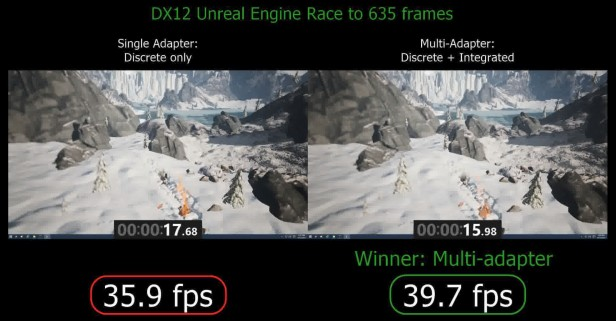