Do you default or tweak your NVidia settings?

In messing around with Falcon 4 and trying to get my MFDs a bit sharper (to no avail), I sort of started dabbling with some of the NVidia settings seeing if I could get something that might affect something in Falcon 4.

Traditionally, I’ve never messed much with the Control Panel settings, instead just letting whatever game settings take precedence. I’m wondering about some of the settings though such as Virtual Reality Pre-Rendered Frames and Variable Rate Super Sampling…are these things I should be working with? 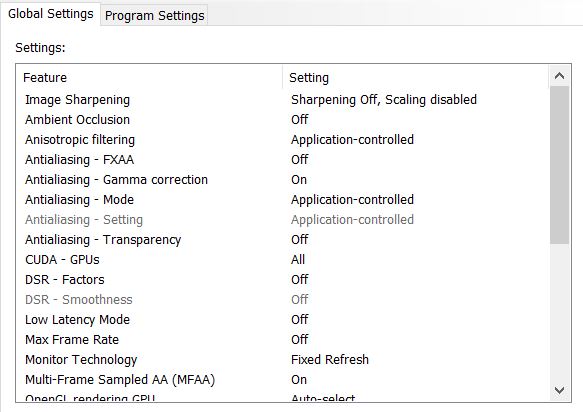 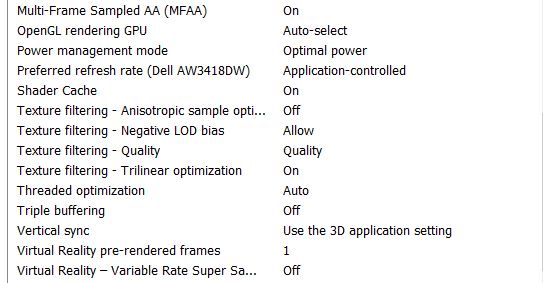 Check that “Power Management Mode” on Global settings and put it to “Prefer Maximum Performance”.

The default of optimal power when the driver is installed really caps the frame rates. I was flying with @Franze one day and our similarish rigs and flights on the same missions had him over 100FPS and I was stuck down at 60 max. Fixed that setting and we were as good as even.

Otherwise, I don’t change anything.

The default of optimal power when the driver is installed really caps the frame rates.

Oh dear…I’ve been flying with that at default all this time? Ooopsie…

Supposedly it’s supposed to allow the GPU to clock up under load, but from what I have read, in CPU limited games keeping it clock up with Max keeps things more stable. A suggestion was to use the game specific tab to set max performance for each game, and leave global to optimal power. That would likely best serve laptop users.

For DCS, at least in VR, nothing in nVidia CP concerning anti-aliasing did anything in DCS. My assumption was that AA should be better/faster if I had nVidia doing it; AA all On in nVidia CP, all off in DCS == shimmering mess. All off in n-CP, all on in DCS == looks good, just slower of course.

I am recently following what this guy has set: https://www.youtube.com/watch?v=ywGhE1vnRVA

Wow, totally forgot to do this last time. Thanks for the reminder

Otherwise though I leave everything at default, can’t think of an occasion where I felt the need to change anything in there for anything other than performance issues on the rare game.

LOL! Can’t tell you how many times I’ve made that quip. I’d forgotten what movie that came from

Same here, exactly, as of a few weeks ago; along with the VR mod (which may have contributed the most?) I gained about 15%. All was [mostly] Good.

Then 2.5.6 dropped and I’ve had to re-adjust. Maybe just some loose items in this release?

Oooh I have to try that with my 2070S.
I have everything on default right now.

The original GB was one of the top quotable films from the 80s.

“Ray, the next time someone asks you if you’re a god, you say YES!”

Whether or not the nvidia control panel can affect a given game depends on the game. In some, especially ones with limited options or lacking features like FSAA, the control panel can force those to be used. However, in many others, especially those with deferred rendering, the drivers are powerless to override what the game itself wants the card to do.

I tried that maximum power setting. Doesn’t seem to do anything. Maybe that’s not the bottleneck on my system after all.

Prior to 2.5.6, Optimum Power would cap me up to 60fps. However, like you’ve seen it’s affect varies by game and system.

I think it has to do with deferred shading, nothing I have ever tweaked in nvidia control panel made a noticeable difference.