Does anyone have 3 Thrustmaster MFDs functioning in Windows 10?

Has anyone tried using 3 x Thrustmaster MFDs with DCS? I’ve plugged in 3, but they seem to be hard coded to present themselves to Windows 10 as F16 MFD1 or F16 MFD2. When I connect the 3rd one it will also show up as one of those two. Windows sees them all and the buttons function. T.A.R.G.E.T, not so much. Will try and report back here. 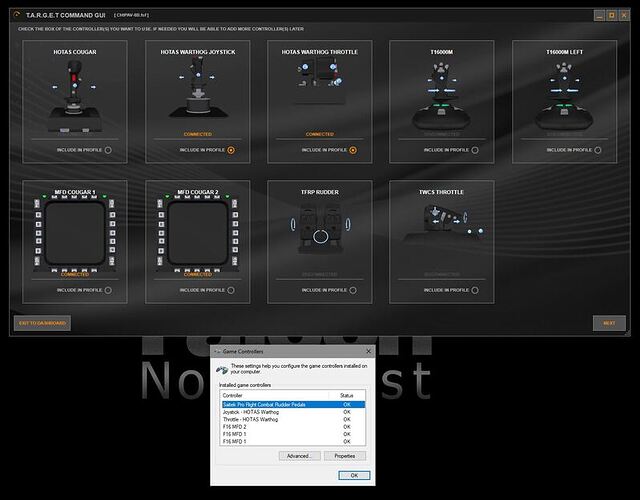 Has anyone tried this and does windows properly identify 3 separate devices? With the release of the Hornet I'm working on building a simpit that supports 3x MFDs. The problem though is I'm not sure if you can have 3 thrustmaster MFDs plugged into...

I put this in it’s own thread as there are likely other people interested who might not see it in the F/A-18C thread.

They come in pairs I think, so you might as well get all four running in some capacity.

I have 2 TM MFDs that has seen very little use. I did remove the stands on them, and I’m not sure I know where I put the stands, afterwards. I may be able to find the stand parts, but maybe not…

Belated thanks SZ. @Panther also mentions number reassignment with the latest TM drivers here. That works well. I wish that once you assign it a different number that the TM drivers rather than Windows drivers would still recognize it, but a minor quibble.

I generally use TARGET to create profiles, but since there are no default keyboard assignments for the DDIs and the AMPCD, it’s easier to leave them out of the TM profile and map them in DCS. Works perfectly.

Now, if someone can create an AMPCD export for Dummies guide, I’d throw it up an a USB monitor and lay the 3rd MFD over it. I’ve tried all of the threads at ED, but no joy so far. I think that I must be one .LUA short.

Pretty sure there’s a guide on the ED forums

3 MFDs work with an updated driver from Thrustmaster, after installing the latest driver you must restart the PC for the option to be available. Regarding Target, it currently doesn’t have the ability to set a third or even more MFDs. TM Devs are aware and have that on their to do list, ETA unknown but I can ping them if needed.

Regarding the AMPCD, I have zipped up my modded files, and monitor config file. Take a peak at them for what you may be missing. I don’t know if it will work on your system because resolutions and layouts may vary.