Sometimes, you just need a little time waster and Dustoff: Heli Rescue is the perfect solution for a no-brainer, yet surprisingly challenging mobile game with just the right touch of nostalgia. 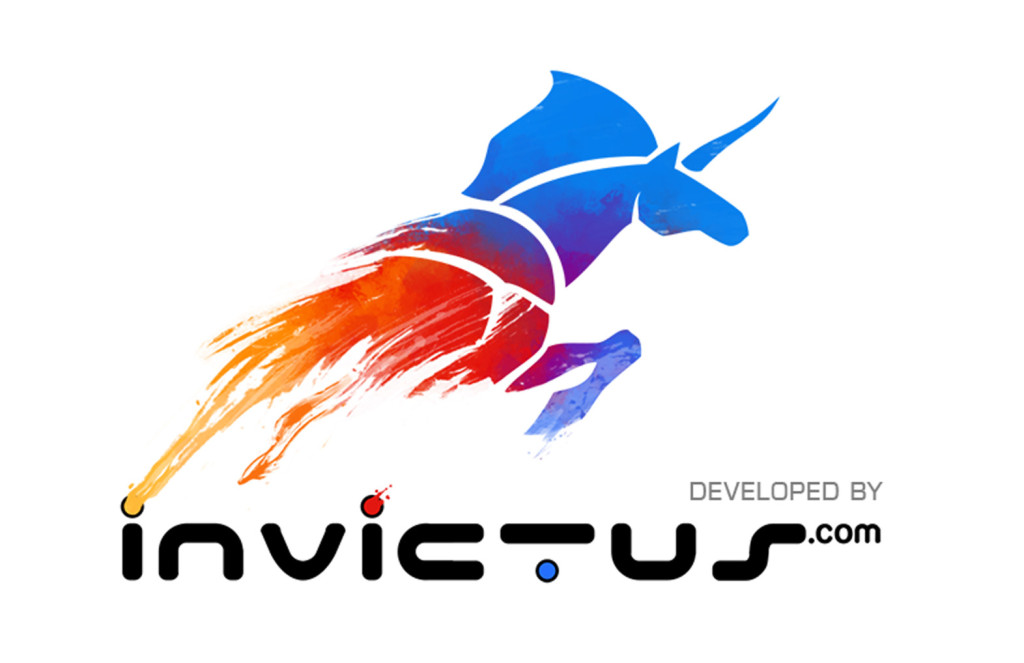 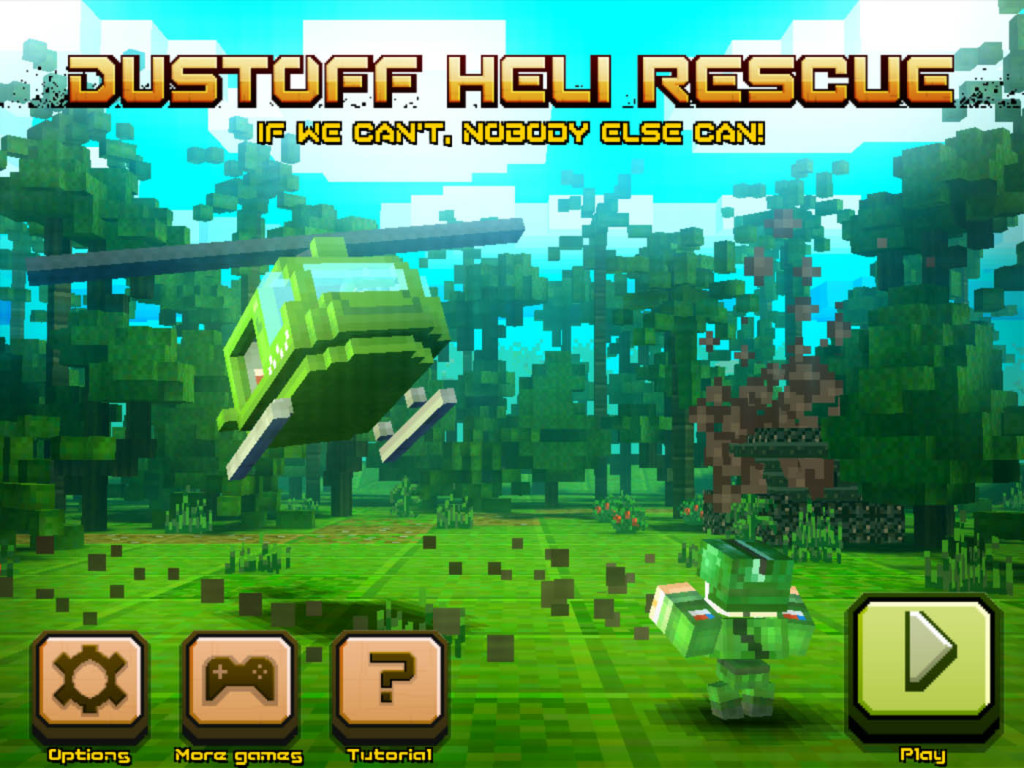 I first spied Dustoff: Heli Rescue on a sale site that was offering it up for 99 cents. After glancing at the reviews, and noting the frequent references to the old classic “Choplifter”, I knew I had to gamble my not quite $1 of hard earned bank and give it a shot. I purchased the game through the App Store for my iPad 2. In doing the in-depth research for this article, I have come to find that this game has also been ported to the PC and is available on Steam for $3.99 – a bit rich for what it is perhaps, but if you catch it on sale, I’d go for it. The PC version seems to be tarted up a bit with better lighting and explosion graphics. Reviews for both the iOS version and the Steam version are resoundingly positive, pointing to the fact that this little gem hits the right gameplay balance.

The graphics are intentionally blocky to replicate the Minecraft type of presentation that is popular these days. While initially skeptical, the graphics are actually quite cool and look better in motion than in screenshots. Settings for the iOS version are very basic, with options for sounds on/off, three graphics quality settings, and a control mode that can be toggled between PRO and AMATEUR. 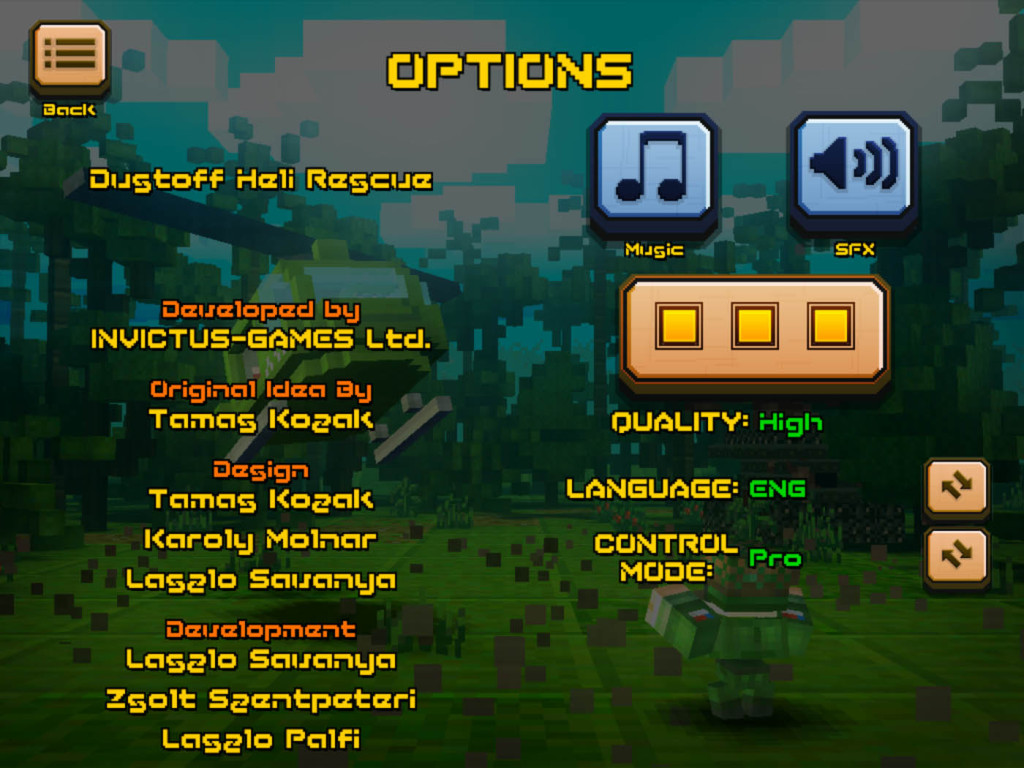 Presentation is basically a 3D feeling side-scroller that has an excellent auto-zoom in and out based on your speed and regime of flight. As you slow and land, the camera moves in automatically. As you speed up in sideways flight, the camera pans out. It is very well done and perfect in both design and implementation. On the iPad, controls are very simple, but allow for awesome refinement and control of the helicopters. Using a finger on each hand (most naturally your thumbs), you press and gently tap simultaneously with both fingers for symmetrical lift, and with one finger to tilt the helicopter to allow the lift vector to take you sideways. In the AMATEUR mode, you can just push with one finger when you want to fly sideways and the helo will accelerate and stabilize in sideways flight. In the PRO mode, you have to be careful not to overbank the helo or your lift vector will quickly lose it’s horizontal component and you’ll fall out of the sky. It is hard to describe, but the controls are perfect – just the right amount of sensitivity, and just the right amount of needed input to fly and feel like you are really piloting something. 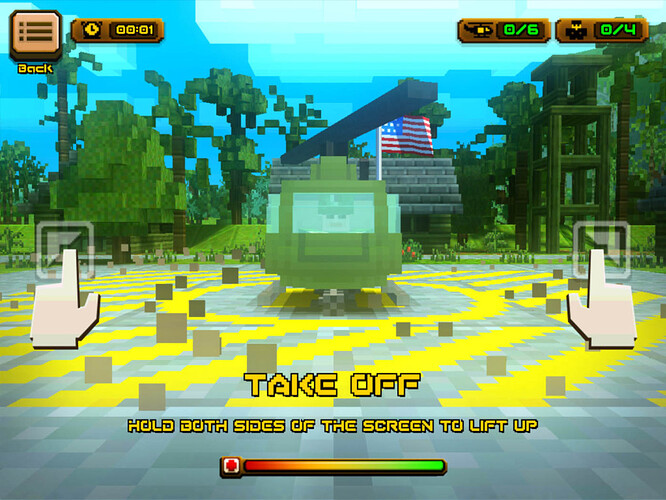 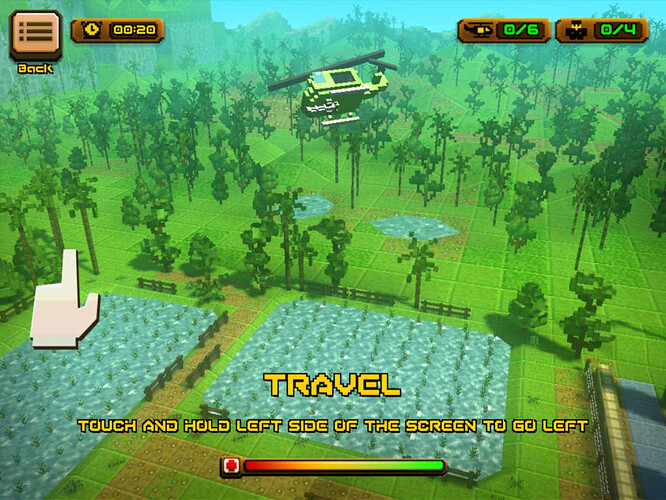 Missions vary, and I’m only about halfway through the ranks so there may be additional types in my future, but they generally consist of rescuing troops and moving cargo. The missions start off predictably easy, but soon ramp up in difficulty with more entrenched adversaries, obstacles, and weather. You are ranked on how quickly you accomplish the mission, but speeding through missions is not necessary for fun gameplay, and there are no countdown timers that I’ve encountered yet. The mission goals are stated in the short pre-mission briefing and usually include how many troops you are required to rescue. Based on that number, you can do some simple math to determine which type of helicopter you’d like to use. You earn access to new helicopters with better capabilities and more troop space as you progress through the levels. At present, I have a Little Bird, Huey, and Chinook to use. For levels requiring delicate flying through caverns, it may be wiser to give up the troop space for the maneuverability of the smaller helos. The helos can also be equipped with various guns and rockets that you are given to as you level-up through the progression of the game. 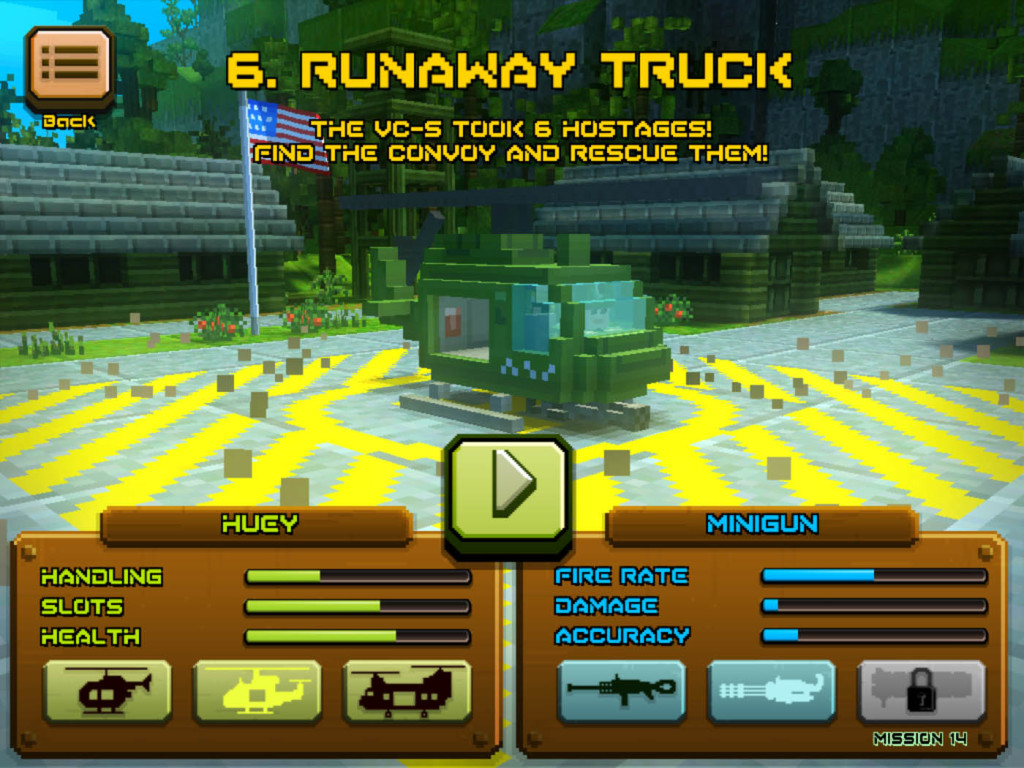 Defending the areas you fly into, the enemy troops (VC) will shoot at you with guns, surface-to-air missiles, and bunker mounted machine guns. It is usually pretty easy to dodge the incoming missiles provided you keep on the move and stay out of their engagement zone. A damage bar shows how close you are to being destroyed and there can be some tense moments when you are limping back to base with a smoking hull hoping not to get hit by any additional fire. Some missions can be completed in one sortie, others may require multiple sorties in multiple directions (left and right). Returning to base drops off your troops or cargo and repairs damage to your helicopter. Weapons firing is automatic with the AI determining what and when to shoot, and this works out perfectly because you don’t have an extra thumb to hit a firing button (I don’t want to hear anything about additional appendages you can use to whack the firing button either you sick readers!). 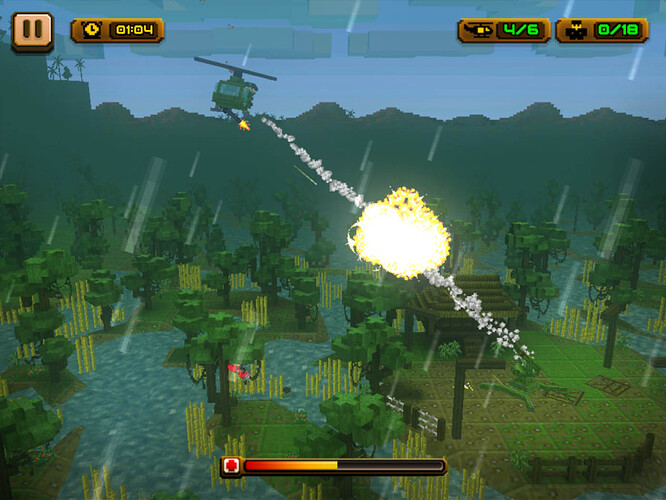 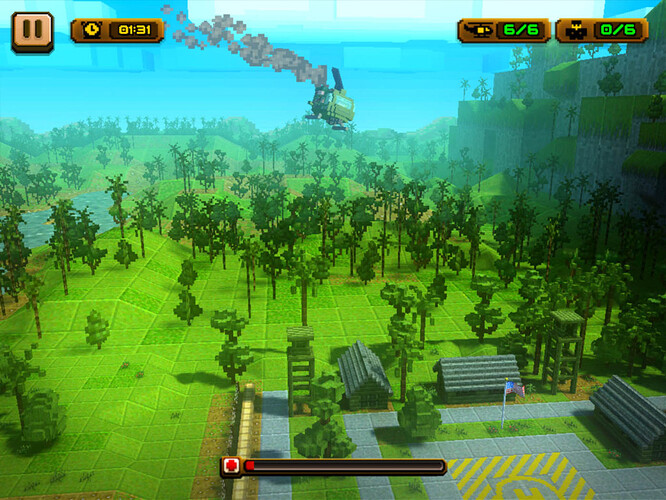 Some missions will have you sling-loading supplies or vehicles and the weight and rope interaction physics are well done for the level of entertainment software this is. The shifting load and pendulum effect can be quite unnerving and requires a delicate touch on the controls. Some of the cavern levels require some very precise flying, but it is well balanced and finds that sweet spot where when you fail you know it was because of your own impatience and not a flaw in the design of the game. I can’t tell you how many times I’ve been five or six minutes into a mission, completed two or three lifts successfully, then lose my concentration for a moment and run into a tree (collidable trees – they beat DCS to the punch!!). 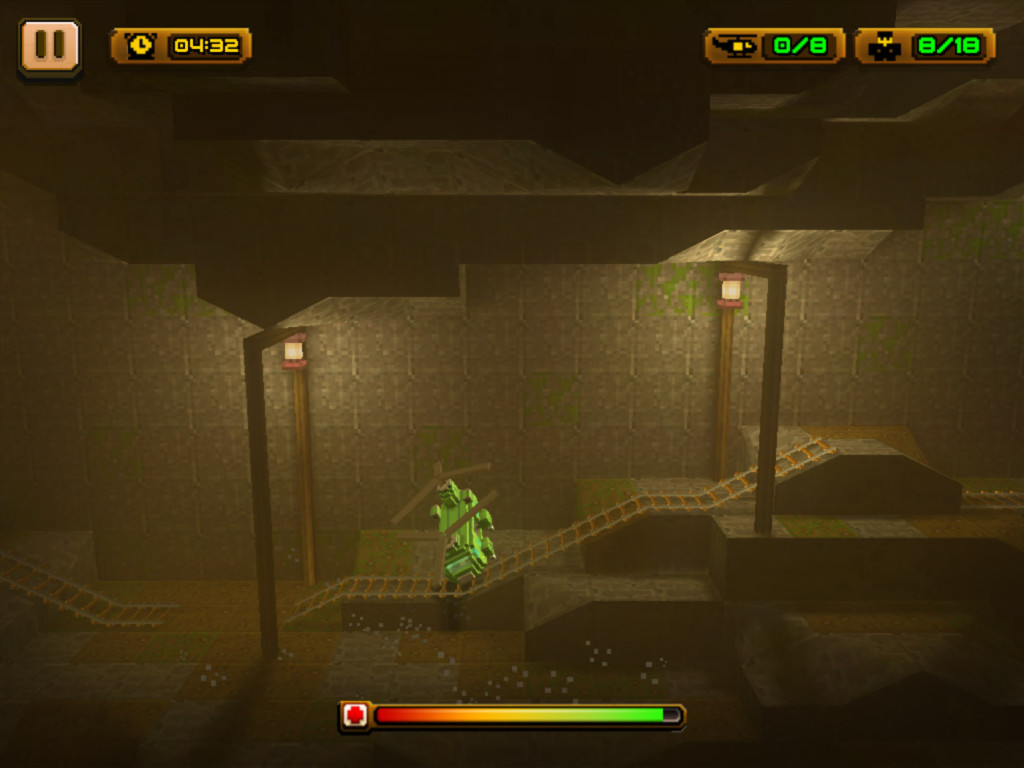 In summary – this is a great little mobile app with some fun gameplay when you have some moments when you just want to mentally check out and do some old fashioned arcade flying. I regularly revisit the game to try to get through a level or two when I’m waiting in the car line to pick up my son at school and it helps make the time fly by. Nice job by the developers and I hope they pursue additional content or similarly structured games. Like this content? Want more of it? Let us know – we are a fledgling site and your input will help us shape our future!

Does it have a rectangular VRS zone?

That looks great! Does it support DK2?

Going to have to pick this one up. Glad to see they make an Android version, too!

Yes this is a fun little game. I had the privilege of getting to beta test this one and had a blast. I still play it frm time to to time for a quick fix and it always satisfies!

So glad to see you review mobile titles too!

So glad to see you review mobile titles too!

@Echo They did a great job on it…hope to see some additional software from that group… I’ve got some additional mobile games/sims I’d like to write up some reviews on…as usual, not enough time in the day!

I see Dustoff Heli Rescue for PC is on sale today for $1.95 - a great game for couple bucks!