I don’t know jack about the game…but this video is pretty cool… It sounded like a movie!

Yep, she’s a beauty all right…

I think I don’t play as much as I like as I’ve got it stuck in my head that ‘it’s a commitment’ thing, as in unless I’ve got at least 3 hours clear one evening then I won’t achieve much. I have plans of trade routes and mining but never get started. That of course means I don’t start it up and then just end up playing some other game (for 3 hours of course, but only starting ‘for a quick go’).

I had a quick play last night. Tricked myself into it but just using an Xbox controller and not bothering with the trackir/hotas. If you ever up installing it @BeachAV8R, we should definitely get @Navynuke99 to give us a proper tour in a ‘wing’ or something.

@fearlessfrog - Can I land in Alaska? Because that’s all I’m good for these days…

Well, the first expansion pack ‘Horizons’ is meant to include icy rock planet landings, so there’s that…

So the video of the capital ship at the beginning of the thread - that is AI right?

Yes its an Ai conflict zone and the cap ship is Ai.

When this happens conflict zones will appear in the system and you can choose to enter a conflict zone and select a side who you will fight for (as seen at the beginning of the video).

I believe later down the line they are planning to be able to walk around inside your ships and I believe larger ships requiring co-op work is on the road map… but who knows.

So your saying that was a Russian ship??

(Full of rice and milk however…)

Elite:Dangerous is a world where you will get shot at and killed for not leaving your parking space within 4 minutes elapsed, just to put the game’s ethics in context…

The sound design never ceases to find new ways to impress and amaze me. WOW! I have yet to see any capital ships myself in-game. Here’s to hoping they start populating more systems and conflict zones with them!

We should see more of them in the future. The alien artifact was discovered and we all know what that is a precursor to.

@BeachAV8R, yes the ethics are a bit tough for a simple parking violation… but hey rules are rules

The alien artifact was discovered and we all know what that is a precursor to.

I thought it was still basically an “unknown artefact?” 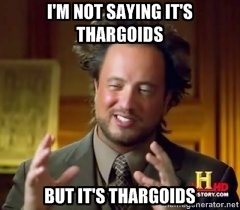 They make a cream that can reduce those.