End of an era at Farnborough airshow

This is a big blow to the airshow community. I have been going to Farnborough since I was a little boy. Very upset to hear this news.

The hunter pilot that crashed at Shoreham has completely decimated the airshow scene in the UK. We all make mistakes and I understand the events of the crash but he has done real and lasting damage through his actions.

Terrible shame. I hope the dwindling attendance of the shows doesn’t continue or we face the real possibility of our classic aircraft being either parked up in museums or sold to buyers in the states. Very sad. 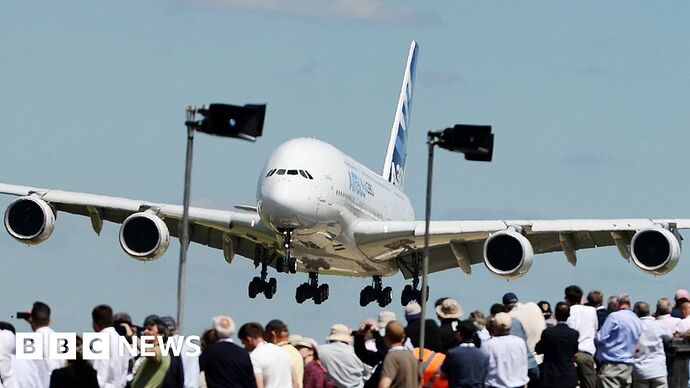 Organisers at the airshow say the Shoreham air crash had "expedited" plans to cut the public weekend.

We have one air show in the Atlantic provinces of Canada and I am always surprised that it continues each year. It costs a lot and we never attract the stars of the air show circuit. This year is an exception with the Blue Angles coming to Greenwood, and I couldn’t be happier. But I am surprised every year. There is another show in Bagotville Quebec at the Canadian Forces base and I think I need to start attending that one too.

It is sad to see flying displays scaled back slowly over time. Granted, I am not in a high population area so I realise that the expense is significant here but still.

Really!? I mean REALLY!? Britain saved the world and airplanes saved Britain. It is as much a part of the DNA as Earl Grey.

The Quinte International Airshow at CFB Trenton was dialed back too.

It makes me sick. I’m interested in aeroplanes because I went to these shows as a kid watching them being pushed hard, fast and low. I saw the MIG 29 collision at Fairford. I’ve seen a p38 lightning crash at duxford. I’ve seen a midair between a skyraider and a mustang (mustang pilot bailed at 300 ft! Walked it off and flew to malaga the next day in an airbus. I’m not kidding)

I’ve never ever once felt my life was in danger. Never felt anything but safe knowing that professional people trained to do this are doing it for my enjoyment. Accidents of course happen but that is to me like being struck by lightening.

All these children that might not get to experience the noise and wonder of the shows makes me more than a little sad. How can we possibly remember the heroics of ww2 pilots if we see dusty machines in museums or grainy documentaries. How can we know the fear and peril they put themselves in for our way of life to continue.

What about the lesser known conflicts? How are kids ever gonna know the majesty of a sabre chasing a mig 15.
I could go on forever. I have some AMAZING stories from airshows I’ve been to. Stuff that I think about every single day.

Sneaking under the fence to the field opposite duxford so the planes were 200 ft above our heads (dressed in full camo on a bright summers day) laid on my back taking photos.

Watching an apache blow my wife off her feet it was so low above us and the Co pilot laughing his arse off.

Buying earmuffs for my husky and tying them to his head so the we could watch the tornados outside Fairford without destroying his hearing and then having him fall asleep on the pavement all day.

Watching a typhoon come over the shuttleworth collection at such a speed and so low that all the little pre war aircraft wobbled about dangerously.

I could go on if people want to hear them but back on subject.

These shows built a love of aviation and history in me and I see the same thing in my son everytime I take him.

Its a sad day when health and safety makes us loose our identity as a people.

Its a sad day when health and safety makes us loose our identity as a people.

That is a shame. Went many times as a kid, and the visceral noises of some of the fly-by’s was essential for any flight fan.

The cynic in me sort of thinks this is probably more about the profitability of the trade show part. Farnborough wasn’t always public, I believe. There is probably a spreadsheet somewhere where they think killing the public day would help the bottom line overall, with the health/safety being a convenient scapegoat.

Your absolutely right. But unfortunately I think it’s a scapegoat that will be used more and more. I’ve heard other rumblings from elsewhere as well. Deeply unsettling.

Soon it will be just me flying displays on dcs. And that really will be a shame

Soon it will be just me flying displays on dcs. And that really will be a shame

On my sixth bolter with @Wes and @Franze the other night I did punch myself in the face, so even DCS isn’t health and safety stress free…

I know how you feel! I think I killed Franze’s evening a week or so ago taking 20 mins to get on the basket of the tanker… I was almost pleased I flamed out and he could get on with his day…

It may take some time, but the loss to the people of such shows and the wonder it inspires to young people to get involved in aviation (whether that be flying, maintenance, manufacturing or engineering) will start to manifest and these shows will have to come back, despite their costs.

That is a shame. The Farnborough Airshow is indeed a British institution. It has had it’s share of tragedy too:

On 6 September 1952, a prototype de Havilland DH.110 jet fighter crashed during an aerial display at the Farnborough Airshow in Hampshire, England. The jet disintegrated mid-air during an aerobatic manoeuvre, causing the death of pilot John Derry and onboard flight test observer Anthony Richards. Debris from the aircraft fell onto a crowd of spectators, killing 29 people and injuring 60. The cause of the break-up was later determined to be structural failure due to a design flaw in the wing'...

I guess we were made of sterner stuff back then. The problem we have these days is that everything has to be 100% safe, not because of real concern for people, but rather the potential liability.

I know it’s the world we live in but I can’t understand the mentality of people who pay to go to something that has 30t fighters zooming around at 500mph and then sue when one falls out the sky.

Its like going to a rally course and saying mud got in your eye. I do not get it

Surprised to see the public part go considering its history and it was only every 2 years anyway. Past few times I went didn’t think the display part was as good as others like Fairford or Waddington.

The airshows I enjoyed most would have to be RIAT at Fairford and Flying Legends at Duxford.

Unfortunately, I find airshows a bit difficult to enjoy after my brother’s accident at Duxford. I have been to a small local show a couple of times, and one large show at Houston but the thrill and excitement are just not there for me anymore.

As for people suing, it is indeed the times we live in. People don’t have any sense of responsibility for their own actions. For example, placing yourself just outside the fence at the end of the runway so that you can take photos without paying the entrance fee, puts you in a rather precarious position should something go wrong.

killing the public day would help the bottom line overall,

This, unfortunately. The Farnborough show has been heading this way for some time. I used to go as a child, but felt less and less welcome there as time went on. It felt very much like we, the general public, we’re getting in the way of the serious business. The best displays seemed reserved for the non-public days. I haven’t taken any of my children there, though they have enjoyed the Biggen Hill air fair a few times. The BBMF display brings out big grins every time, particularly when the ‘bombs’ start going off.

I find airshows a bit difficult to enjoy

Paul I hope I didnt offend by listing the accidents I’ve witnessed and I certainly hope I didn’t list your brothers accident. My intention was to show my feeling of safety at these shows despite the unfortunate accidents and in no way was I boasting about or glorifying them at all.

I hope that’s clear mate and again sorry if I came across the wrong way there.