Edit: I’m going to update this OP to keep track of updates and useful info regarding this aircraft.

Necessary information in this video regarding functionality and current bugs:

That’s one cool airframe! The Italian AF has one that is equipped for TACAN calibration, that visits from time to time. It looks like it’s doing 200kts when parked and shut down.

Sweet!
How is the systems depth?

Agi, with regards to the systems, it looks like there is partial implementation. The Collins PL21 is a really interesting piece of kit, but I have not had time to use it on a cross country to understand its depth. The Carendo B350i for P3Dv4 also has a partial implementation of the PL21, and I really like it, especially as compared to a traditional FMS/CDU setup.

2. Simulated:
a. startup and shutdown procedures
b. engine controls and operations
c. autopilot controls and operations
d. partially operation of the electrical, pneumatic, hydraulic, fuel systems.
3. Emulation of Proline 21 avionics suite. Currently there is only one layout that will allow you to operate the aicraft in all scenarios. Many improvements will come in the future.
4. Installation in the 3D cockpit of the default X-Plane 11 FMC.

I’m watching this video now to get a feel for the systems. For sure I haven’t found a manual yet. That’s probably to be expected given the price. BTW, I consider watching this video necessary to operate the aircraft, since there doesn’t appear to be a manual. There are numerous bits of information that I found useful, like the YD switch being inop and having to press both AP buttons in order for it to engage.

Since I’m no longer able to edit the original post, here are some updated links… 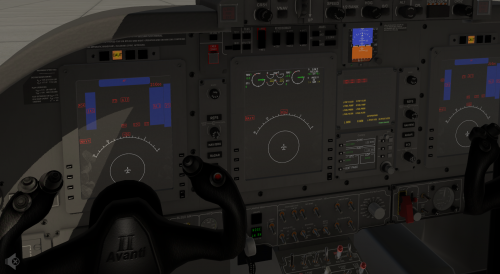 Hate to necro an old thread, but I’ve just discovered this one, and seem to be having lots of issues with it. Anybody still flying this one?

I removed it a year or so ago, was having some kind of annoying plugin tool bar which I didn’t like and a pop-up from X-Aviation about activation IIRC…

It is incredibly fun to fly and pretty fast for a turboprop, so I would love to know if or how this stuff can be fixed.
Maybe I should just try again, now that I know more about X Plane plugins

Agree with Freak. Good add-on plane, but the X-Aviation pop-ups are a PIA. I don’t remember the toolbar thingy. There were a few items to be worked out on the panel, but otherwise flew well and would track a course in the FMC. I would say for lovers of the design it’s worth a look, but not for the mildly curious.

So, I asked in the X-Pilot forums, and apparently the issues I’ve been having are known - throttle axes don’t both play with my Warthog, the condition levers are borked, and a few other small bugs. He promised they were being addressed for the next update. I’ll wait before I revisit.

@Freak, I saw that toolbar as well. Apparently, it’s something to do with being a freeware version of a previously payware plane? Haven’t figured out if disabling the Gizmo app will still let you fly it.

Good info, thanks @Navynuke99. Let us know if you spot an update!

That’s a nice plane - I have one for FSX/P3D - very nice to fly and with added weirdness factor.

Anybody still flying this one?

I haven’t touched it in some time. Sorry to hear there are issues with it since it was pretty darn nice when it was functional.