From a recent post at r/hoggit. Mision download link in video description. When the mission loads, instead of grabbing a slot right away, hit ESC once to start the script and then ESC again to select your slot. Remember your a/c side number because you will be sequenced with AI and you need to know when Marshall is directing you. Use F10 Other then Airboss to get sequenced. Refueling and a kneeboard available. Complete with LSO debrief.

Just gave this a whirl.

This is one of the better scripted carrier ops missions out there. Much more immersive with other traffic, dynamic comms menu and radio chatter. You get a full LSO grade report afterward.

Now I can only imagine how much detail SuperCarrier will provide. Thanks for sharing!

I needed a review of holding patterns (the stack). Marshall or mother will kick you out of your slot (pls correct my terminology) if you are off of your assigned angels and outside of 5 NM. They will add you when you return, but IME you will be last and might need to tank. Remember to be on your assigned angels by 10 NM from mother. 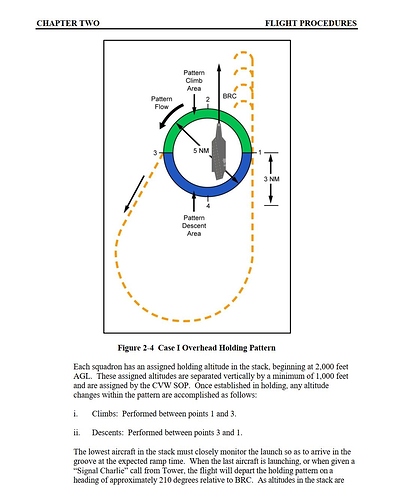 We tried an earlier iteration of this scripted mission in multiplayer with our group.

It sort of worked initially but unfortunately it went off rails pretty soon. But it is quite good!

I’d love to see something similar from ED themselves. These community contributers rose the bar pretty high, though. If I were ED I would try to include this stuff as a feature in DCS World but that’s just not the way they tick (see SRS, Vaicom, @MBot 's dynamic campaign, even Heatblur’s Jester AI or A-G radar technologies could be leveraged on the platform but will probably stay in the confines of this one single third party developer)

People that are flying this mission as Case I, how are you doing? I seem to be busting the pattern slightly if I get more than about 2 nm away, which doesn’t jive with the diagrams above at 5 NM. Also, I getting INVALID pass grades even though I’m getting 2 and 3 wire traps. Am I missing a communication step that I am commencing?