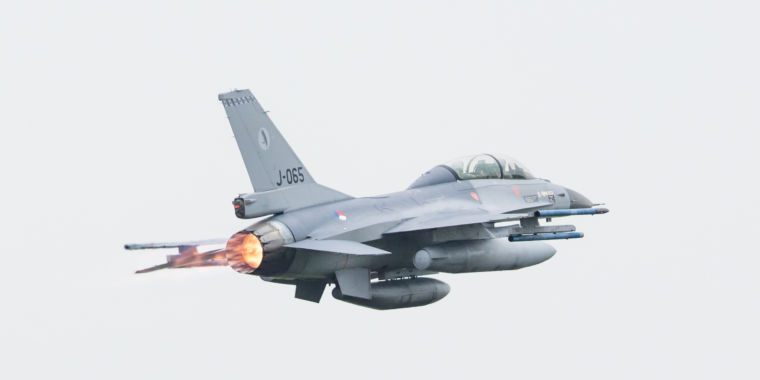 Dutch F-16 flies into its own bullets, scores self-inflicted hits

Fighter safely lands after accelerating through cloud of its own shells.

Very interesting! But why did they insist on making a big deal about an unrelated aircrafts magazine size at the end?

The pictures I saw almost look like a slow/underloaded round which caught the fuselage.

But why did they insist on making a big deal about an unrelated aircrafts magazine size at the end?

Slow news day, I guess. the 25mm is probably one of the better things about the F-35.

Funny story time.
One of the simulator instructors is a retired colonel and he had the dubious record of having shot down a G-91.
The G-91 he was flying.
And to eject as well!

It all happened after a ground target strafing at a shooting range.

I can’t imagine the mockery.

A problem an A-10 cannot ever face.

So after the first time this happened, nobody thought to train everyone not to shoot the gun then go into a steeper dive and pull up all without every adjusting heading even the slightest?

I get that shooting yourself down isn’t a thought of concern for the most part - but there was already evidence this was possible.

Points to whomever first posts a video of them shooting themself down in DCS in this fashion!

Points to whomever first posts a video of them shooting themself down in DCS in this fashion!

It all happened after a ground target strafing at a shooting range.

Typically USN pilots practice strafing by shooting a the ship’s wake, or at a float-thing towed by the ship in its wake - I’ve never seen a ricochet from strafing….50 cal? Yeah, lots of ricochets…like skipping a rock off the water.

I genuinely think i did this in the f15c.

It depends if bullets are modeled to slow down that much, if at all, or they just “despawn” at max effective range.

You can “follow” the bullets just like a bomb with the RCtrl+NumpadPlus command. You just have to shoot the gun from F2 view and it will track the rounds.

I don’t recall off hand how far they go.

As for a slow burner, it’s coming out in the conveyor and.getting lodged in a kevlar jacket. If it still was in the gun the explosion would be out of the barrel therefore no pressure so no round travel. And one FUBAR M616A1

When that’s what you’ve got, that’s what you use. Pretty sure it’s not forbidden, given the times they’ve done so in training and in combat. Even F-14 crews practiced it for the longest time as it was their only authorized A/G weapon til the 90s.

Oh I know that was my opinion sorry lol.

As with everything it’s truly a mathematical problem.
You have a bullet traveling a path with a trajectory that will be probably modified by a certain angle by the impact on a surface.
You can reduce the probability of a “bad” ricochet by applying a proper attack geometry.

That said, chance is a harsh mistress and probability is not certainty…

So you are saying that the only thing certain is uncertainty itself?

Even F-14 crews practiced it … was their only authorized A/G weapon til the 90s.

A moment of silence as we remember the days of the pure Air-to-Air Tomcat.

I’m actually not sure about it.

Almost all the A2G weapons delivery manuals have engagement profiles for strafing. Usually a minimum recovery altitude combined with a dive angle restriction. The Harrier for instance is a 1423 ft AGL for direct over flight, assuming a dive angle greater than 30 degrees. It’s 218 ft AGL for a 60 degree lateral break or a dive angle shallower than 31 degrees. This is all based on fragmentation and ricochets.