Here’s my 2020 Falcon BMS 4.34 experience when I flew mission with then really experienced Falcon BMS skilled Polish pilot called “B3rNO” and with one our pilot from originally 42nd Czechoslovak Virtual Squadron called “slide” who was also experienced. I’m sure you know “B3rNO”, he’s a winner of world dogfight championship 2021 (or 2022?) in DCS World and “slide” also participated on the same event. Pleasure on my side.

You know Falcon Online is Player vs Player match. We flew as bad guys on RED side (everybody wants to be a good guy on BLUE side) and our mission in this online PvP campaign wasn’t nothing better than just beat NATO (Blue side) with all their superiority in technics and weapons.

Of course, we human pilots as RED side received only F-16 Block 40 without some pods and with limited types of and amount modern weapons which can used instead well and better equipment NATO F-16 Block 50/52 driven by human pilot on BLUE side. Simply creators of this online PvP campaign wanted to simulate MiG-29 possibilities.

Mission: To strike NATO Armored Battalions on target steerpoints 4 and 5 where recon showed us AA battalions and very dangerous Patriot batteries there! Personally based on my skill and experience I took only 4x LGBs + 4x AMRAAMs, slide took CBUs (cluster munitions) which is probably the best option to destroyed as much as possible armored targets. And finally, B3rNO took LGBs also.

B3rNO and slide wanted to shoot down NATO F-15s (AI driven) as air threads because F-15s were HOT on our flight when we reach target area. Unfortunately, Patriot batteries shot downed B3rNO (flight leader) and then we also lost slide because when he went down under clouds (I warned him that is not good idea!) to be able to used CBUs in CCIP mode, he got hit from FIM-92 Stinger (MANPADS). On Balkans you never ever can go lower then 10 000 ft! Otherwise MANPADS will shoot down you. Better keep 20 000 ft if there are SAM or AAA.

Fortunately for me whole time when I searched and attacked targets, I was only SPIKE by Patriot battery but nothing fired to me because I keep distance.

When I flew in target area (STP 4 a 5) weather was good enough to release two LGBs but later was not possible to find window in clouds to be able to lock targets on TGP therefore I made decision to go back and safe plane and the rest of weapons because situation was still dangerous. I was nervous from repeated spikes by Patriot on RWR.

During all those activities I had only time to call rescue helicopter for B3rNO (status RS in debriefing) and miss time to call it for slide as well. Too many things what you need to do under press.

It was also my first PvP flight completely communicated only in English due to international crew of our flight, so my premiere and definitely new experience. 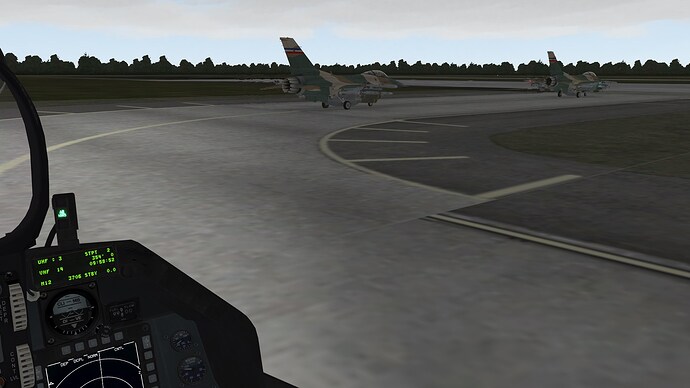 In combat formation with human pilots B3rNO and slide 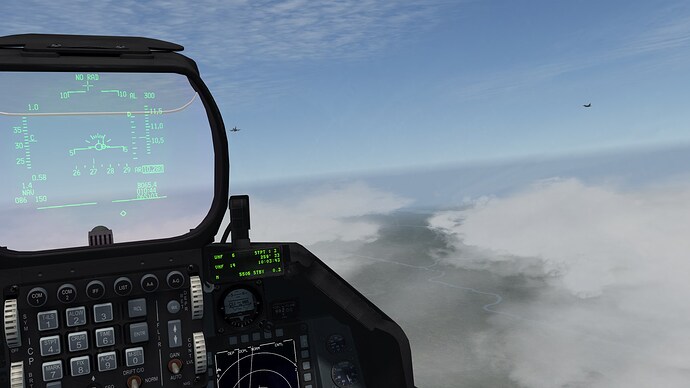 We had to focus on destroyed as much as possible NATO tanks and help ours RED ground units because situation on ground was not good for us. 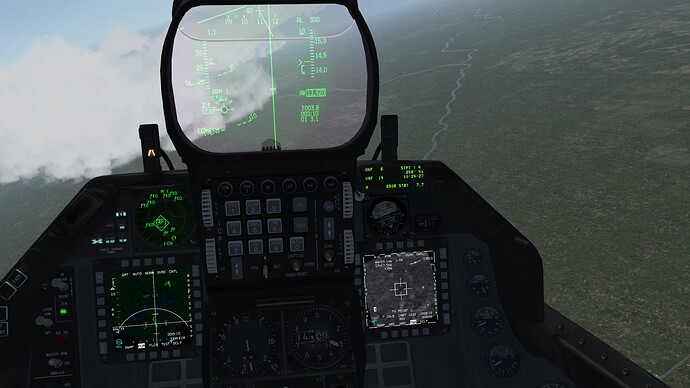 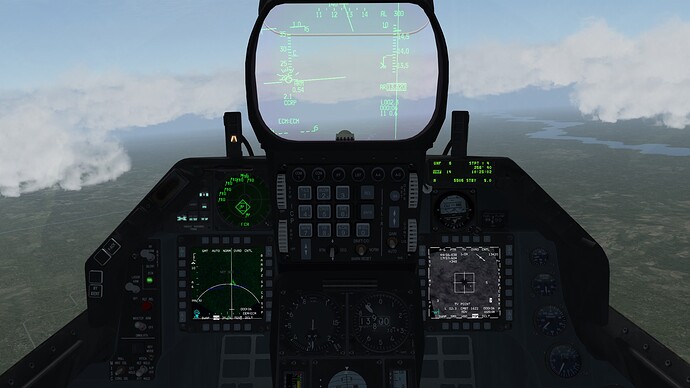 Target destroyed by LGB, safely without unnecessary risk to be hit. 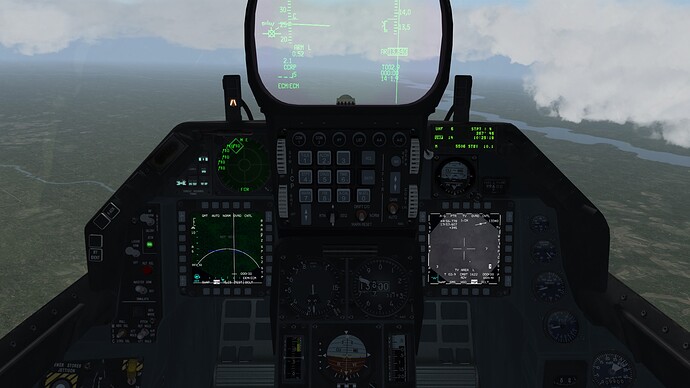 Other attack, due to weather condition was not easy to find windows in cloud to be able to hit target without risk to go lower and be got hit by AAA/MANPADs. Trust me there was usually very bad weather with mist and cloudily everywhere over Balkan almost in each mission! 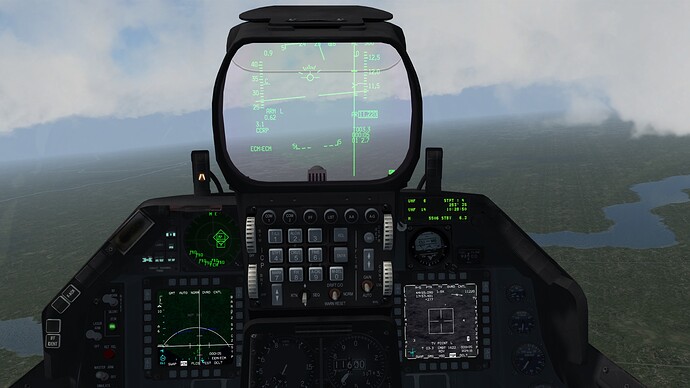 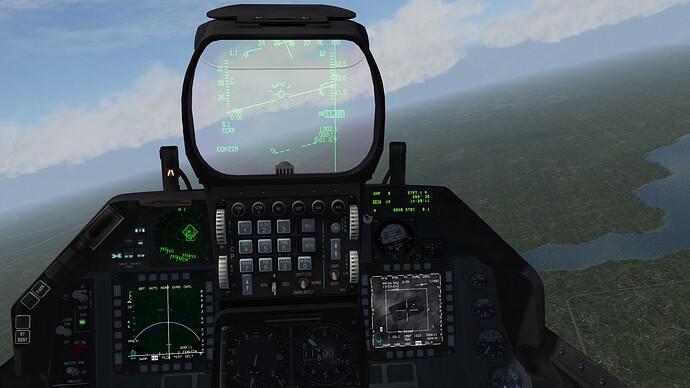 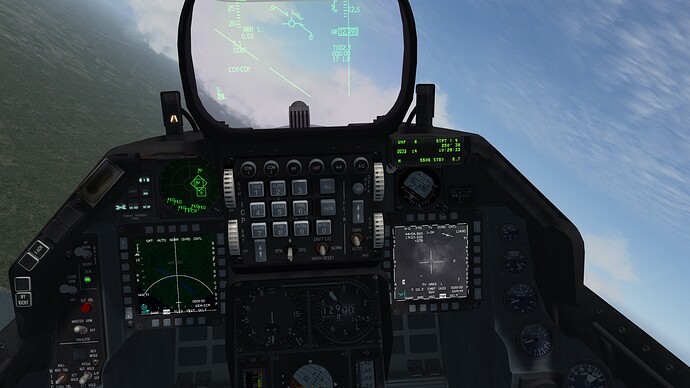 Unfortunately, B3rNO and slide were shoot down and I was only one who survived!
And now and this was completely new situation for me I had to fly back and landing alone (really strange feeling) but on the other hands with non-damage plane and the rest of weapons because in campaign is everything count!

Each (even if empty!) fuel tanks or AIM-120 or GBU or plane which deliver back to home in one piece means that next time you will have chance to fly with something and load somethings on pods.

In reality this also means that landing is more difficult because you are heavier. 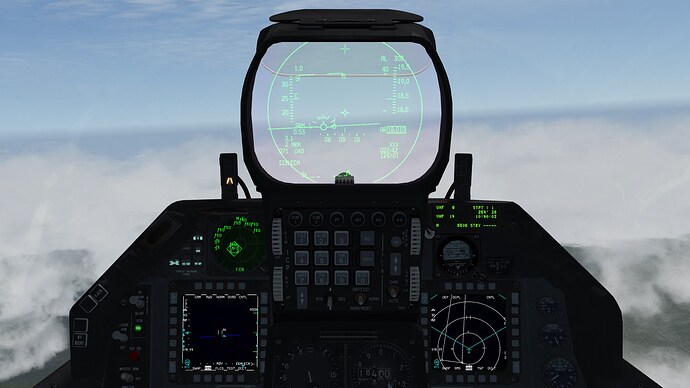 It was not time and conditions to release full AG load 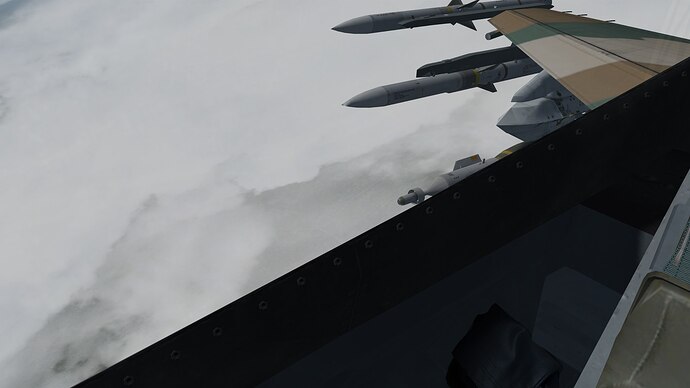 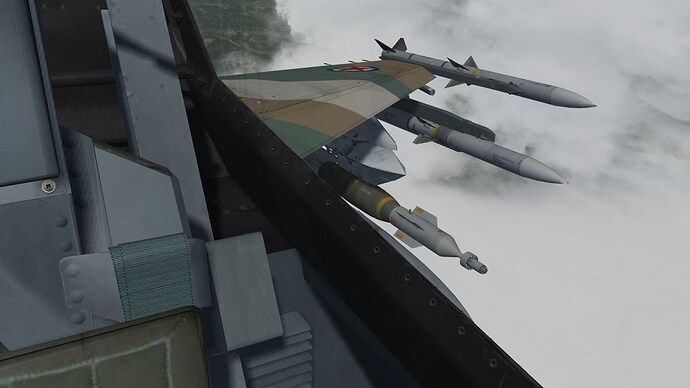 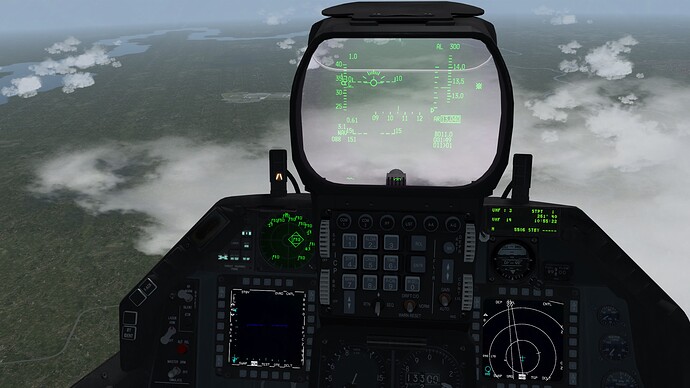 Final
To be 100% sure that undercarriage is ready I was checking it in cockpit. If I remember well Falcon online doesn’t allow external views in air! 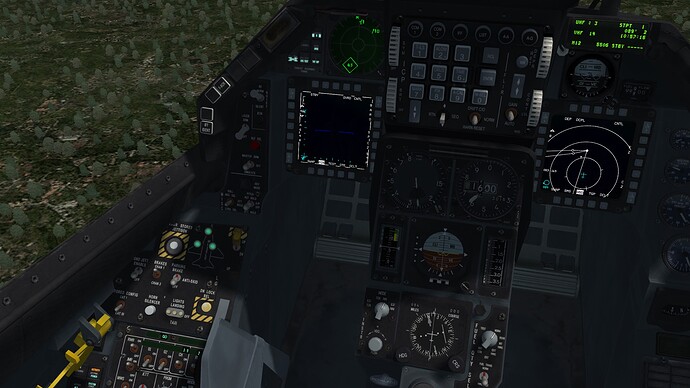 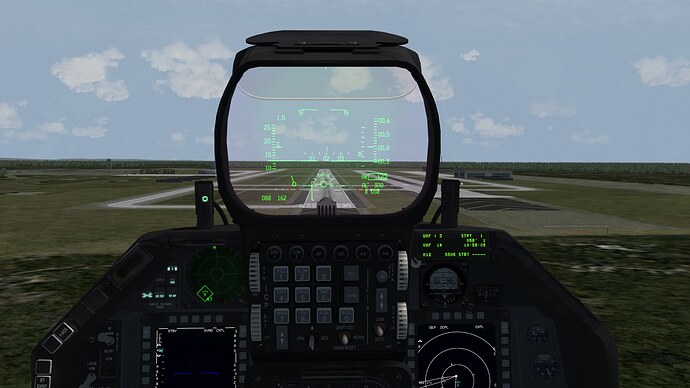 Landing successful although I was almost on the end of runway because I was too heavy and touch on runway later. Landing in Falcon BMS could be a challenge. You can easily damage avionics if your speed is higher than should be. 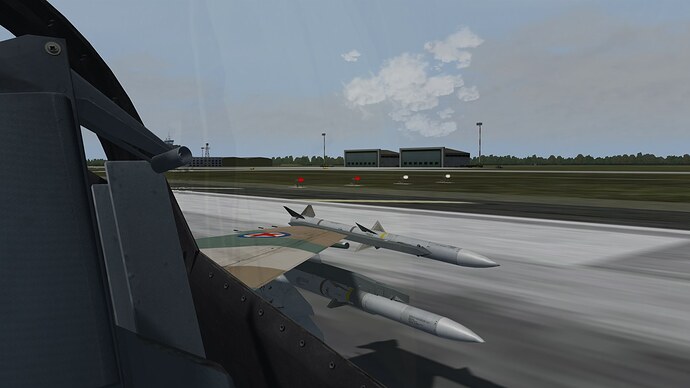 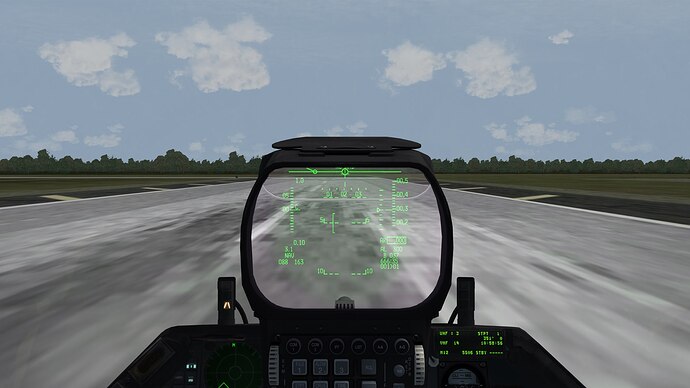 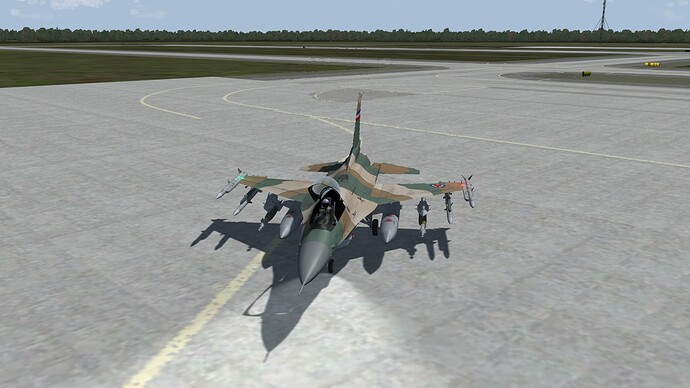 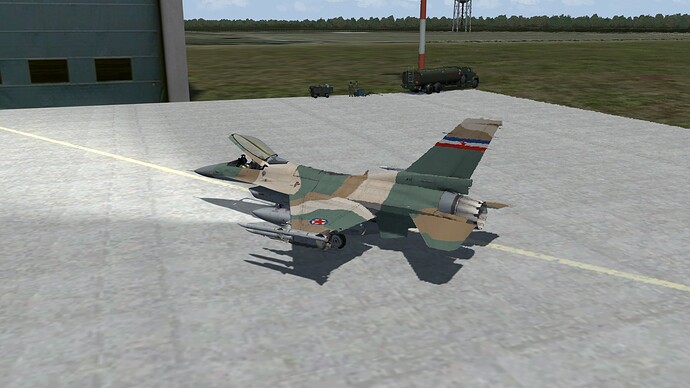 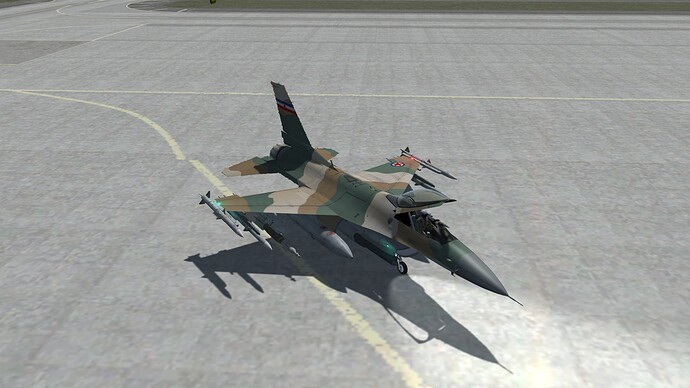 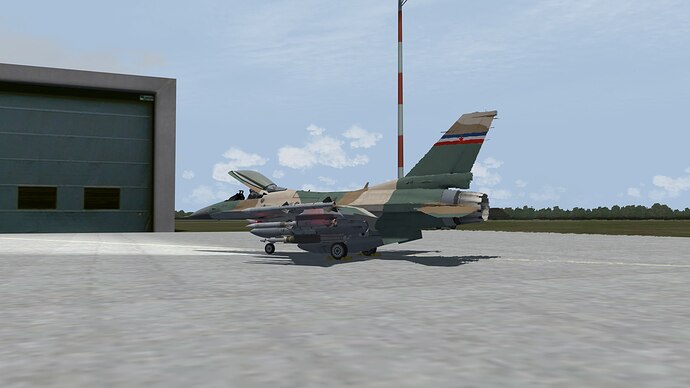 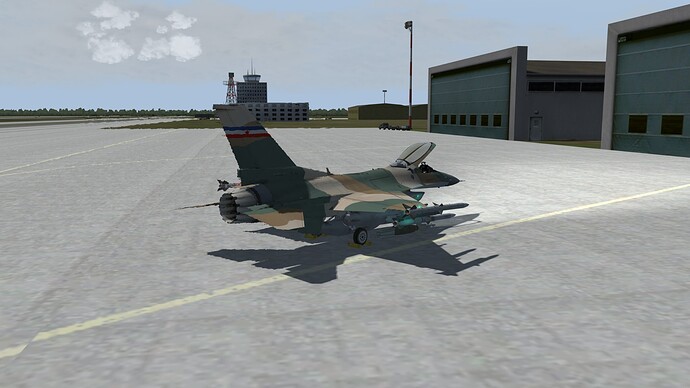 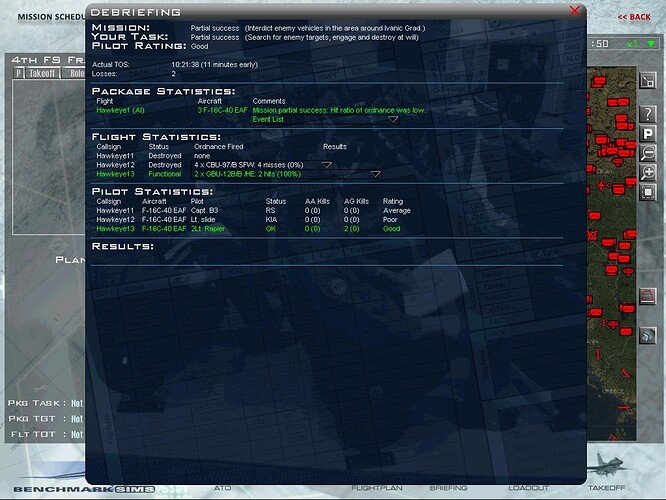 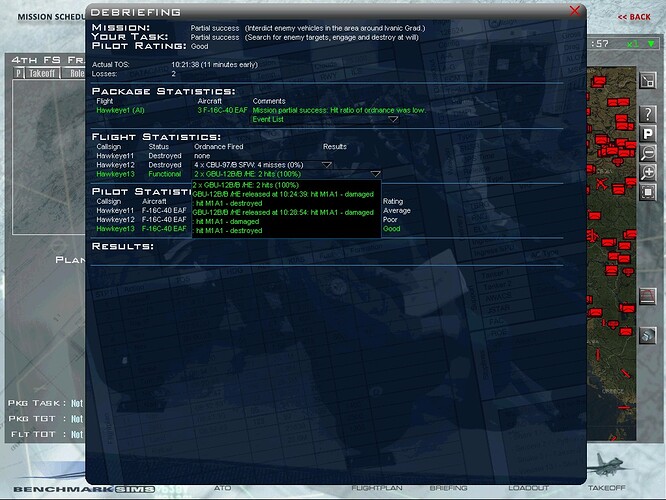 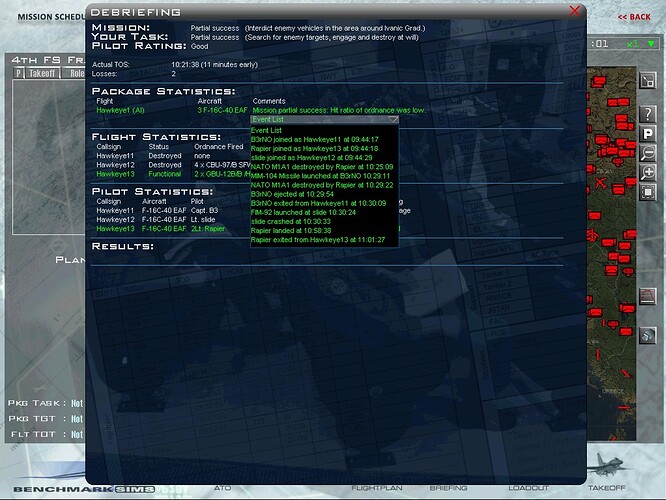 Don’t be afraid to be part of Falcon online community and remember that return with non-damaged plane and even if with full load is always better than be shot downed (still better be rescued) or killed. Next mission you will have opportunity to fly it again and better. If you have an air kill but lost plane result can be later lack of planes which can be driven by human pilot and your side will lose campaign.

Let me know your opinion on AAR report even if you are flying DCS Word nowadays. Are you interest to see other in future?

Note: originaly this article has been written and sent to @BeachAV8R to be (hopefully) published on mudspike.com. Because there’s no response I will release it here.

Note 2: I was originally member of 42nd Czechoslovak Virtual Squadron, the first Falcon squadron in Czech Republic flying online Falcon 4.0 with Super Pack 2 and I was part of it.
See 42nd CSVS and click on Rapier link there!

Are you interest to see other in future?

Yes sir, for sure! Nicely done this one. Looking forward to the next one.

Great read! I don’t fly MP, so it’s interesting to read about how it goes. Also nice bit of tactics discussion on why you needed to stay high. Keep writing!

Awesome AAR! Thank you for taking the time to write it up, I thoroughly enjoyed it!

Thank you all for your feedback. I appreciate it!