Hi Spikers:
So its been two weeks and I havent put the thing in the thing. I havent dropped the thing on top of the thing. The rear seat is as of yet to see me in there for more than a minute. Is it just for storage of my luggage?
Its Big like a Tiger and heavy like a Bear. The inside is dirty, smelly and all used up. The HUD is a step above an F-5 with an at times overbearing glow like a sci fi horror show. It provides you just enough info to get you in trouble. Nothing is done for you. Its like the MiG version of a US NAVY fighter. You must do everything yourself or worse yet, ask the GIB (guy in back) to do it for you. Then its overly complicated. Moving wings (is this necessary?) two seats, 60s avionics and tons of aircraft trying to kill you. Radios and Radars and TACAN, OH MY! I spent time looking at Chucks guide and still I was like… Whaaaaat? It takes time to digest the ammount of stuff. Its ALMOST ALL ANALOG. Steam is king and digital works at 8 bps.
So how is Heatblurs brainchild? FANTASTIC! If you were too young for the prequel, then go back and examine Heatblurs first release. The Fishbed broke grounds when released and still is one of the best modules in DCS. Heatblur turned up the heat (i know, cheap) with the Viggen. It was again groundbreaking. Now here is the Tomcat. Its special and different in every sense from the other aircraft. Why do wanna be aviatiors have a soft spot for the weird, the unconventional. Tell us DCS is releasing an F-4 and we are like “I Want to feel that Pain!” We crave these crazy tough modules. 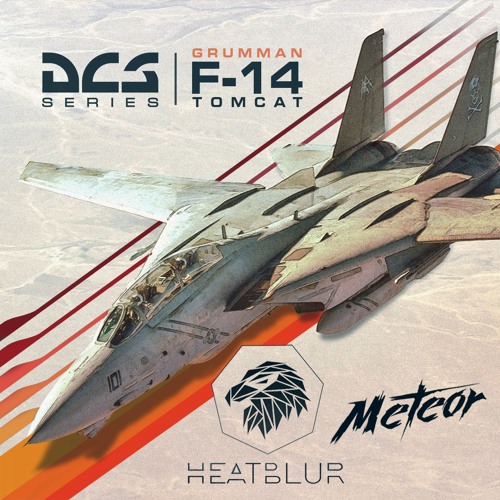 So what is so fantastic then you might ask. Well you see, the Tomcat falls somewhere between the past and present. It was build by folks who fought in WW2 at the height of the cold war. Aviation’s best was in full swing. Budgets were big, you drove a 7 litter Chrysler and you drank Whiskey with your boss at lunchtime. First of the Teen Series (yes, i made that up) it was post modern using the best the 60’s had. The Tomcat is like nothing that came before or after. Its unique, its fast and its an outstanding fighter in every sense of the word. BVR, its got you covered with enough power out front to microwave bald eagles and find your foe way before he finds you. You can then reach out and touch them with some of the biggest missiles ever carried aloft in the west. What is that you say? You missed a guy and now you must tangle mano a mano? No sweat! Drop your tanks and let Jester fill up the puke bag cos the Tomcat got more swing than the King (thats Elvis to you little minnow). It slices, it dices, it makes julian fries out of smaller adversaries. If you abilities fail you then simply power away and come back in the fight from an advantagious point. Its size belies its agility. The power to extens is always there. And you have possibly the worst gunsight in DCS. Yes, the I-16’s is better. The Seabees need you to get some pesky snipers off thier backs? Again, the Big Cats got you covered in so many ways. It can do subtle precision strikes or light up the night with tons of 500 pounders.
Day One,
Ohhhh you can change the HUD. Neat buttons. Must have been created by a Star Wars prop creator. Learn to change the HUD, check!
What is this TID? I can see the radar in the front? Neat!
Weapons switch Off/Guns/Aim9s/SP for Aim7 at top. Pressing the button at the top cycles between Aim7 and Phycos, I mean Phoenix’s.
Then Simply select a Mode. ATM VSL Lo and PAL seem to fulfill my needs. As long as you have waited for Jester to do his alignment (No worries if you started hot or in air) and you cooled your weapon( its on the dash in front of you duh!) you are good to go.
Like the Thunderbolt, when things get messy you got to keep an eye out for Bingo cos shes a Thirsty Cat.
Learn to land on land before you learn how she floats accross the carrier. Its a very effective lifting body with a gun. That attitude of “Spoiler, we dont need no fancy spoilers!”… Yeah, that will lead to you being overrun by a Nimitz class. Use DLC… its not a luxury.
Lazy mans navigation is my favorite thing. Next to GPS, TACAN was the next best. Does what it says on the box.
It Moves, it Shoots, it communicates. But it is like the Harrier very unique. Getting it right on the Tomcat is one of the most rewarding prizes of DCS. Like an onion I am sweetly, softly peeling the layers of the Kitty. Sorry if I sounded like R. Kelly but it is delicious.
I need to learn to refuel and drop LGBs. The weekend and my new monster await me.

So now let us pray that Mr. Chuck Owl never tires of doing what he does. He is a great fountain of knowledge. The hobby would not be the same without him. His guides are fun and informative gems. Thanks for what you do Chuck Owl.
If you can drop him a little patronage. Heaven knows he has earned it.

And you have possibly the worst gunsight in DCS. Yes, the I-16’s is better.

This is the only thing I have to contradict. In my oppinion the Tomcat has the best gun/gunsight combo of any western fighter in DCS. It is fantastic and deadly!

As for the HUD itself, it is a weapon aiming device. I turn it on and off together with the Master Arm. Flying and landing is purely no-HUD for me, as it is simply not needed. I think in fact the flight-path-marker is a destraction during carrier landings that tends to command all attention (which should be on ball-lineup-AOA instead).

This is the only thing I have to contradict. In my oppinion the Tomcat has the best gun/gunsight combo of any western fighter in DCS. It is fantastic and deadly!

I have to agree. That thing is like a laser!

And you have possibly the worst gunsight in DCS.

From tail on? Yes, probably. For deflection shooting? Nothing better. Walk the pipper through the target and you will hit.

I tend to be quite accurate with it. but of course ymmv.

As a flight instrument it’s utterly lacking. Worse than useless in landing. Like MBot, HUD and master arm get toggled in the same sweep.

Went back to the gunsight and had a good time with it. Lazer Beam is the best way to describe it after all. So, I got that part done. I was not using it correctly. I can still use the declutter function, so that is next.
Thank You fellas!