The COVID-19 crisis has had a devastating effect on many cultural organizations, especially those that rely on public gatherings and special events to achieve their mission. Given so much uncertainty, we have made the very difficult decision to suspend all operations of Flying Heritage & Combat Armor Museum for now.

Our mission has always been to celebrate humanity’s spirit during the world conflicts of the 20th century by returning the rare aircraft, vehicles and artifacts within the museum to working condition enabling the public to experience them firsthand. The current global situation is making it difficult for us to serve our mission and we will spend the months ahead reassessing if, how, and when to reopen.

Thank you to our members, donors, community and corporate partners and our employees and volunteers who have made Flying Heritage & Combat Armor Museum so special.

The text I highlighted in bold is concerning since it leaves open the possibility that the museum will suspend operations permanently. I personally felt when Paul Allen passed away the passion for the museum might not be the same with his heirs and this announcement only reinforces that opinion.

A sad thing indeed. The even sadder thing is , no one of his heirs is now, or ever should be hurting, or even concerned about money. Out of respect for him alone they should have left it open forever.

Hard to believe he did not have a foundation set up with the cash flow to fund it till the end of time.

Especially him being one of the worlds biggest philanthropist .

As soon as he passed all future projects at the museum were shuttered and they also shut down his Cinerama project yesterday so the heirs have no interest in the museum or his philanthropy work it seems, just the money…

What a pity . Man had a good heart mostly . He was also pretty damn bright dude , so makes you wonder if he knew the Heirs were like that and might do this to something he had such a passion for. If my children , all or any one of them , acted that way I would still leave them enough to eat and live on , but the rest would go to a trust till someone I had chosen and trusted implicitly to judge them , said they met a certain criteria of behavior . Like oh say respecting the memory of me enough to keep the values I tried to teach them ( in this case I would have apparently failed) to the point they kept things like this open , if nothing else out of respect to me.

Right there with you @Scoop.
There has not been any updates on any of their social media sites about the venue reopening either.

Finally some good Official News on the future of FHCAM from their Facebook page. 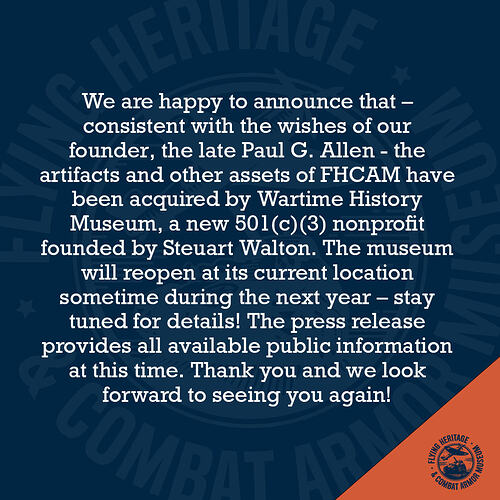 I just started reading this thread because it was on my “unread”. I didn’t check the dates. There was some stuff about a museum. Didn’t particularly care honestly. But then I saw that Paul Allen had died! Really? How did I miss that? The post where I learned that bit of “news” was from 2020! Apparently I am living under a rock.

That’s really great news wheels. Thanks for posting. Too many rare warbirds there to have it disassembled. That and its proximity to Seattle and Boeing’s plant and museums makes it a great destination for aviation enthusiasts.