Like many things in the world there is the American way and then the European way. Take for example the Americans muscle cars vs European Super cars, Metric vs Imperial, 220 vs 120. Even the airline industry isnt safe. Boeing vs Airbus.

As you may remember I did an AAR with the 777. I love the 777, I feel at home on the flight deck. Everything is fimilar and easy to use.

Now the Airbus, well I had to read the 250 pg manual 3 times and I still get confused, But more on that later.

So this is the FlightFactor A350 XWB for X-plane 10. Available from the .org store at the this LINK

This is made by the same team that made the 777. However this is a Advanced model instead of the Pro model. Basically the A350 doesn’t have ever system modeled at this point. For example the FMC is basic and failures aren’t as big of an issue. But if you consider Airbus has only delivered 5 A350s then this is still a great simulation if the A350.

So lets get right into it! Oh one more thought, If you have never been to a destination before don’t visit it for the first time while flying a jet you have never flown before. I mean honestly who knew TNCM didn’t have ILS?!?!?!

Today we will be flying the A350-900 from KMCO(Orlando) to TNCM(Princess Juliana International Airport). We will be Delta(DAL) Flight#274. We will be cruising at FL390. No SIDS or STARS for this flight.

As we show up to the plane the ground crew has boarding stairs ready and we go right in. 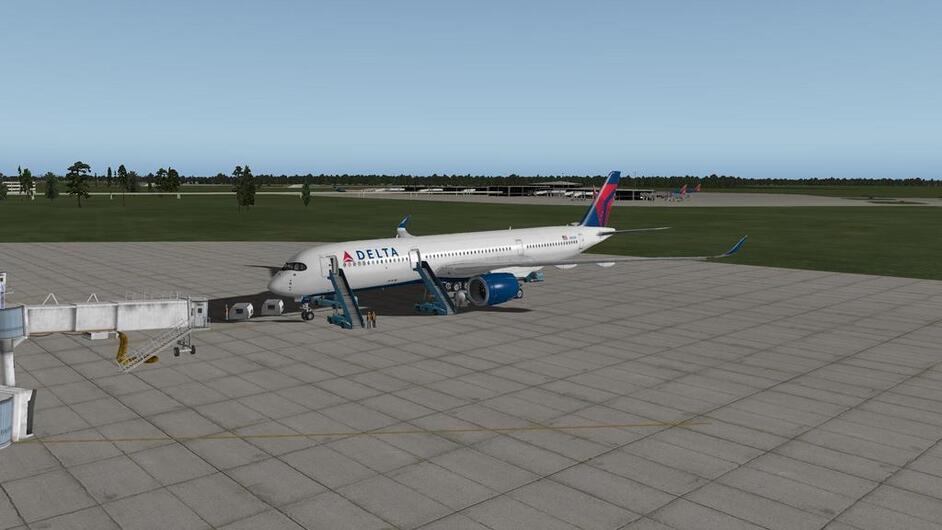 Once in the plane we flip the Battery switch and start the IRS alignment. 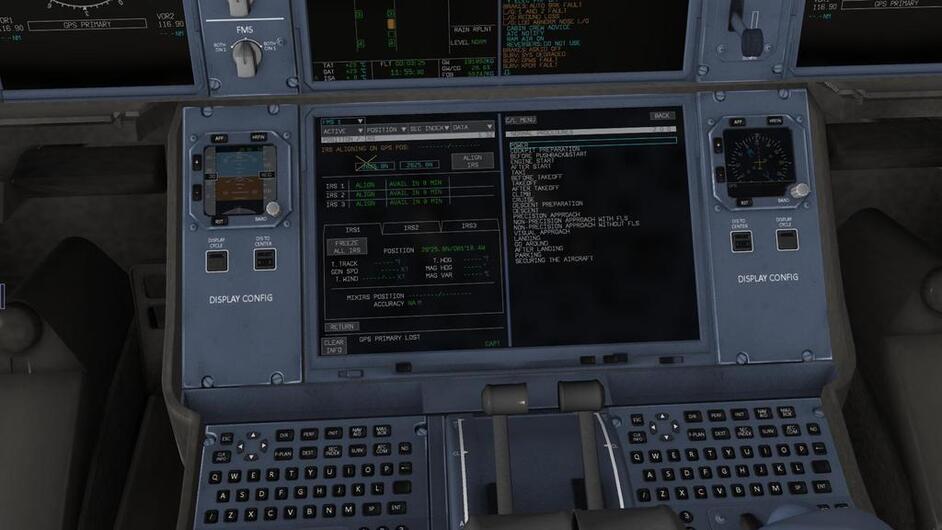 While the alignment is going on the Passenger bus shows up and the fuel truck shows up. 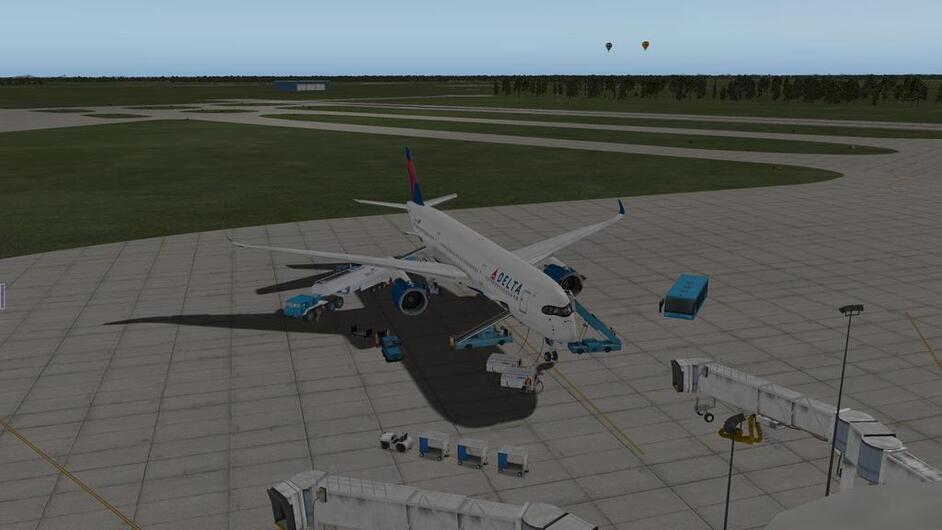 While we are boarding I load up my flight plan. Its a simple task since its a basic FMC. Once we are airborne I will give you a tour of the flight deck.

Once boarding is complete we fire up the APU and request pushback. This is were the product kinda fails, the push back is almost underground. However it doesn’t affect anything just looks bad.

Anyway with the push back hooked up I release the brakes and use the throttle and rudder to steer the pushback.

Once the pushback is gone we fire up the engines and start to Taxi. 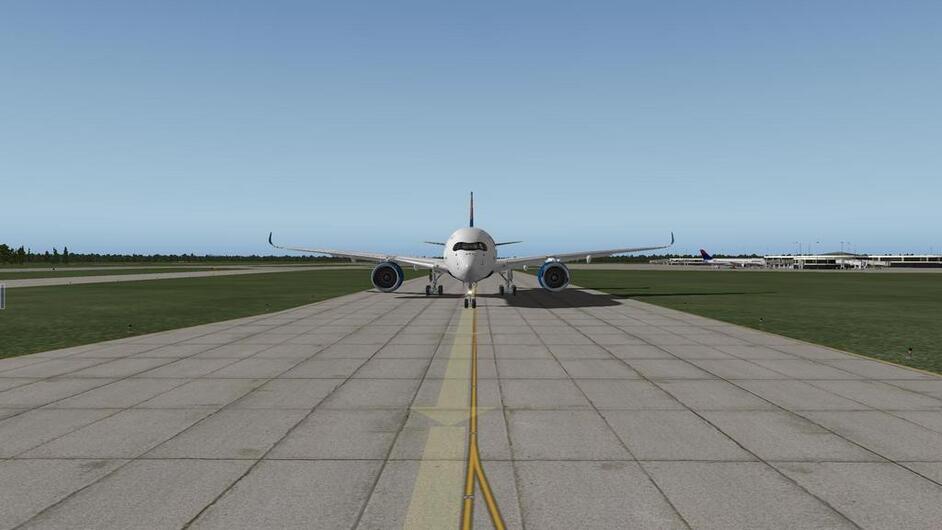 The throttle is different, you know fly by wire and all, Just a little throttle and she taxis away. This is one of the smoothest taxis I have experienced in a sim. A cracked my throttle up a little and taxied away at 15 knots. Never fluctuated at all. 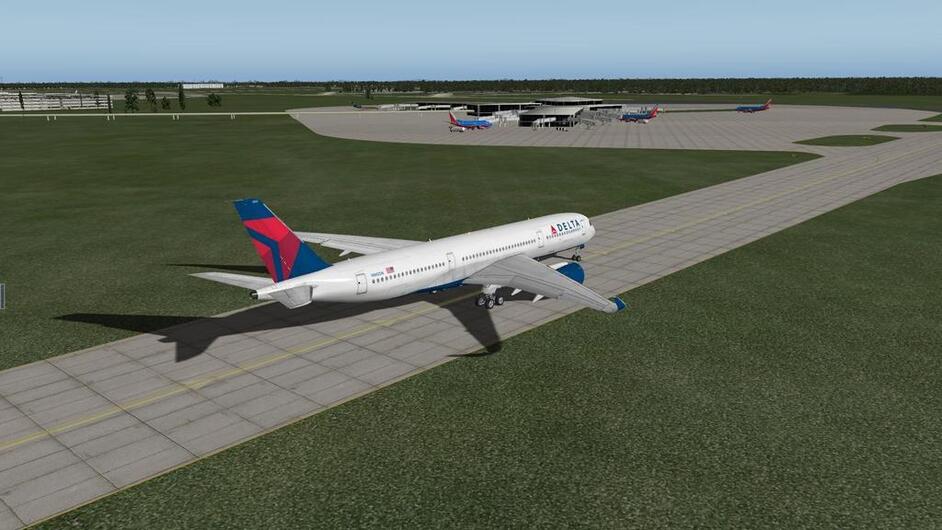 Once lined up on the runway, The Airbus gets a bit confusing. The A350 is designed the be flown on Autopilot. When you throttle up you are engaging the Auto Throttle and after that there are detents for each phase of flight. There is a TOGA detent and a climb/cruise detent. No button just find the spot and you are set. Once airbourne the plane automatically goes into LNAV. All I had to do was hit the AP button and it was smooth sailing!

Now that we are at Cruise, let take a look at some of the panels.

First up the overhead, 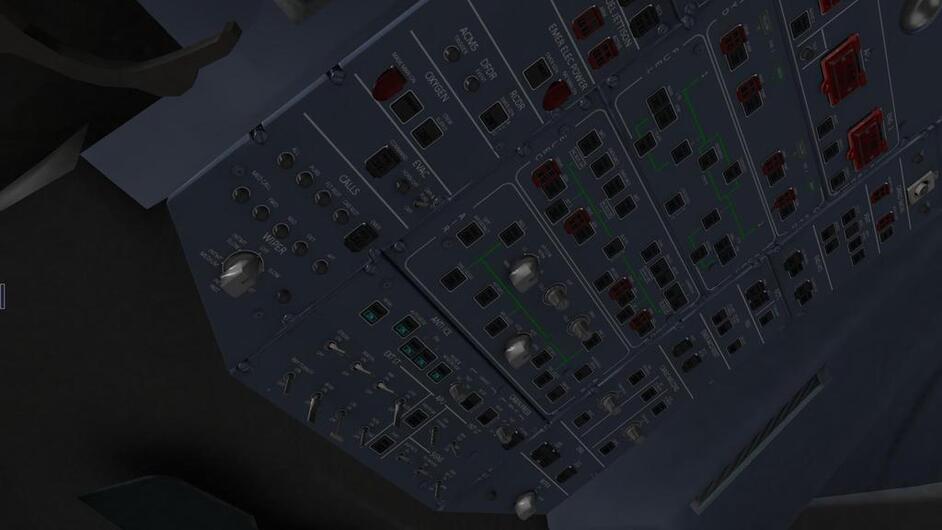 Very straight forward panel. If any white is showing then something is wrong.

Next up the Glare shield and copilots, 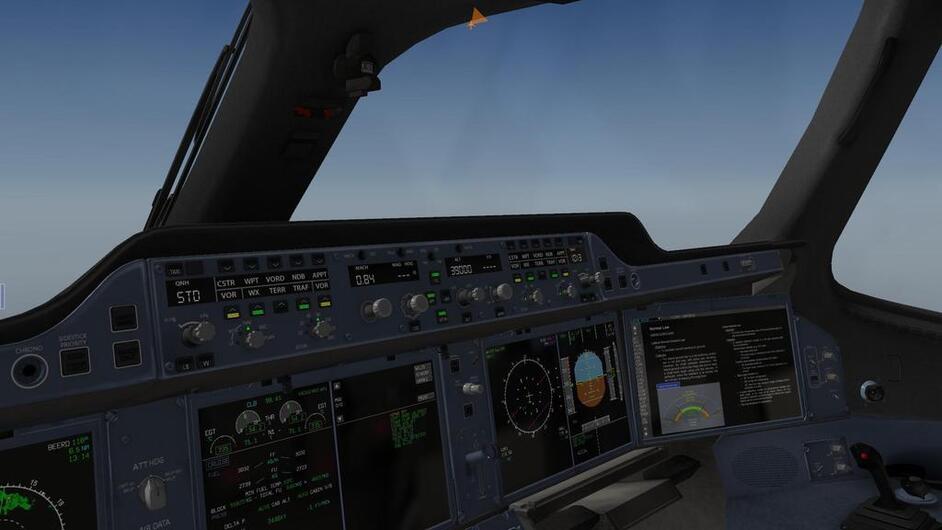 As you can see a very different glare shield from the 777. On the Airbus you have managed and selected modes. Pushed for managed and pulled for selected. Airbus philosophy,according to the manual, is push to push the A/C away and pull to pull the A/C towards you. And yes I still am confused by it.

On to the center console 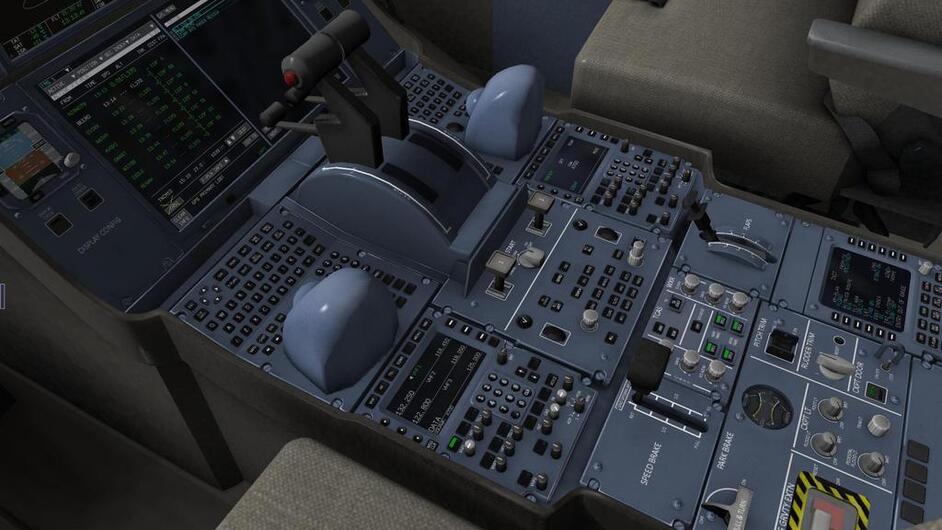 Her we have the MFCD and interactive C/L. Both of these are touch screens and are great. The MFCD has the FMC on it and is very easy to use. The C/L has a C/L for everything. Pull up a C/L and do what it tells you and the step turns green. Very well done.

Also on the center console is the radios. These are my favorites! No dials, just punch in the freq on the number pad and its done! Also a back up FMC.

A better view of the MFCD and C/L screens 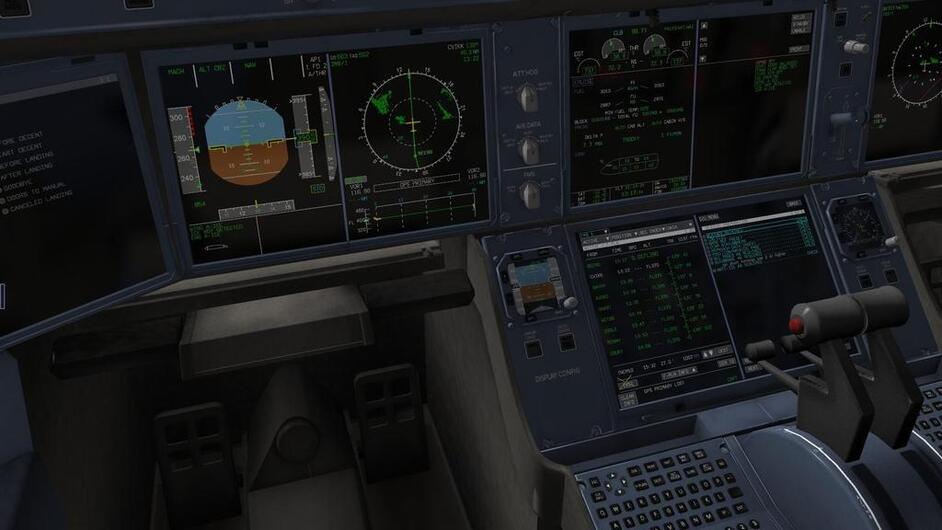 Next up is the pilots touch screen. THis thing has tons of info on it. I can open doors and hatches, position ground equipment, call for a pushback, load fuel and passengers and cargo. 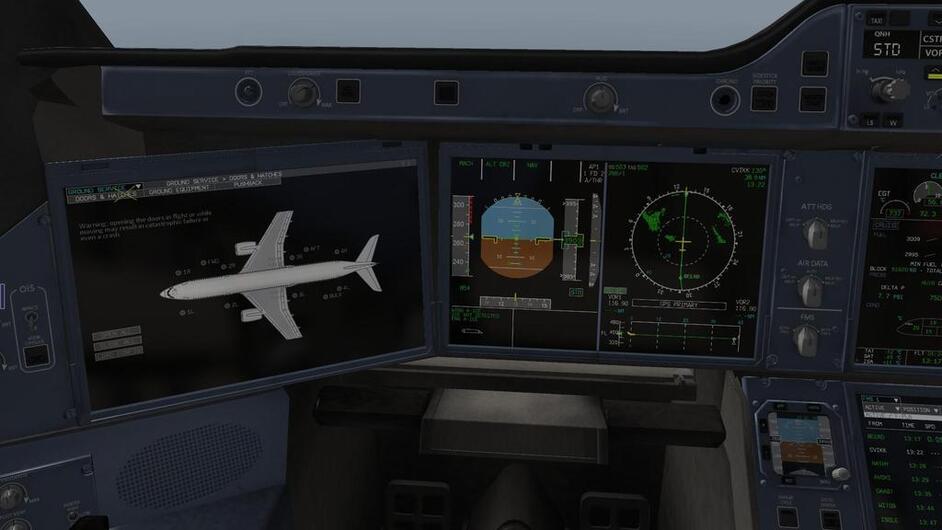 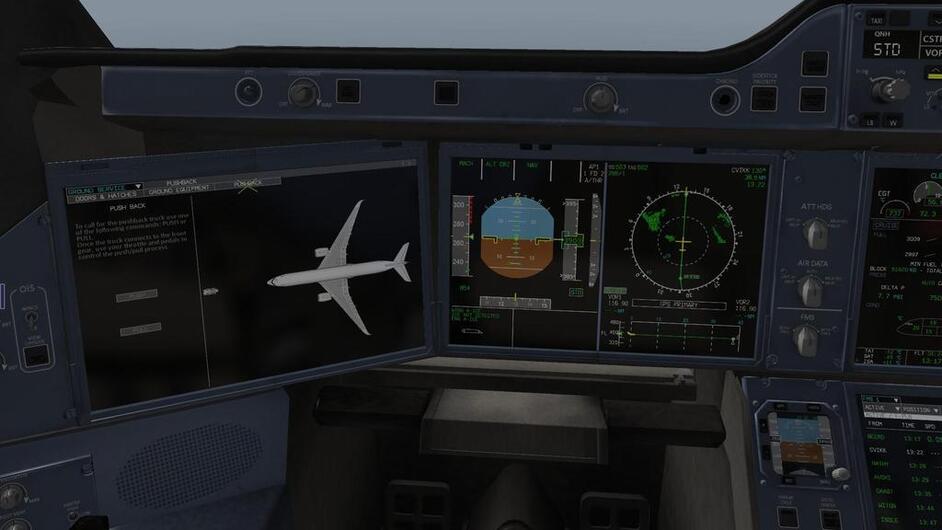 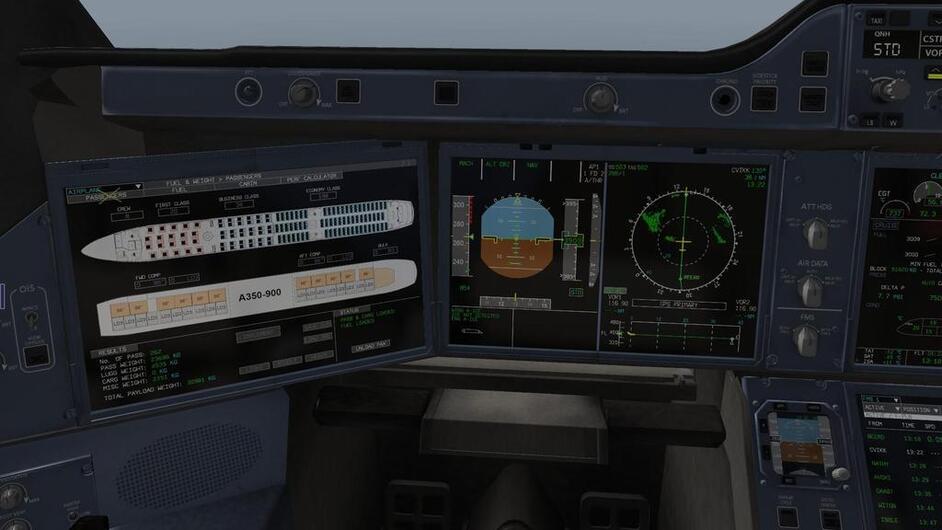 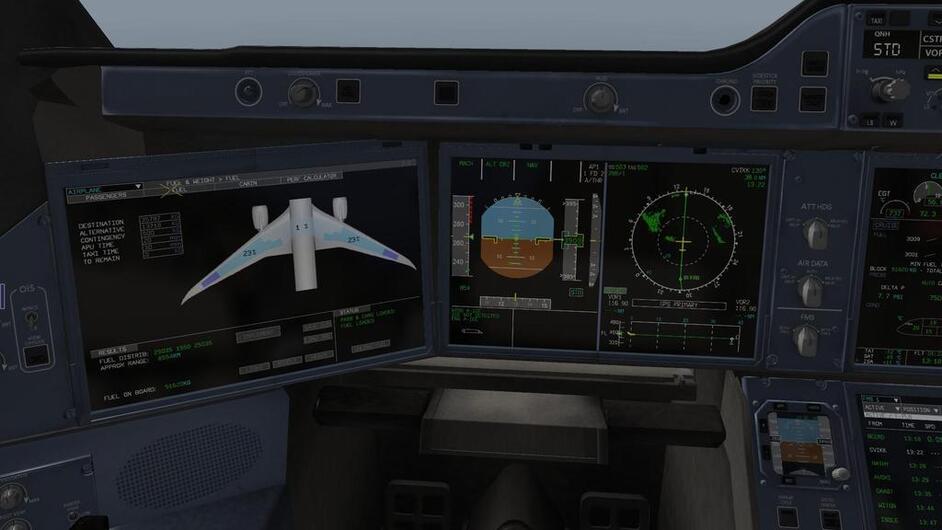 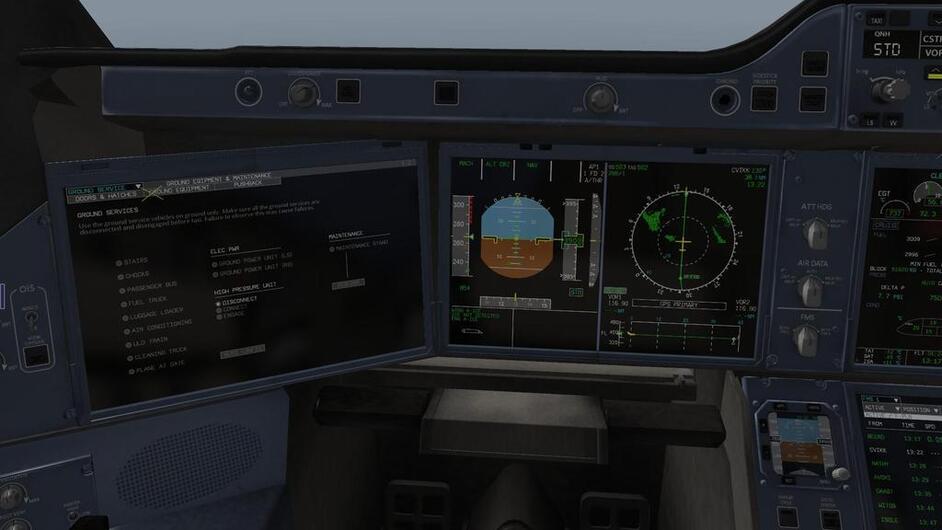 I can even adjust cabin lighting and see water and waste levels. 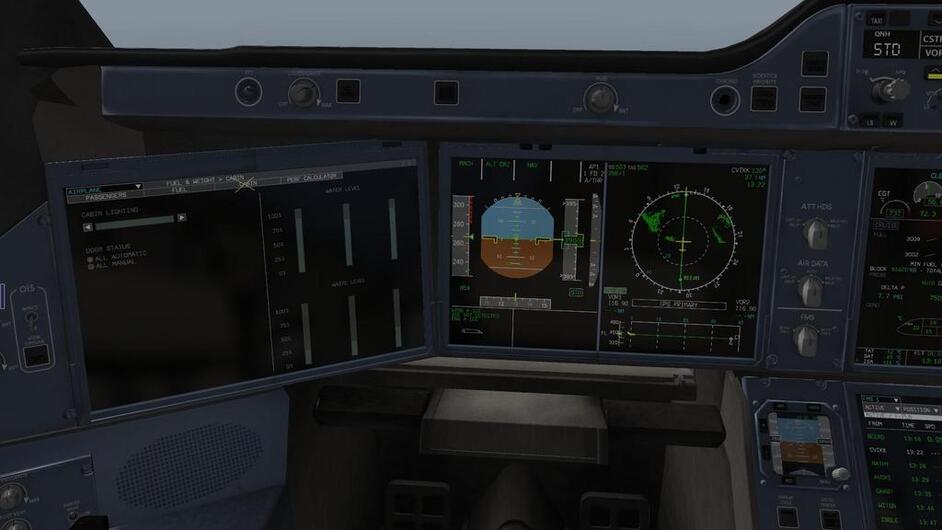 Oh and if you dont turn the lighting on you get a call from the flight attendant. Pretty fun call too, He asked if I wanted Passengers poking eyes out! lol

I can do cabin announcements 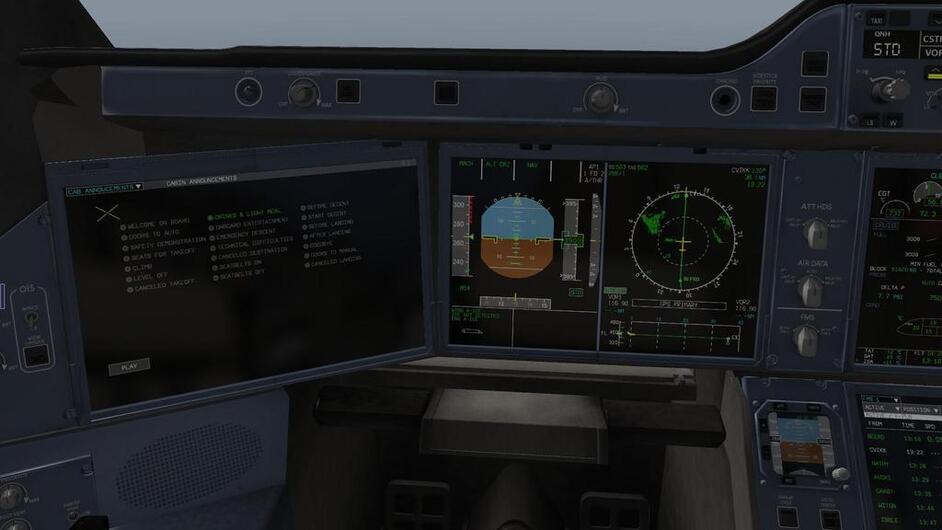 Hell I can even look at the manual! 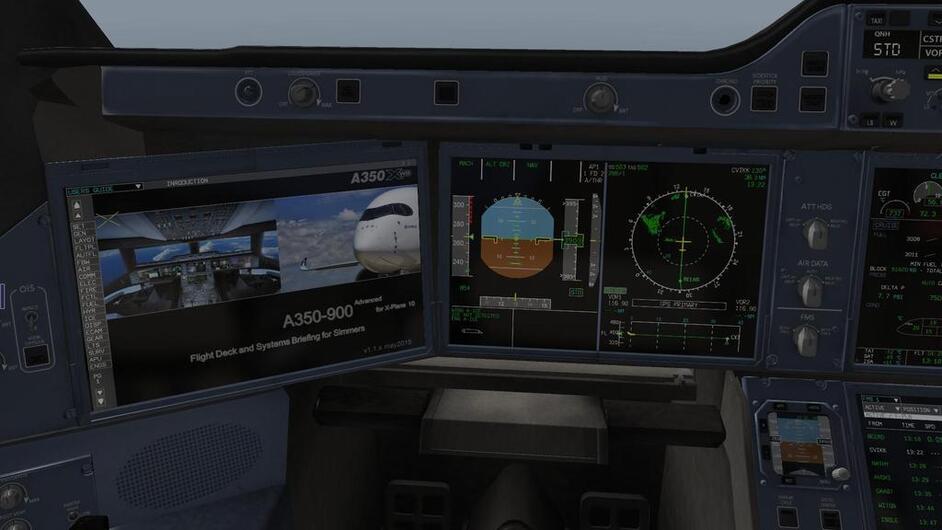 If you remember my 777 AAR you could import charts, Same thing with the A350. 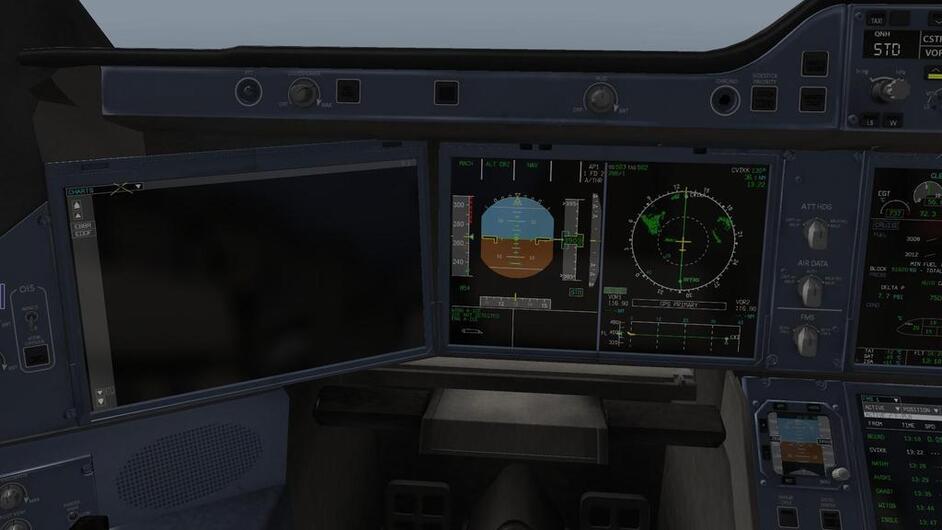 And you can also adjust options. 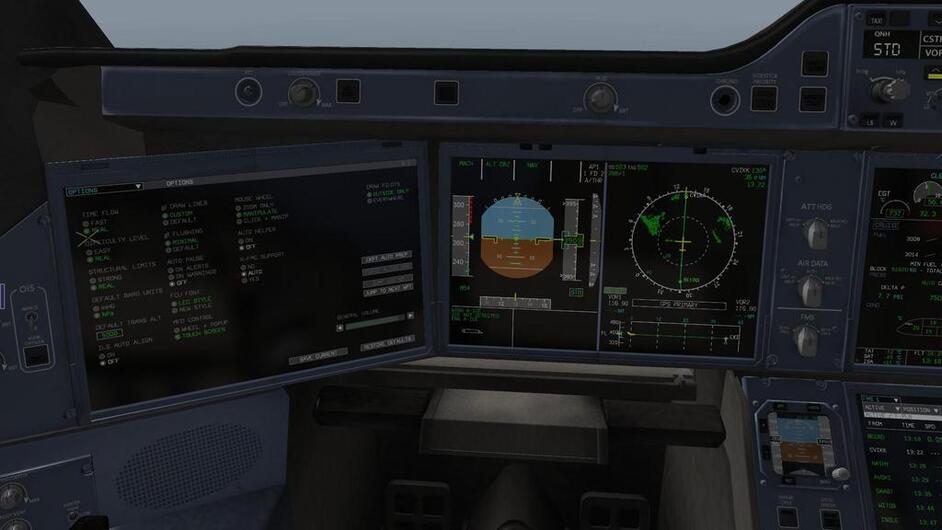 Here is a shot of the C/L screen. Green means complied with correctly and purple means skipped or not complied with. While white means not done yet. 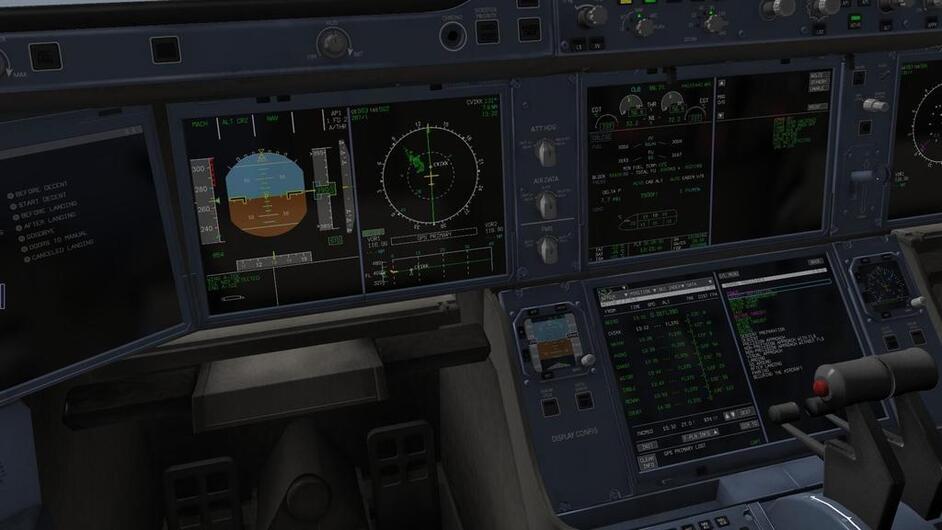 Weather was bad on decent but it cleared up my the time we got to TNCM. 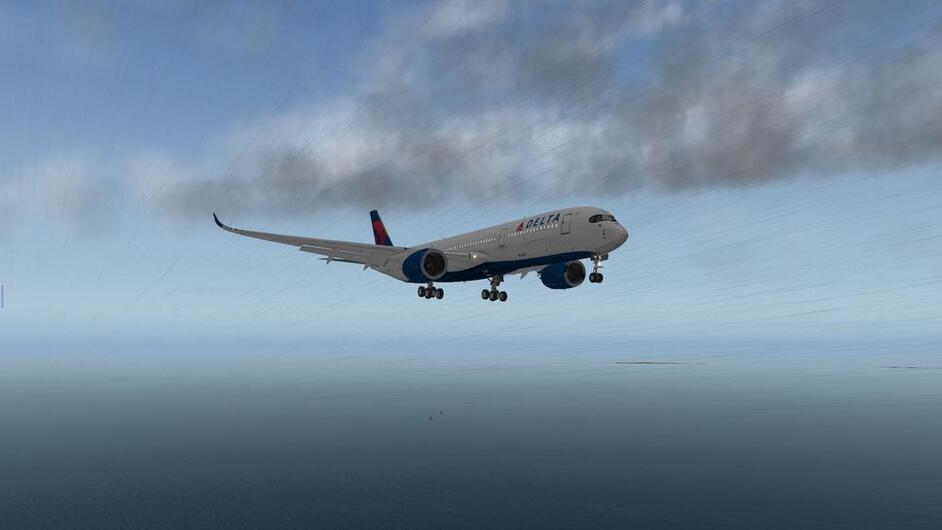 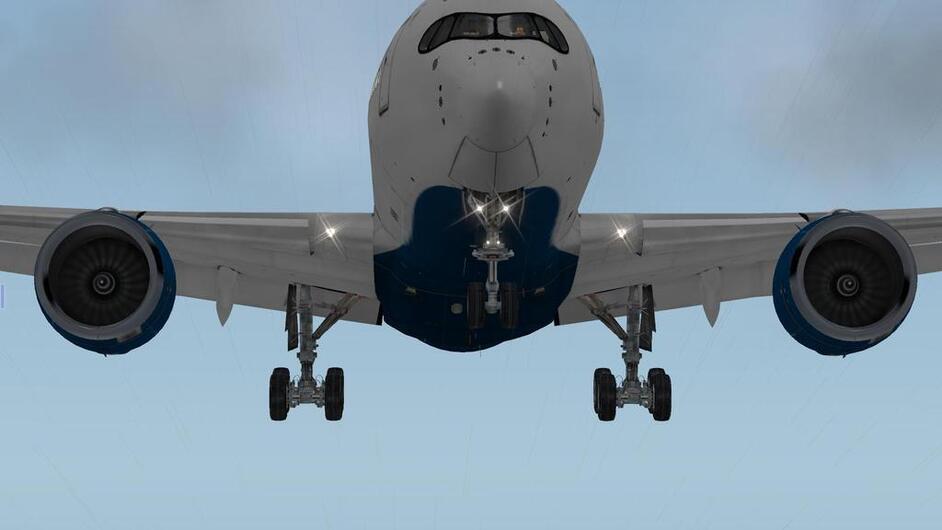 So as we approach TNCM, I realized there was no ILS. Great!!! I am flying a plane that I barley know and could barley figure out how to get it into the correct automatic flight state. Now I need to fly it manually!!! Good luck right???

Throttle was always going to be set to auto so I set my speed to 140 knots and turned AP off so I could line up with the runway. I got lined up and things were looking good but I was a bit high so I adjusted and came in a bit steep which messed up my speed. So as I crossed the fence line I decided I was to fast and needed to go around. Nature however decided my flight was over, I flew through a flock of birds and lost both engines. I sunk like a rock and put it in the drink. The flight attendant informed me, as we sank, that a few of the customers had vomited…

So much more for me to learn but the A350 was such a joy to fly! As always FlightFactor make amazing products.
Sorry about the lack of pictures, I will be taking more on my second flight and posting them in this AAR. So if you have any requested let me know.

As always thanks for reading and I hope you enjoyed it!

Airbus loves automation. An old and tasteless joke I’ve heard goes something like: The last statement from the aircrew on cockpit recorder from a crashed Airbus: “What’s it doing now?”

Great pics, nice read, bummer about the landing. Sticking a landing, especially a difficult one, is a great reward.