As fate would have it I am in California to attend a 4-day Robinson Pilot Safety Course at the factory. I went to the website to get the address and saw this…

There were already few enough of the 20th century’s truly historic aviation minds still walking among us. Now one less. Frank brought simple, lightweight design to the helicopter world. His helicopters have naysayers by the hundreds, yet they (the helicopters, not the naysayers) are all magnificent. Few flying machines are as responsive to the touch as the R22. No helicopter has had a wide GA appeal that comes close to matching the R44. It’s not exactly pretty. It certainly isn’t glamorous. But for a generation nothing could touch it for cost over function. Frank’s tri-hinge rotorhead, now that I can understand it, is a masterpiece—a simple solution to a complex problem.

Tomorrow should be interesting.

Now, as you know, I have very little experience from helicopters, but the aviation business being what it is, it’s almost impossible to not know someone who fly or did fly a Robinson.

Seems to me that the biggest safety issue with the Robinsons is what made them so great:

Robinson made helicopters much cheaper to operate and suddenly everybody could afford to get a license, start a flightschool or small heli business. Now, aviation is unforgiving, and helicopter aviation especially so. Maybe everybody wasn’t made to fly helicopters…

I’ll do my best! It is oriented towards new CFIs so not everything on the syllabus will apply to me. But parts should be fun—certainly the factory tour will be.

The Robinsons are really unforgiving to two fixed-wing pilot instincts: the tendency to push the stick to recover from a zoom climb or to begin an aggressive dive and the tendency to sit in utter disbelief instead of acting immediately when the engine quits. Heavier helicopters with teetering rotor systems, like the Huey and the Jet Ranger, are way more patient to to these tendencies. But that incredibly light rotor which Frank’s genius made possible requires strict adherence to helicopter techniques or fatal things happen. 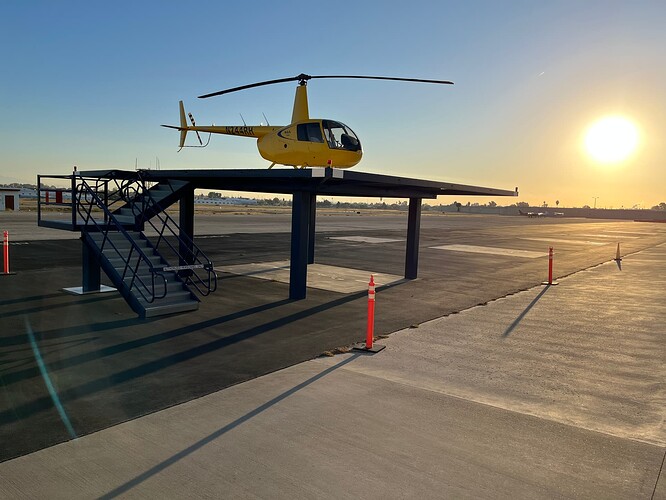 To the tunes of The Beatles Yellow Submarine:
We all fly in a yellow whirlybird!

I “learned to fly” a sim Robinson (default in FSX) while working on my simNovel “Pliates Ghost”*. I cannot remember why I went with that sim for the last Mission but it ended up very cool. Chasing a hovercraft down the Rhine river and then landing on a catamaran yacht…finally coaxing the damaged helicopter back to shore. I put in many hours building and testing that mission and got to really like the sim. I ended up purchasing a 3rd-party model that was more realistic and also a blast to fly. Sometimes the simple aircraft/sims provide the most fun.

that sounds interesting, if they will provide any free documentation feel free to share

It opened with a 1 hour introduction by Kurt Robinson, son of Frank! Two days after his father’s death! Amazing!

Robinsons (and e-cigs*) are cool.

The only documentation they’ve handed out are items that can be downloaded free from the robi website. This little helicopter adventure has been, if nothing else, a period of constant learning. Every hour I am reminded of how little I don’t know and of how my certain knowledge of things was utter bs (or at least woefully off the mark). Back when I signed up, I felt a little regretful at having paid for this course. I mean, there a good chance that I will never sit in another Robinson. The regret was vaporized in that first hour with Kurt. There is a lot of death on day one though. Robinson has many thousands of hours of footage not available on youtube. It got pretty disturbing at times. The factory tour was way cheerier. A million sq feet of stupid clean. When I get back to my hanger I am going to kick my helicopter for being the pos that it is

. I sweep the floor every other day I’m there. But still there are wood chips, metal filings, fiberglass dust, rivets, mandrels everywhere. I’d sooner drink gasoline than walk barefoot in my hangar. But Robinson? A baby could crawl anywhere on the floor and probably be far cleaner than she would at home.

Helicopters are cool! That kind of close to the ground cow herding cowboyflying certainly is cool.
But it comes as no suprise to me, that accidents occur.

We see the statistics here in Norway too. The GA helicopter business has an appalling safety record, while the off shore heli industry is stellar.
The difference between these two types of operations is huge!
The type of flying, the hardware, pilot training and multi crew, all makes a difference.

no prob, there is enough materials also on FAA site relating helos and safety.

there is definitely lot of cool things out there. like you can fly some flying apparatuses in US even without license. you can ride bikes or quads in t-shirt and shorts almost everywhere … hard to say what we value more, some bits of freedom or rather safety !? and its up to us individuals or up to system to tell us !?

disclaimer : I dont need answers to above questions

I dont need answers to above questions

And I don’t have them.

Airplanes are not easier than helicopters. But they are WAY more forgiving. Robinson is a victim of its success. There are hundreds of people who own and fly them and who frankly have no business driving a car. The back of any Robi manual (download for free on their website) has a bunch of safety notices (SN) in the back. They are chock filled with gems of wisdom about how the lack of discipline and supervision kills owner pilots ESPECIALLY owner pilots with strong fixed-wing backgrounds. Oddly enough, it’s not the “cowboy” flying like that in the ad that hurts people. That girl clearly knows what she is doing. She’s in a light helicopter at a relatively low density altitude. She has gobs of kenetic and potential energy to reach for if things get sticky.

Pilots like me who can’t hold a candle to her die from wires, weather, low rotor RPM, high DA and/or tailwind approaches and mastbumping.

I’ve thought a lot about this as I get older. Some of the things that I did in my youth are unimaginable now. In my simple way of understanding, I write most of it off as the difference in testosterone levels as we age. Surely, experience plays a part, as in “what doesn’t kill you, makes you smarter”. Or, “There are many old pilots and bold pilots, but not many old and bold pilots.”

Off to find the YT video of a 206 madly slinging Christmas trees.

Speaking of Robinson, I remember the discussion that we had around mast bumping and your collective dumping incident. When I was tooling around virtual southern England last night in the G2, I was wondering if I would have the correct control input to the same situation, and if the Cabri’s rotor head design is similar to the R22.

This is what I meant in my first post. The Robinsons ‘fault’ is being cheap enough so ‘everybody’ can own and operate one

She has gobs of kenetic and potential energy to reach for if things get sticky.

I’ll take your word for it. And for the record, I never said that pilot didn’t know what she was doing. It’s just that advanced flying close to objects and ground, doesn’t have the same safety margins as high altitude straight and level passenger transportation. And when the above mentioned ‘everybody’ sees a video like that, and then looks at their own little Robie, just sitting there in the hangar…

And, flying small helicopters, herding cows or reindeer, slinging cargo or checking powerlines has risks. Ironically, those are the first jobs a new heli pilot can get, over here anway. When they log enough hours of that, they can land a job with the offshore busses.

When they log enough hours of that, they can land a job with the offshore busses.

That kinda explains why the offshore guys have less accidents. They are the ones that survived…

The loss rate in GA heli isn’t that bad…!

But having a bigger helicopter, with more engines than one, instrument capability and a collegue in there with you to share the load, certainly helps.
It’s more or less the same dynamic in the fixed wing world, but with less demanding operations.

I’ll take your word for it.

You shouldn’t have. I was wrong about that for numerous reasons. Tim Tucker is talking about it now.