So I have a bunch of FSX add-ons. Aircraft, scenery, airports, ORBX, FTX, etc… The problem is - the documentation for most of the modules is spread all over the place in the FSX directories (or other file structures). Yes, you can usually access FSX: Steam DLC documents from your Steam page, but still, it would be really nice if ALL mods put their documentation in a single location that could easily be found by anyone (for instance /FSX/DOCS/MODNAME FOLDER)

To find the Steam DLC documentation you have to navigate to: Steam/steamapps/common/FSX/DLC/ and then there are a bunch of folder with numbers that don’t even have any clue as to what they are: 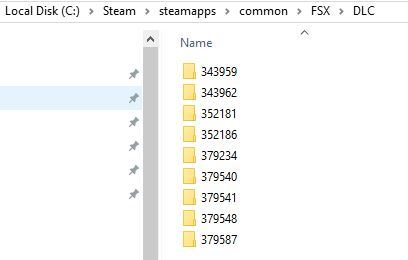 Then, individual non-Steam add-ons just place their stuff wherever their proprietary location is. For instance Just Flight puts their stuff under FSX/JustFlight/146200

Any-who. I know it will never happen. But it sure would be nice if there was ONE “DOC” folder that had subdirectories for each developers documentation.