@BeachAV8R, @EinsteinEP and I chatted about doing a ‘2015 Mudspike Awards’ article thing, but we all sort of umm’d and aaar’d about the format and the selection and you know, all the hard details

Given that we are (taps on calculator) about 9 days away from 2016, here’s the question to you all:

What are your top three candidates for best title (including DLC) released in 2015?

So, please answer on this thread with a top three in any order if you can’t decide. You can post as many times as you like, as in try to persuade others why they are tragically wrong about their choices. If enough people respond then I’ll gather them all up and we can do a poll thing for a final vote-off. The final winner will receive a Mudspike Piece of Coal or something.

Here’s mine, in no particular order.

A huge step up for DCS, and something that made me fall back in love with the A10C after years away.

Great times with my kids, as well as playing alone and just something that feels fun without being trivial or stupid.

This is a game about two hipster 18 year old girls, and the struggles of coming of age in contemporary small town Oregon: In short, the absolute last game I’d recommend to a flight sim forum. That out of the way, the combination of art, music, and story direction as well as the stellar voice acting of Ashly Burch and Hannah Telle overcome any gameplay complaints I have (and there are legitimate ones) and easily make this the most personally resonant game I’ve played all year, if not ever.

Kojima games are an acquired taste, one I generally do not possess. The story of MGSV is no different: however unfortunately attired snipers aside, the gameplay is probably the best marriage of open world gameplay (and the world(s) are beautiful) and stealth mechanics I’ve seen. That and a spectacular 80s anthology soundtrack easily make this my favorite stealth game since Splinter Cell: Chaos Theory.

THIS is how you make a Sim City game in the 3D era. I am angrily staring directly at you, EA.

By rights this is the best game of the year. Story line, graphics, mechanics, it’s just a class above everything else. However it is so deep, so rich, so dense that I just cannot get into it. @klarsnow has hyped me up so much on the witcher-verse that I cannot play the game for more than two hours before the creeping dread that if I don’t complete every task in a given area I’ll be missing out on some beautiful story line or will cause some horrible reprecussion down the line that I just put the game down and go do other things.

Fallout 4 brings welcome advancements in many areas to the Bethesda-Gamebryo pantheon of games. Most striking to me was their vast improvement in NPC characterization and general story telling. That said there wasn’t anything done here that The Witcher didn’t do better.

The new graphics engine is like heroin for my eyeballs.
つ ◕_◕ ༽つ gib NAVAIR pl0x.

My GOTY is The Witcher 3 - by a long shot. I was skeptical when they announced it would be open world. I enjoyed TW1 and thought TW2 was really good so of course I had certain expectations but I was a bit worried they might fail to deliver on their promises - mixing open world with great story telling seemed an almost impossible task in my eyes. However CDProjekt RED managed not only to deliver on their promise, they exceeded my expectations by far. It’s just a fantastic game. I played through it twice and now I’m waiting for the expansion. When it releases I will start my third play through.

Mirroring everything that Near Blind said about Life is Strange, it is a game that I scoffed when he told me about if for a good 3-4 months, and then finally (mostly to get him to shut up) I played the first episode.

It now stands out as my GOTY and I would recommend it to anyone to give it a try. It takes a teen drama/ storytelling game and turns it into something incredible about friendship, growing up, and what choices and decisions mean.
It wont be for everyone, and I guarantee some people will bounce off the teen dialogue and hipsterdom that is presented in the first thirty minutes,(I spent those thirty minutes wondering what the hell I was playing) but the presentation, design and storytelling quickly overcomes any of that and almost in spite of it makes you fall in love with and get invested in the characters.

The Witcher 3,
Having read all of the witcher books in the lead up to the Witcher 3’s release and having enjoyed but never finishing the first or second games, I was pleasantly surprised by the Witcher 3.
It almost perfectly captures the spirit of the books, and I love the fact that in this big open world RPG you are playing a defined character (who is exactly like what is in the books I might add), instead of the typical make your own story that these types of games usually go for. It also gives you enough options to make it your own playthrough, with tiny decisions made early on having huge effects later. And seemingly minor characters will have story arcs that can give you a solid gut punch, or can lead to much more investment than you thought.
Also the side quests, dear god they figured out how to make side quests not boring in an RPG, although they can still fill up time it never feels like it is wasting your time, and it is always engrossing to be involved in this world. Highly recommended.

I cant think of other games that have released this year that have had similiar impacts, MGS5 is also brilliant and I echo many of the comments Near blind has said on it, it just hasnt involved me as much as these other two. Otherwise I have mostly been playing the same old DCS, Arma, FSX, etc that I have been playing for years.

So I am always behind the times when it comes to games. It takes me a sometimes years to play a game everyone played when it came out. For example I just started Elite: Dangerous this year but of course not a 2015 game. I also got a lot of mileage out of the Long war mod for X-COM but again, not this discussion. I still do not own The Witcher or Fallout 4, but will someday. 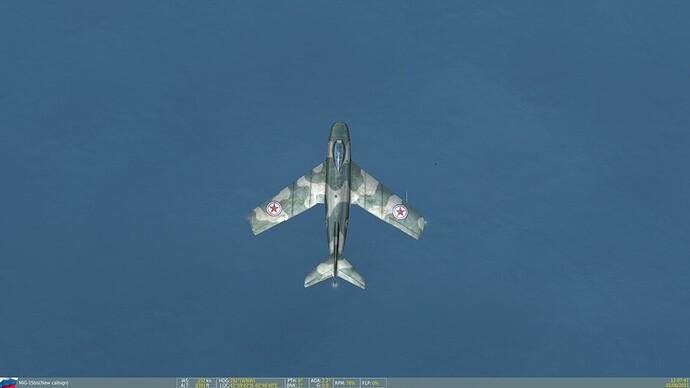 I didn’t think much of the Mig-15 for DCS when I bought it, just a “rounding out the hanger” kind of purchase. I remember getting in to the cockpit to set my controls and pausing, wait, this is really cool. You know what, why don’t I just taxi over and take her up and…Whoosh, all she wanted to do was climb OUT. I was hooked. As a flight sim and a subject matter, it’s just nothing short of sublime. Listen, I love the F-86, but when an aircraft designer can make a plane that is completely ahead of the curve, not to mention make the west sit up and go Whoa! and then Oh Crap! It’s an aircraft worth spending time with. It has quirks, yes. It’s not that easy to fight in. It will try to kill you in several flight regimes. There are tasks that it is clearly not good at. The F-86 is better in most respects. None of that matters in terms of enjoyment, and yet all of that matters when you take it up for a spin.

I often think of this aircraft when I think of the current state of flight sim development and maybe the pickle we all find ourselves in as sims fans (and developers!). It is so well modeled, so realistic in the way it flies, the cockpit so well rendered in its throwback way, that anything less foisted upon us as a product won’t do. The mid tier market of semi-modeled planes is all but gone. We now wait through interminably long development times for the whole package, not some of it. I might be over stating that but I think its a fascinating discussion so there it is. Everyone reading this will have their own version of the sim/plane that they hold as a benchmark that they wish other sims matched. This is it for me (ok fine and the 109k) - when DerbySieger is reminding me to watch my dive speed because the compressability is lethal, the flight model has done its job.

I mean, it talks to you! 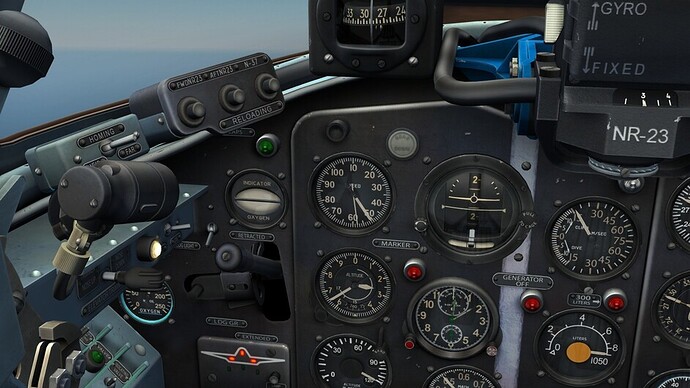 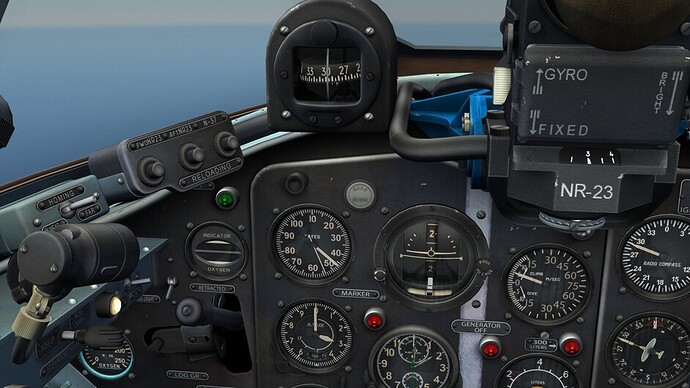 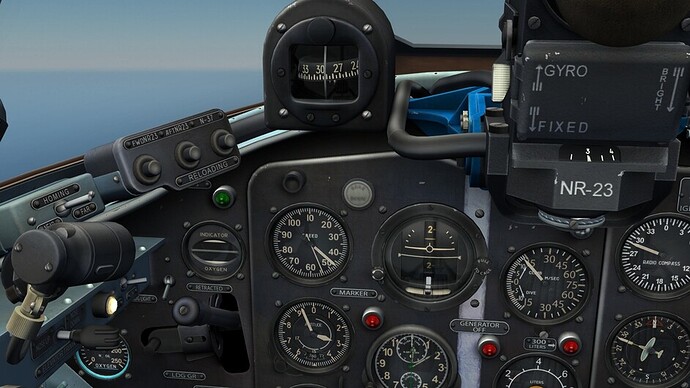 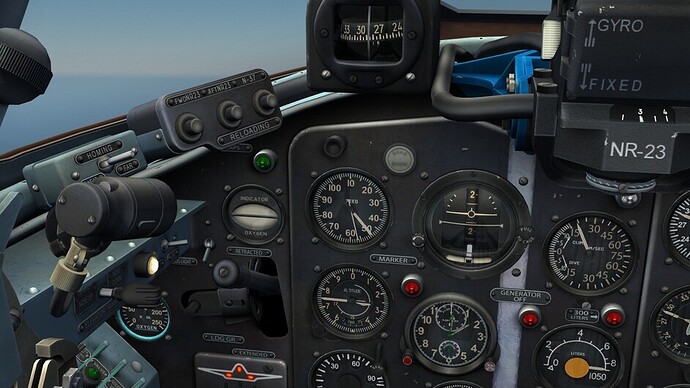 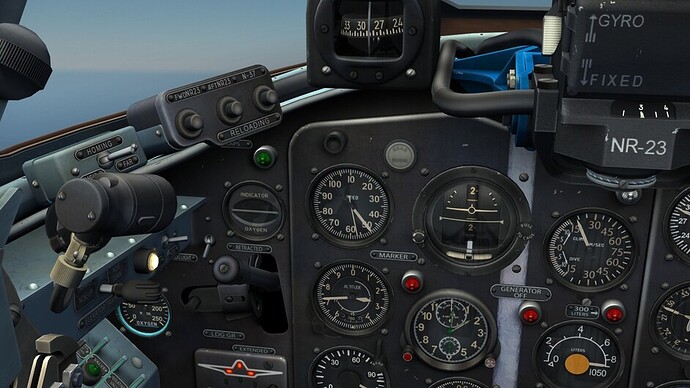 (Mig-21’s are still for shooting down though)

Those are my personal two.