Good afternoon everyone!
There was something that had me squeezing my brain for the longest time, related to games.

How to I prevent the risk of buying the same game twice on different E-Shops?
How do I keep track of what I games I own when they’re spread among so many different launchers/services?
How can i handle more efficiently my games’ MONSTROUS (and still growing) backlog?

Well apparently I’m not the only one because I found something called Library Managers.

These are utilities that can aggregate the different profile for E-shops/Stores/gaming services into one large container, so to speak.

I reiterate: These DO NOT download games or change anything in/around your Hard Disks, but simply create a collection of all the titles you own, like a filing cabinet but of easier browsing, being electronic and usually containing a search engine and being completely configurable.

So in the last few days I tried some of them and I’m here reporting some findings.
Surely in the great wide interWebz there’s better summaries for these types of software but at least, coming from me, you know that we can discuss them, or at least I can promptly answer any questions you might have.

Disclaimer
Many of these programs are indeed free or only have few features protected by a paywall but all swear that they are secure.
I did my research and all of them do indeed present some safe sides, but not being a certified Ethical Hacker I can not promise anything.
What I’ll do is adding a direct link to the programs main page so Y’all can check personally what these users say about their programs.

TL;DR : I decline any responsibility that come with the use of these programs.

THE SOFTWARE
In this ongoing thread I’m going to try the following ones:

This thread is a work in progress and as such I’ll try to keep each system separated to allow for a simpler way to respond/ask questions.

First One I tried was LaunchBox:
This one is free with some pay-for features that are interesting for sure but not that important.
Your Mileage May Vary…

Installation is painless but the UI is somewhat dated, not that important honestly, as it did flow quite nicely nevertheless but somehow it feels like they didn’t bother too much about a refined product.

Overall usability is pretty nice despite the fact that adding games libraries is surprisingly not as simple as one would think.
Mainly it boils down to having the “Add game library” somehow buried at the third level of a drop down menu when I would have put it as a right click-direct access feature but what do I know?
Also you can only add one Library at a time and it takes considerable time too…

All in all what’s really great about this is the community content.
For each game imported in your LaunchBox you have the choice of a wide array of creations (screenshots, short videos, alternative covers, etc. etc.) to download for free made by the community.
These are very high quality stuff.

During the import phase there’s another very readable (but still sort of hierarchically rich) User Interface that allows to select with few clicks what of these to download - even none at all.
I really liked this, because some of these things eventually turn into several hundreds of MegaBytes of extra stuff that I’d rather leave free for more games.

Is it good? YES!
Is it Free? YES, but PARTIALLY.
Why did I uninstall it? Well - it’s a two pronged issue.

First- some games are simply not seen. When I imported, for a test, my abysmal Origin games library (10 titles in all) only 5 were recognized, and those left out were also Mainstream games, not some obscure Indie release…
When I added my Steam Library another good 15% was left out again.
In both cases a good 10% of imported games had somehow a wrong cover.
This is mostly due to Community content interfering with the original one, I think.

Second- When I tried to add those missing games I realized once more that the UI makes it quite a chore!
No less than 20 clicks are necessary to add a single game.
Now, I have over 600 games on Steam and adding each one of the missing 15%, with 20 clicks at a time, just makes it not worthy.

Maybe with time I could learn to love it but since there’s many other offerings on the table I decided to move on.
Should I not find something better I might even go back to LaunchBox - but I honestly doubt.

The second is probably also the second most famous, GOG GALAXY 2.0: 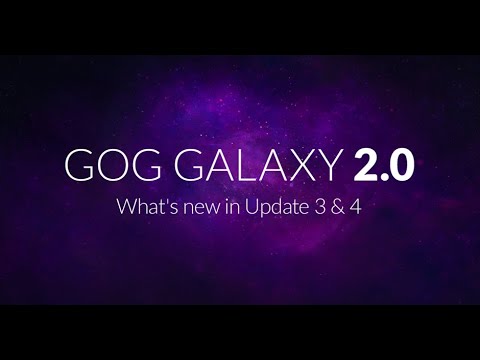 Interestingly it not only allows mainstream E-stores but any sort of games- included arcade/emulators/retro virtual consoles and so on.
This (surprisingly for me) includes as well Steam, Origin, Epic store, Retro-Arch, you name it…

I intend to download it tonight and try it out…

I like gog galaxy 2.0 runs very well on both laptop and pc

I’ve been using LaunchBox for years as my primary front end software for . . . everything! Highly recommended! Playnite is also really good, not quite as popular yet, but it improves with every update! They both have the ability to “scrape” your library, and add everything automatically, with as much, or as little input as you see fit. 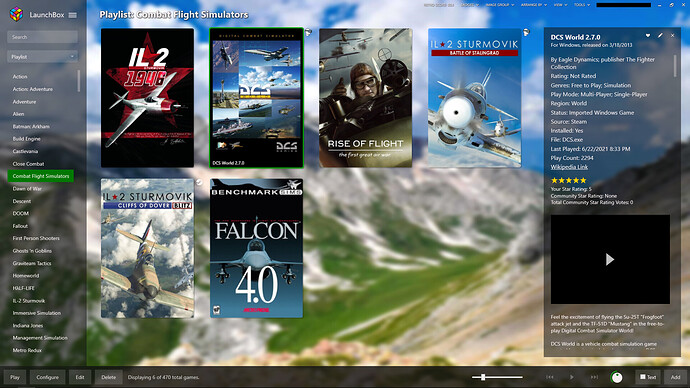 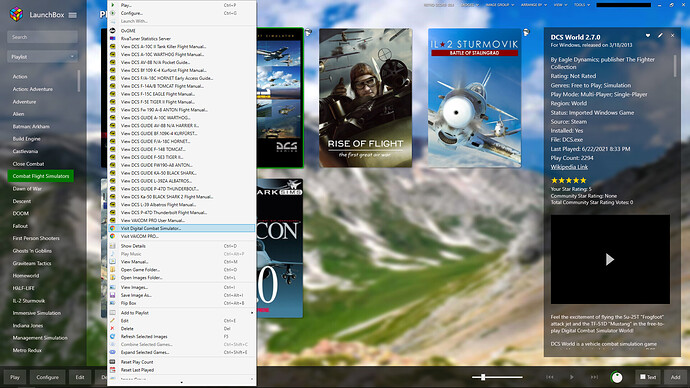 Note, that you can add “additional apps” to the context menu, which allows you to add shortcuts to just about anything!

I agree with you, and despite my preference, LaunchBox isn’t as “hands free” as it could be. I’ve been using it for so long, every game I add now is done “by hand”. I personally add and customize all of my games now, not because it doesn’t work, but simply because I prefer to customize both the media and the meta data myself. 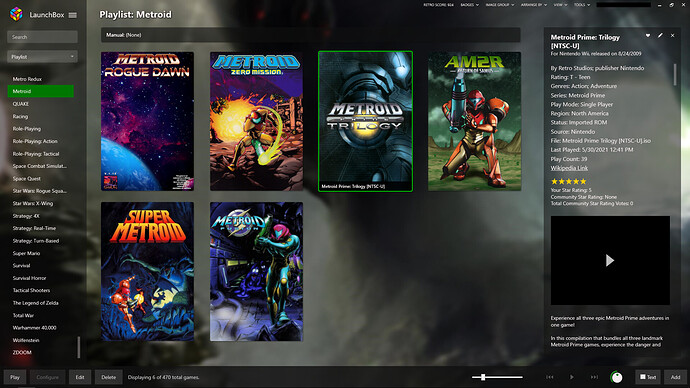 So, I finally came around to try Galaxy 2.0 and I must admit that’s pretty much great.
So much so that makes it my now-favourite choice when it comes to Organization. Full stop.

There’s metrics for the most basic & important statistics, ease of adding accounts and games that aren’t PC based - all of that with related screenshots, covers and in many cases short videos.
(If I had to point out something lacklustre is probably the anemic quantity and quality of those screenshots/video, but if anything else makes the install footprint small-ish) 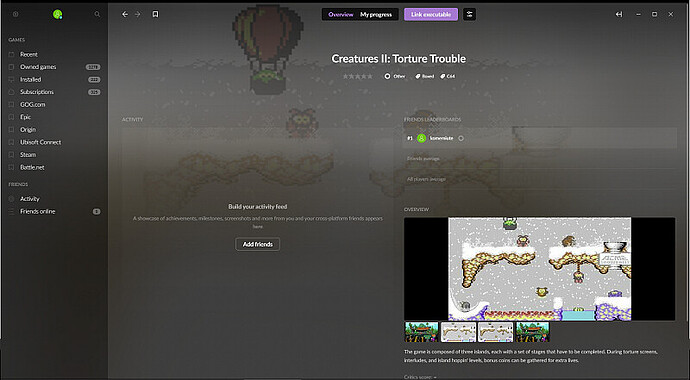 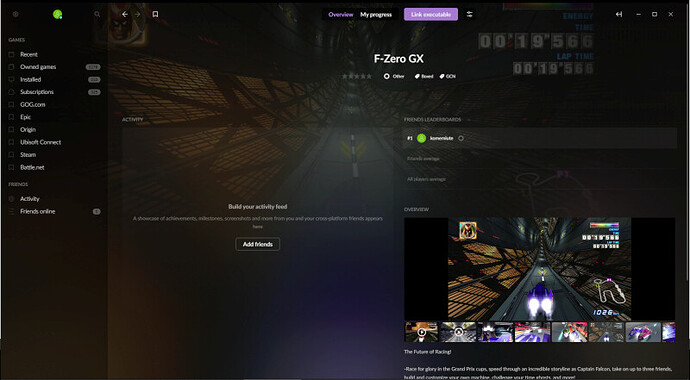 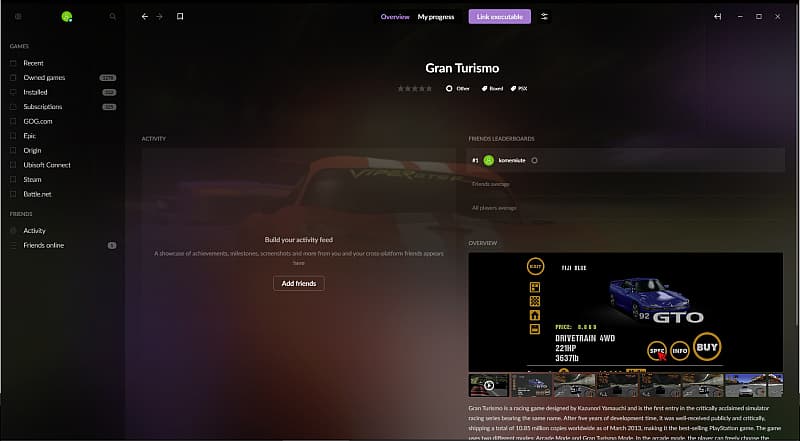 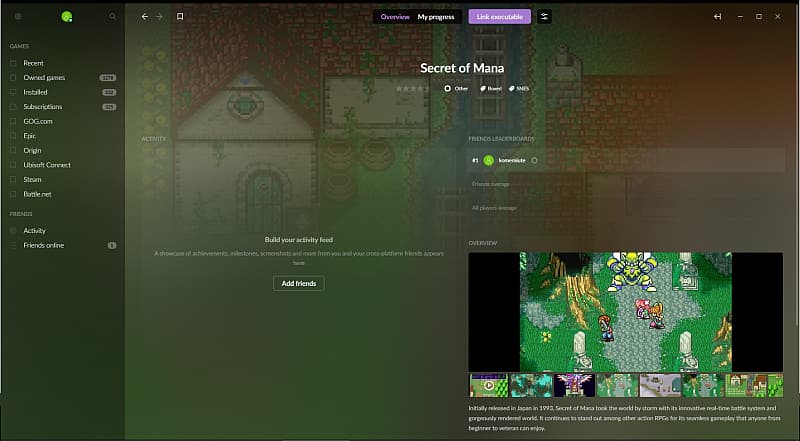 Each game can be assigned a number of tags, there’s a slim and efficient search engine, and the list can be sorted by a dozen parameters, including the Metacritic score OR your personal one-to-five-Stars rating.

All of this paired with a completely personalized filtering system, with customized icon or list view, allows the user to create their own list and to pick what to play next with ease.

For example (blurring for emphasis mine) 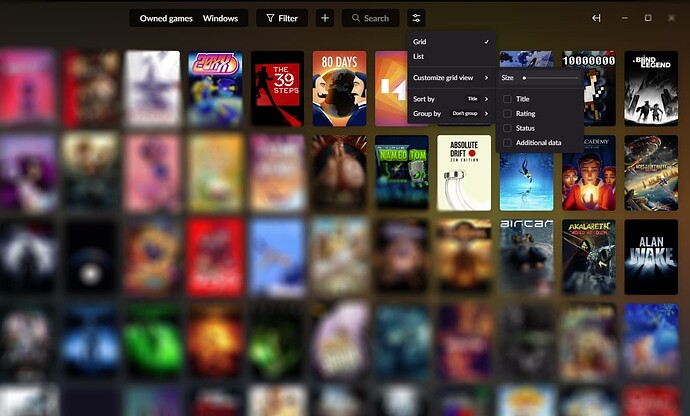 The base view can be a bit simple and boring- the colour of the background comes from the last game you visited, in your list. 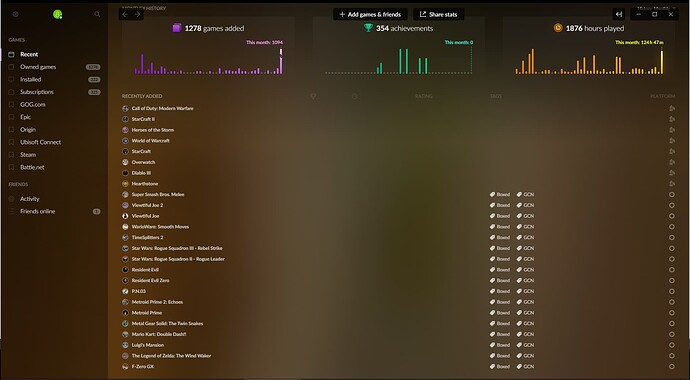 So in this screenshot I organized titles in Alphabetical order, grouped by Metacritic score, in a customized grid with small icons. It took me a few seconds and fewer clicks… I like it! 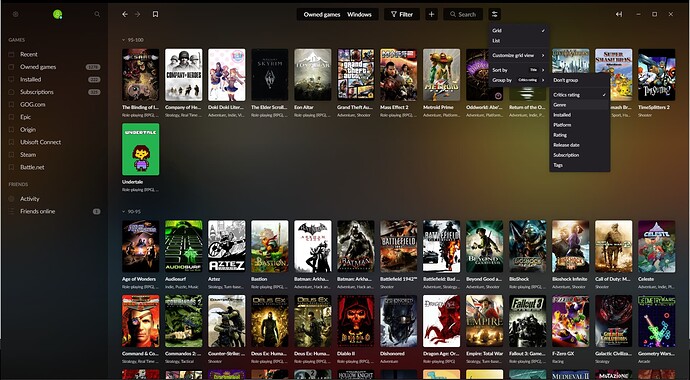 Easily the winner - light, compact, solid, and it recognized “Flight of the Intruder”. 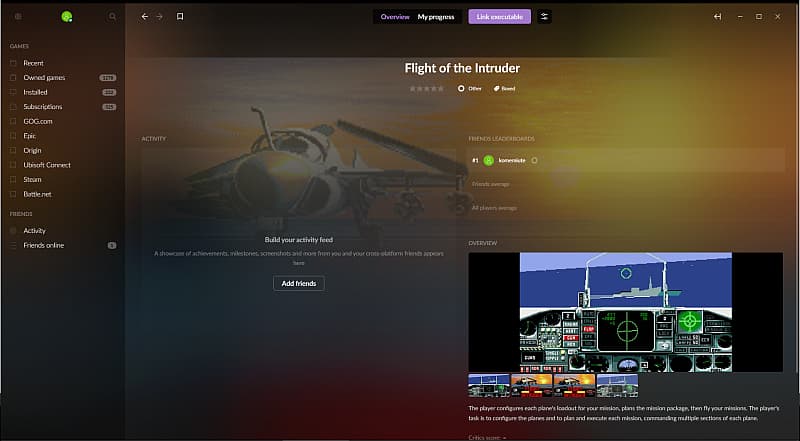 I have used galaxy pretty much exclusively for quite a few months now. Its really good. Be handy if they made a mobile version as well