Getting attacked when landing A successful tactic during the real war as well…

He finished the war with 11.5 official victories, including one of the first air-to-air victories over a jet fighter, a German Messerschmitt Me 262 that he shot down as it was on final approach for landing 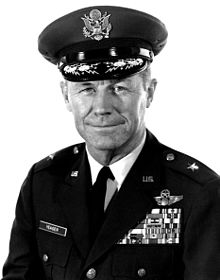 Yeager enlisted as a private in the U.S. Army Air Forces (USAAF) on September 12, 1941, and became an aircraft mechanic at George Air Force Base, Victorville, California. At enlistment, Yeager was not eligible for flight training because of his age and educational background, but the entry of the U.S. into World War II less than three months later prompted the USAAF to alter its recruiting standards. Yeager had unusually sharp vision (a visual acuity rated 20/10), which once enabled him to shoot ...

We used to call that vulching back in the day. As in ‘vultures circling the airfield’.

In a real life situation I can kinda understand it. It is war after all and that fighter might just kill you tomorrow. In a sim, especially in MP where the game is about having fun with other people? No.

Right. It was a big no-no. Calling people filthy vulchers was about the most insulting thing you could do.

Hadn’t considered it being MP since it looked more like an AI attack to me. Dropping the bombs before you landed the He-111 might have been prudent.

Can’t remember how often the AI strafed me in old IL-2 when I thought I was home safe. Would be taxiiing along all happy I made it home safely and then the screen would go black and the first thing I almost always thought was that the computer had a problem and not that my pilot got killed.

yeah, should have dropped them for sure, was abit concerned i might blow myself up !

In a sim, especially in MP where the game is about having fun with other people? No.

I’m a little late to the party but, although I agree with your statement, have you met the interwebz?

On a more serious note, if it’s a server that deducts resources/respawns per death, then I’d argue it falls back into the “valid tactic” territory.

have you met the interwebz?

I have indeed. Which is one of the main reasons why I rarely play online.