Are any of our American chums on here familiar with the government planet auction site.

Specifically, i cant find any information on whether a Non us citizen is eligible to bid on there. I can open an account but not sure if i can actually use it.

More specifically, i want to buy some ex military vehicles and ship them to the UK but im not sure of the legality of it as the DOD is pretty strict as far as I can see.

Would anyone be able to assist me and give them a call for me and speak like an American asking for a friend rather than a nervous sounding Englishman.
I also need to know about export and shipping to the port, im less concerned about this as any shipper can help me with that but its the export of surplus DOD equipment that concerns me

Never heard of it! I have had one helluva day and I need to decompress before I take on any new tasks today. But tomorrow is a new day! I’ll reach out then if no one else has taken the mantle.

Cheers @smokinhole there is no rush, just something i need to know in the very near future for a small project i want to get started on

But on the website, you can seem to change the country to EU and Middle East which changes the website to a .EU one. The FAQs look like foreign sales are supported.

I read the FAQ bit earlier, but that seemed to not answer the question of whether i could explicitly export ex-DoD stock.

The demilitarised hummers on there i would imagine arent an issue but im specifically after the newly released vehicles that havent been “dot” modified for US roads. So i can buy them cheaper and modify them for UK use a lot easier.

There looked like something there about certain demilitarized codes not being eligible for purchase by non-US citizens.

So, some things may not be available. There are also those US technology export laws that might be an issue. Dunno.

Yeah. Its confusing. Ill have to call them.

PM if you like with specifics or reply and I’ll shoot you my number. Or if you wanna get all gen-z about it, we can meet on Discord.

Thanks guys. Appreciate the help with an unusual request

Give me an hour or 2 @smokinhole and ill write up exactly what im after.

This is one of those mind worms that i have and cant get rid of.

Long story short, ive basically designed a living/habitation camper attachment device that will with little effort mount onto an Oshkosh M1070 and turn it into frankly the most fricking badass overland expedition vehicle you could possibly envisage. No hyperbole, it will be an absolute weapon.

Ive also started to pen up a version that will fit on the earlier and later model humvee.

Now because of the poxy war in ukraine, the M1070 over here has gone from a relatively sensible £35‐40k to 85‐90k but in the states they are relatively a lot cheaper

Hummers have always been mega money in the Uk but ex-dod ones in America are common as horse muck and cheap as hell. Dont even care if they run as im somewhat of a fairly handy spinner of spanners. But i need a chassis to play with.

There is a massive HUGE boom in the overland camper scene at the moment and i desperately want to build one. But i want something that will get some orders.

There was me thinking you were buying the kids an M1A2

Can’t buy the tank without the low loader

M3A1 Stuart for sale at RM Sotheby's The Littlefield Collection

but this would be perfect for you, 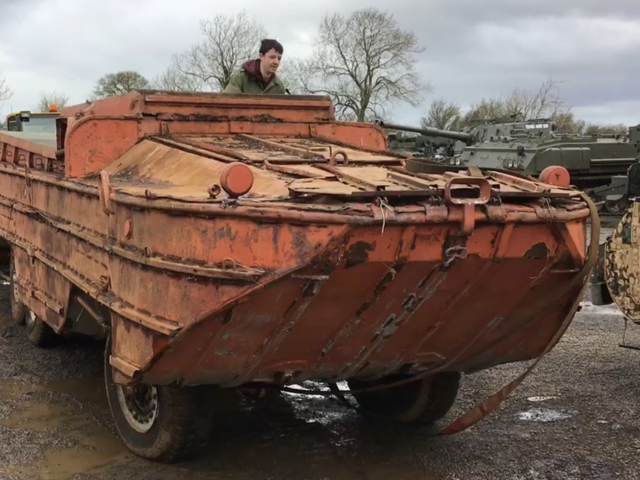 DUKW PROJECT - OFFERS Rare chance to buy a 1940 wartime DUKW reputed to have...

DUKW PROJECT - OFFERS Rare chance to buy a 1940 wartime DUKW reputed to have been on the D day landings. Professionally Retro fitted in the 60s with a Bedford Diesel engine. Starts and drives. Great project we won’t have time to start unfortunately.

Ive had dealings with tanks a lot in the past. Hes a character to say the least.

Same with every other collector/restorer. With truck loads of money, and time, just about anything can be repaired/restored though.