Or…I’m just copying and pasting the Title text to get the video to you all sooner.

You can easily within MudSpike set it to “ignore” all my posts and you can then rest easily.

Elby, we need a Sargent at Arms badge for you.

My guess is that when you post a link in the topic title field, it uses the text and punctuation from the web page’s meta data, in this case the video title.

Thanks for posting these @RedBravo65! I appreciate you digging them up. Half the time I don’t even know that these resources exist. :-

I tested my theory by posting a link of a video in a new topic’s title field, and the forum software replaced the URL with the title from the video exactly as entered. To alter the punctuation, the topic starter would either need to not use that feature or edit the topic title, which sort of defeats the purpose of its behavior, IMO. It’s more the failure of the video creator or perhaps there’s a study that shows that videos with titles in all caps get more views. At least the creator below subscribes to that school of thought. I’m assuming that @RedBravo65 is just dropping in the link, since he has been around forums for a while. But now I’m just behaving like a mudslinger. Regardless, I didn’t take it to mean that he’s suddenly developed capititus. 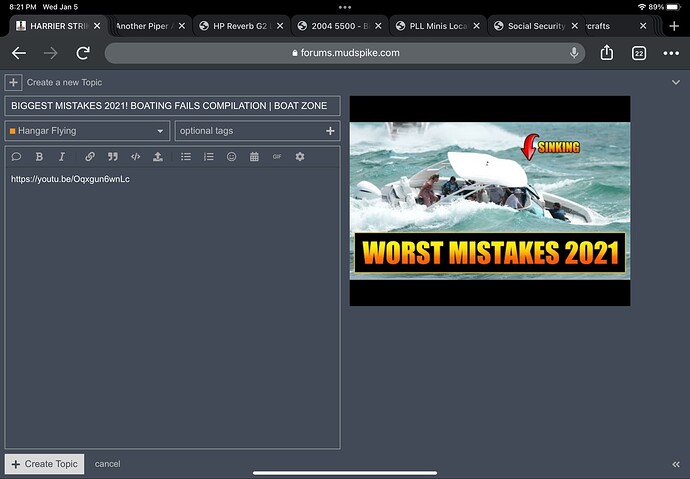 Yep. Actually read that book myself. Good sections detailing some flights in Afghanistan in the Harrier. Might have to revisit it.

I thought that A Nightmare’s Prayer was a little bit of a downer, since the author often times seemed to be questioning the mission. I think also that I was struggling at work at the same time and looking more for something more upbeat. But it was a long war in a far away place, with no clear exit strategy when it was penned, if memory serves. The CAS missions description was interesting. Need to give it another shot now that I’ve got some Harrier sim time.

The CAS missions description was interesting.

Yeah, it’s kinda like TopGun (the movie of course): I was only there for the action parts.

There are so few books on the Jump Jet.

I’m loving the Harrier content. Such an interesting and exciting aircraft. I love how you dig up these cool videos to keep me entertained during those long night shifts. Thanks!!

Zak was my old squadron mate. Interesting dude
and definitely knew his stuff in the Harrier.

Great video! That A was a rocketship.

I really enjoyed his book, even the “downer” parts, I thought it conveyed the realities of the mission well.

nice. btw ‘interesting’ you mean because of the book or because of your personal experience? just asking

While it might seem straightforward to assume that “Zak” was short for his name, Franzak, Zak’s callsign was also short for “Prozac”.

Zak had almost boundless levels of energy and enthusiasm, and he never did anything at less
than full speed ahead.

My two most abiding memories of Zak are as
follows:

Zak flew a lot of my BFM (still called ACM in NavAir in those days) in the Harrier. We had gone on a ACM cross country, flying from place to place and stopping to fight in between. I had tried to take all his lessons to heart but, while I was improving, he would continue to mercilessly gun me, sometimes sooner, sometimes later.

By the end of the trip, I felt that I was somehow missing something since I rarely was able to turn the tables on him and asked what I was doing wrong.

It was the first time I had ever heard that sentiment, but it certainly drove home the point that Air Combat is seldom fair and it’s almost always better to be the shooter than the shootie.

The second Zak story was when the squadron had flown down to Kadena, Okinawa from Iwakuni, near Hiroshima.

We were hanging out in the O’club bar at Kadena one Friday night, when a beer bottle flew out of nowhere and hit Zak in the face, cutting his upper lip pretty deeply.

In what I swear couldn’t have been longer than 2 seconds, Zak had torn his shirt off. I don’t mean he removed his shirt. I mean he tore it clean off.

So there he was, standing there in the bar like some character from Mortal Combat, shirt off, covered in blood, roaring for whoever threw the bottle to come out and fight.

I think the offender’s squadron mates had wisely spirited the other guy away. I don’t think it would have worked out so well for him otherwise.

I was out by the time Zak got a squadron. But I have no doubt that he led from the front, and walked the walk in addition to talking the talk.

thx for the answer, I really like this ‘behind the scenes’ insight

So there he was, standing there in the bar like some character from Mortal Combat, shirt off, covered in blood, roaring for whoever threw the bottle to come out and fight.

Jarheads. Gotta love them. I watched in awe the “play time behavior” of my son and his buds at Pendleton (about 6 months prior to 9/11). “Glad their on our side” was all I could say.

I’m late to the party, but what an awesome video @RedBravo65 ! I love the original Harrier, and this video is probably more footage than I had seen of it up to now. Especially loved that AV-8A takeoff at the end, with the thrust vectoring in the vertical. Thunderbirds vibes!

And awesome pilot story @Deacon211 ! An exceptional colleague for sure!